Getting a better feel for Milan.  Turns out, they do have lots of cool “culture-y” things, they’re just a little more hidden away.  The city also has a long history of incorporating old parts of the city into new parts – Roman towers reused in Renaissance churches, etc.  They don’t consider the past as precious as other cities.

I continue to be shocked at the lack of American tourists.  Honestly, not sure I’ve met any – overheard a potential one today, but I suspect he was South African.  No tour groups just off the bus, no giggling students, etc.  I spoke to a family from Singapore this evening, who said the Americans are out in force in Rome and Florence, but apparently Milan isn’t on the map.  I’m getting ahead of myself though.

Today was all about cramming in culture.  I kicked things off (after finally getting a chance to try a very Culture-y Italian donut -Bomboloni) at the Museo Nazionale della Scienza e della Tecnologia Leonardo da Vinci.  Remarkable place – lots of interactive reconstructions of Da Vinci inventions, plus plenty of reverence for other Italian inventions (Marconi, etc).  In addition, they’ve got a whole building dedicated to rail travel, and one for air and sea as well (with a full size submarine). 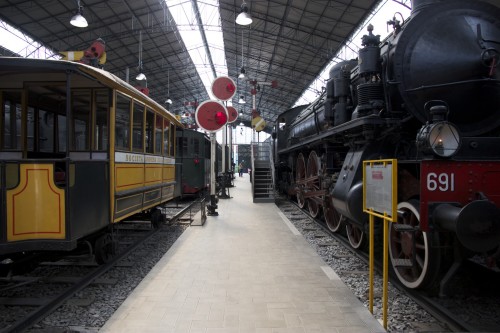 They obviously cater mostly to school groups, with lots of interactive lab spaces, on everything from food science to nanotechnology.  Very well done museum in an ancient building.

From there, I took a trip to the Museo Archeologico, another remarkable use of an ancient space.  The museum is packed with artifacts discovered during excavation and construction within Milan, and contains lots of great maps and stories of the evolution of the city.  They’ve got floors dedicated to the Greeks, Romans, Etruscans and Longobardi.  I’ve never seen as many intact Greek artifacts – or perhaps they’ve just got someone who’s *really* good with superglue.

From there, it was time for a picnic at Parco Sempione, a large public garden.  Very nice time relaxing in the shade by a pond, eating good food, and people-watching.

Next up (whew, still going!) were art three museums – Pinacoteca di Brera (stuff Napoleon stole from elsewhere), Museo Poldi Pezzoli (private collection, now public) and Pinacoteca Ambrosiana (big fans of Da Vinci).  I won’t go through them one by one, because I am very sleepy, but there was much art seen – obviously heavy on the Milanese painters.  Rubens’ Last supper, with Judas staring out, was particularly captivating.  Seeing the actual Codex Atlanticus was pretty timely as well, having spent the morning looking at recreations based on Da Vinci’s journals.

The final bit of culturing tonight was a trip to La Scala to see Don Pasquale.  In that Opera is not normally on my radar, this was a new experience.  I don’t know how to judge the performance itself, but I was suitable impressed.  The set was a three story, full size “dollhouse” (cutaway) that actually folded open like a dollhouse, complete with keyhole.  I shared a box with the aforementioned family from Singapore.  There were plenty of opportunities for people watching of the highest order – Milanese dressed to the nines, Russians draped with models, and nerdy Americans in hiking shoes. 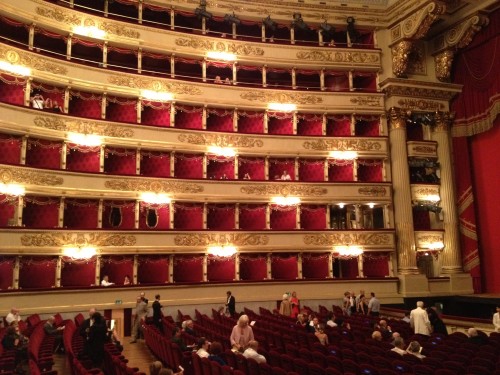 2 thoughts on “So Bloody Cultured”