A day of substantial rain. Surprising how poorly the city seems to deal with rain, given that they get, you know, actual hurricanes from time to time. This wasn’t a torrential event, yet many streets still managed to have a few inches of standing water.

I have an admission to make. I ate breakfast at a restaurant based on having seen it on No Reservations. I know, I’m embarrassed too – take away my traveller card. That restaurant was the Hominy grill – grits, eggs, sausage. I’m sure grits wear thin pretty quickly, but I still find them exciting. 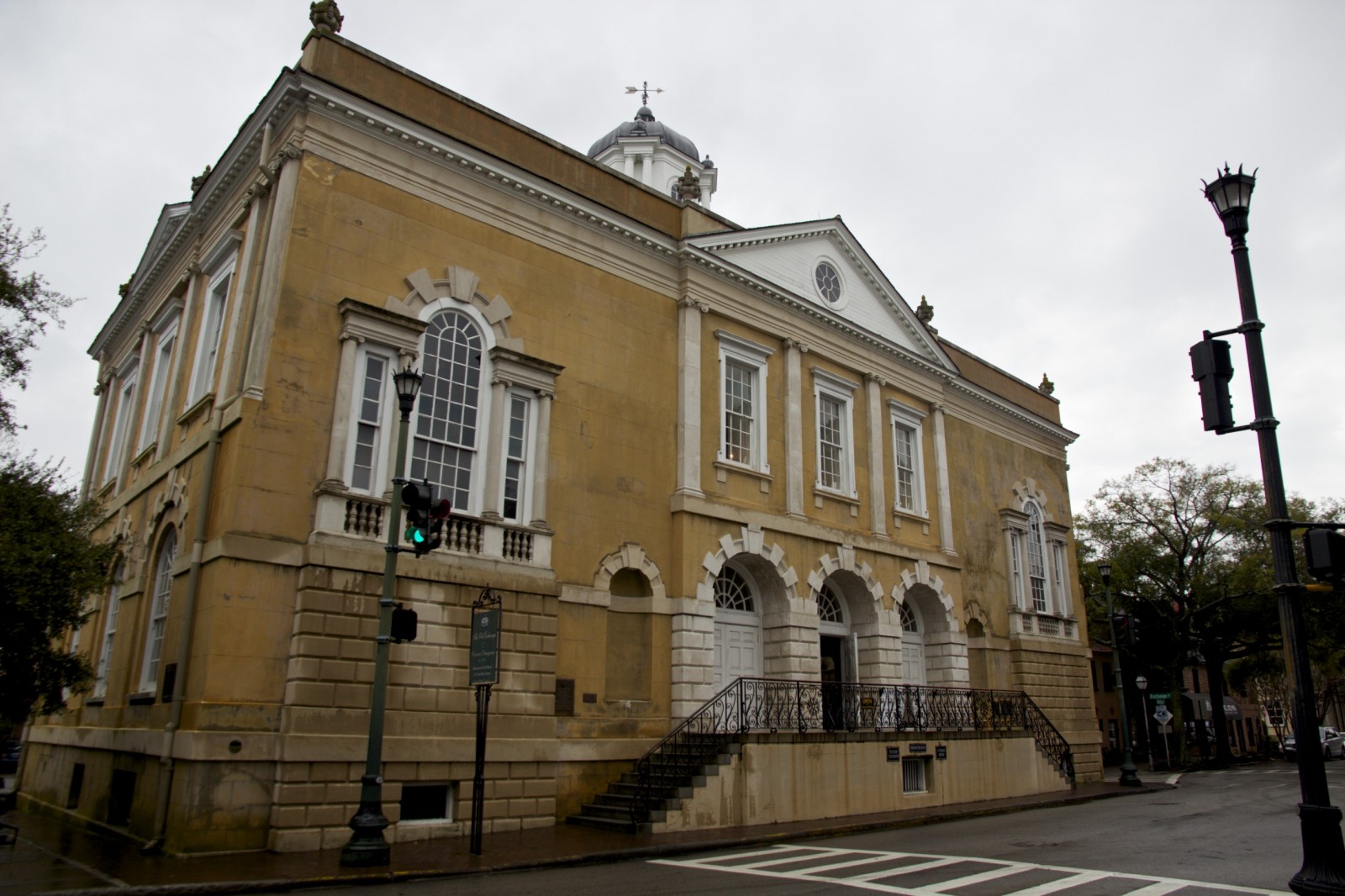 Doing my best to stay dry, I hit a few museums and laid pretty low. The Exchange and Provost is a pretty fascinating building – old and repurposed many times. From custom house to dungeon to post office to museum. Say what you will, but I find it powerful to stand in a room where the Declaration of Independence was read aloud, where the Constitution was ratified, and where George Washington hung out.

An aside – Charleston, as part of its tourism-centric nature, basically doesn’t operate on Mondays. The weekend crowds leave town, there aren’t cruise ships, and the streets are empty. Many shops and restaurants don’t bother opening.

I was the only person on the tour of the dungeon. The very nice tour guide, in indeterminate “period” garb, did the full speech anyways. That was mostly fine, but the speech involves asking a variety of questions of the tour group. Whereas, with a group, it would be a polite “does anyone know what the name of such and such flag is,” when you’re the only one on the tour, it feels a bit more pop-quiz. High pressure! I did ok though, B+ at least.

From there, I swung up to the Old Slave Mart Museum, which is primarily just narrative text telling the story of the slave trade in Charleston. Fine, but not nearly as powerful as it might be. One wonders if that’s not intentional.

A rather drenching walk brought me to Black Tap Coffee. It is, as far as I can tell, the only real snob coffee shop in Charleston. Pour over, single origin, all the proper buzzwords. A nice place to ride out the downpour.

In the afternoon, I visited the Charleston Museum, “America’s First Museum.” It’s got a lot of stuff. It’s rather slapdash. Maybe someone could articulate the narrative, but aside from a few pockets, I couldn’t really see it. Text-filled placards everywhere, stuck to everything.

Not too many photos today, given the rain. Charleston has a lot of vacant buildings in various states of decay. Many look beyond saving, but I imagine that a recovering housing market and an increase in available tourism dollars will continue to spur rehabilitation.

I’m a bit of a contradiction when it comes to pedestrian issues. I’m an avid walker, and hardly drive on a routine basis. I’ve been involved in pedestrian safety issues at a neighborhood and city levels, and consider myself pretty well versed in the research.

I also love to drive, often for the sheer joy of driving.

These two sides of my personality give me a particular set of biases in terms of what I look for in a pedestrian-friendly city. I’m very critical of the type of driver-hostile policies and engineering solutions sometimes proposed by the most intense safety advocates.

Charleston is somewhere in the middle of the pack when it comes to walkability. It’s not intentionally anti-pedestrian the way some of our cities are (I’m looking at you, Las Vegas) and it’s not so sprawling that walking is impractical (that’s you, LA). But it’s far from the top of the list – I’m spoiled living in the Twin Cities, but other great pedestrian cities I look to are Barcelona and DC.

There are a few things that make walking here a bit tricky. First, many intersections with traffic controls lack walk signals. Normally, I wouldn’t consider this an issue, but there are also a lot of one way streets here. Without walk signals, if you’re walking against traffic on a one way, you often have no way of knowing which direction has the right of way. That’s especially true here, as placement of traffic controls make them impossible to see from certain corners of one way intersections.

Another issue, related to the preponderance of one way streets, is a lack of signage visible to pedestrians. I’ve come across a number of intersections where there was no way as a pedestrian to tell which streets I was on.

I’ve seen very few bumpouts, crosswalks, or other engineering solutions designed to make crossing easier. Worse, there are a number of areas where the “sidewak” is level with the roadway, with no median. That makes it very intimidating – a wandering car or a jerk out to harass walkers can easily stray into your space.

Culturally, it seems like a mixed bag. Most drivers are relatively respectful of folks crossing the road, but I haven’t seen a single case of a driver stopping proactively to allow someone across. I had one incident involving a person in a Jeep who wanted to right turn on red intentionally threatening to run me over, to express their frustration with me (I was crossing with the signal). These sorts of things happen everywhere, but some cities (San Francisco) seem to strike a better unwritten agreement between pedestrians and drivers.

So, a mixed bag. It hasn’t stopped me from enjoying walking the city. And it could be worse. Could be Dallas.

Today was a “walk and gorge” sort of day. The basic plan was a walk to Sullivan’s Island via the brunch at Gullah Cuisine, then back. When all was said and done, it ended up being about 27 miles – not a bad day’s work.

Getting there involves crossing the rather impressive Arthur Ravenel Jr. Bridge. While it’s no Millau Viaduct, the scale is still pretty serious. Lots of folks from the Citadel out jogging the 2.25 mile length of it in the morning. 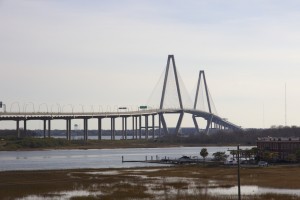 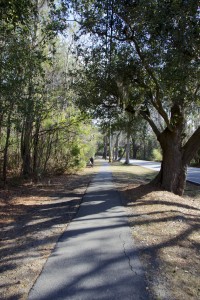 The reason I wanted to go to the Gullah Cuisine sunday brunch was (in addition to their strong Yelp rating, etc) that the buffet format afforded me the chance to try a whole bunch of low country and soulfood items. The vast array of choices for sides down here is a bit overwhelming. Two rather massive plates later, and I’m feeling like I’ve at least got a good sense of the options available. But, further research is required. 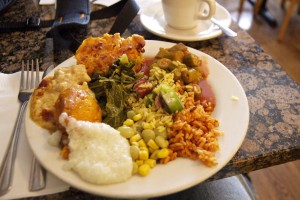 From there, it was only about 6 miles to Sullivan’s Island. Very much a beach-resort, there are cute cafes and fancy cars in volume. I can only imagine what it’s like in the summer. I wandered the beach a bit – intense wind, but always nice to enjoy some salty air. 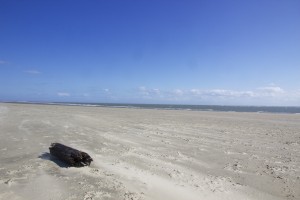 The walk back, with a side trip into downtown for an espresso, brought me to the Tattooed Moose. A bit north of a city, and in the sort of neighborhood that I might think twice about wandering around too long after dark, it’s a cute hipstery bar and restaurant. Honestly, while hunting for a casual dinner place open on a Sunday night, I came across their menu, and when I saw a sandwich that combined pork belly with homemade kimchi, I knew I had to go. It did not disappoint.

So, now I’m back at the hotel. Tired, but satiated. A gorgeous day, lots of podcasts, plenty of time to think. I suspect this was the most walking I’ve done in one day since the Camino. On the plus side, not having to carry a full backpack or traverse mountains made it a lot easier. On the downside, infrequent espressos and a lack of other pilgrims made it a bit less fun. Tomorrow brings rain, so I’ll switch to indoor historical site mode. And perhaps eat a bit less.

As a child, I was fortunate enough to get to experience a fair amount of travel. On occasion, this included travel to parts of the country or nearby islands with distinctive accents. On these trips, my father had (and I suspect, still has) the habit of immediately adopting the local accent.

While I never elevated embarrassment of my parents to the true artform my sister achieved, I still recall this being relatively embarrassing.

So, why in the bloody hell do I do it?

Right then, Charleston. Y’all. It’s a very small place. Bounded by rivers, ocean, and highway, you can’t get lost. So, step one for me, as it usually is, was to set out on a long walk. A lap of the downtown.

Prior to arriving, I hadn’t quite realized the degree to which Charleston proper exists almost purely as a tourist destination. Between cruise ships docking and regional residents doing a weekend away, it seems designed to deliver a charming southern experience. This isn’t a complaint per-se – I don’t think the charm is papier-mâché applied to Chinese sheetrock like at Disney. But nearly all the restaurants are higher end, designed places – the sorts of restaurants with “investors” rather than “owners” – and the stores are more shoppe, less shop. In addition to the tourist crowds, you’ve got folks from the citadel (and their companions) roaming around. It doesn’t have the feel of a city that makes things. It makes itself available for consumption.

After a lengthy strolled, I grabbed dinner at Poogan’s Porch – buttermilk fried chicken, collard greens and a really fantastic spinach salad. Had a nice chat with the bartender about ingredient sourcing – they’re almost entirely local, as are seemingly most good places here. Must be nice to have the climate to support that.

Then, it was time for the Ghost & Pirate tour. In the leadup to this tour, I’ve been making known my hope that the tour would drop the ampersand and instead deliver stories of Ghost Pirates. And, to an extent, it did. Lead around downtown by a pirate-dressed guide, we heard real stories about the history of Charleston and its on-again off-again relationship with the neighborhood pirates. We also got stories of some of the ghosts which inhabit the city – at least one of which was a legitimate pirate.

A great chance to start to get a sense of the city and the history.

Tomorrow, a long walk for some Gullah cuisine, a lighthouse, and some big boats. 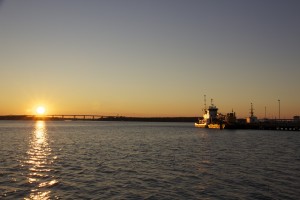 I do not have a high opinion of the south.

But I’ve never really been there either.

Time to change that. I’m currently enroute to Charleston, South Carolina for a few days.

Aside from some walking, I have a pretty limited set of agenda items for my visit. The only “site” I’m planning to hit is Fort Sumpter – I’m primarily just looking forward to wandering the streets of a city with a rich history, enjoying some southern food, and getting a sense of the place.

Some would argue that calling Charleston “the south” is like calling Austin “Texas” but it seems like a nice, gentle introduction. If it goes well, perhaps I can work my way up to Montgomery.