What follows is an aborted attempt at a different tone of writing. Not particularly happy with how it came out, but since it contains some information that might be useful to those trawling google for via ferrata information, I figured I’d throw it here.

This landscape reflects millennia of conflict, from invading barbarians to Prussian armies. One way in which the scars of this landscape can be experienced firsthand is with a journey on the iron road – the via ferrata.

The via ferrata dates to World War I. The Italians were engaged in brutal conflict with the Austrians, and much of the conflict happened in the Dolomite mountains. The Dolomites are particularly harsh and jagged peaks, and the terrain and weather took a massive toll on the Italian forces.

Attempting to mitigate the dangers, the Italians began digging extensive networks of tunnels, rigging ladders, and attaching fixed cables along narrow ledges. Soldiers wore primitive harnesses, allowing them to anchor themselves to these cables.

After the war, the via ferrata was briefly forgotten. However, the Italian Alpine Club (CAI) embraced them in the 1930s and began expanding and enhancing the network. Today, the via ferrata plays host to a new type of invading Germanic hoard – tourists.

The window of opportunity for experiencing the via ferrata is relatively narrow. Until late June, the weather in the mountains makes them impassable. August brings the inevitable crush of Italian tourists on holiday, and by late September the weather begins to close in again. My trek on the via ferrata took place in July, beginning in Campiglio di Madonna, a sleepy ski village in a valley of the Brenta range at the southern end of the Dolomites.

A typical set of via ferrata equipment involves a helmet, a harness (the type you’d use for traditional rock climbing) and a special energy-absorbing anchor. This involves two cables, each with a carabiner at the end, allowing you to always maintain one point of attachment to the via ferrata cabling. A fall when climbing a ladder or other vertical ascent on the via ferrata can easily involve a 10 or 15 foot drop. The harness sacrifices itself to keep you alive. It’s a single-fall piece of equipment.

After procuring equipment from a local outfitter, you begin your journey into the mountains. The pastoral, “Sound of Music” landscapes quickly give way to bleak moonscapes as you climb towards the 10,000 foot summits. 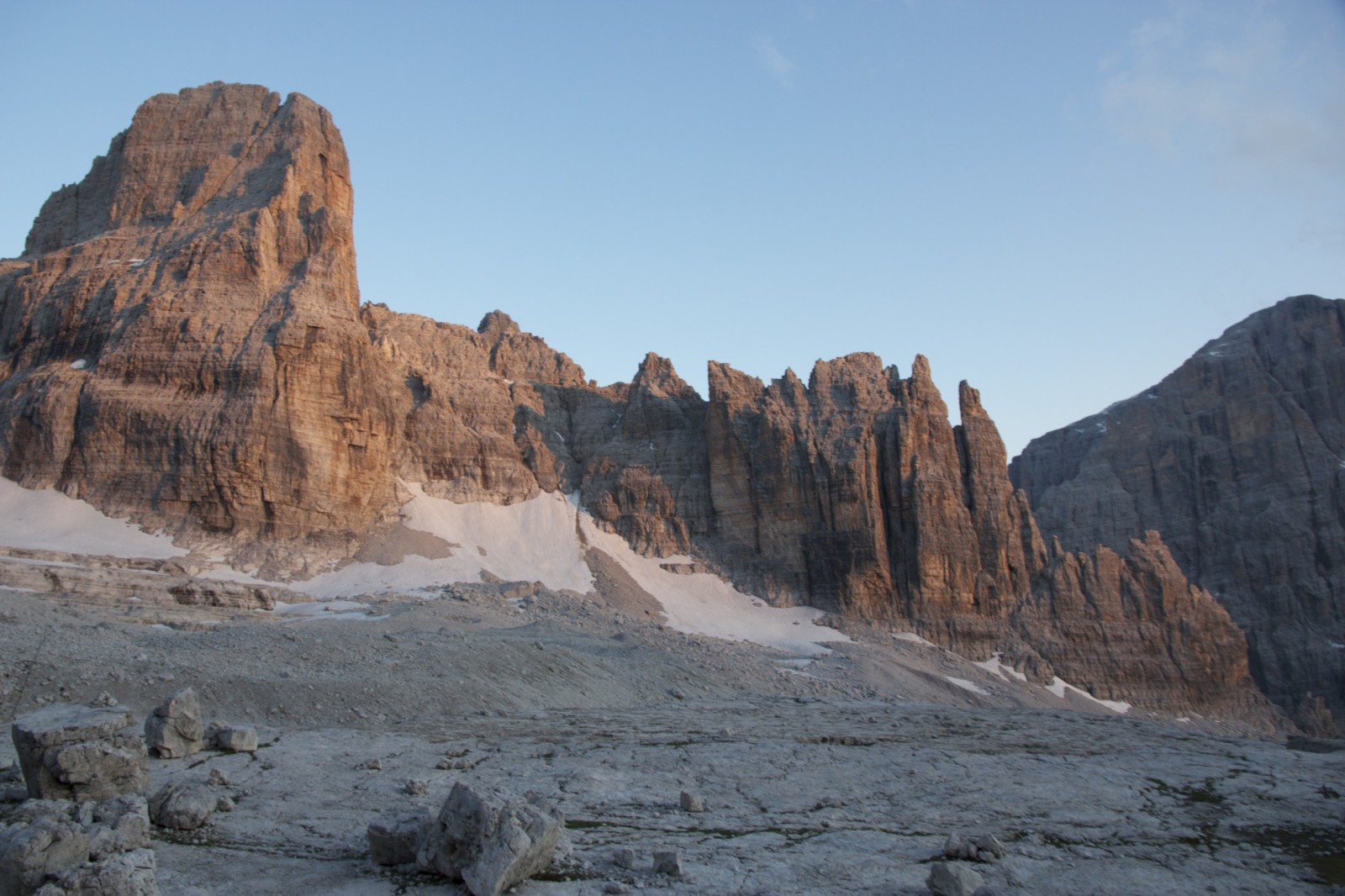 Each segment of the via ferrata begins with an ascent – the routes generally run along the very peaks of the mountains. This initial ascent often involves a substantial climb on a series of iron ladders. This is, perhaps, the most terrifying portion of the experience. Often wet, always cold, disfigured by shifting ice, you cling to the narrow round rungs and climb a few feet, then adjust your clips. Repeat, over and over again, for hundreds of feet. A slip on a ladder probably won’t kill you, but it will destroy your harness and leave you feeling rather sore.

After the initial ascent, paths follow the mountain ridges, with scrambles up or down a boulder, wash, or gully. The occasional traverse of a glacier or snow wash will involve a rope and a series of very careful, deliberate foot placements.

Via ferrata provides perhaps the ideal blend of backcountry trekking with vacation living. During the day, you exert yourself on intense hikes and climbs. At night, you settle in by a wood stove in a mountain refuge and enjoy a hearty meal. Supplied by a network of cable lifts, these refuges provide a safe place to ride out a storm, a chance to meet other travelers, and even (occasionally) a shower. 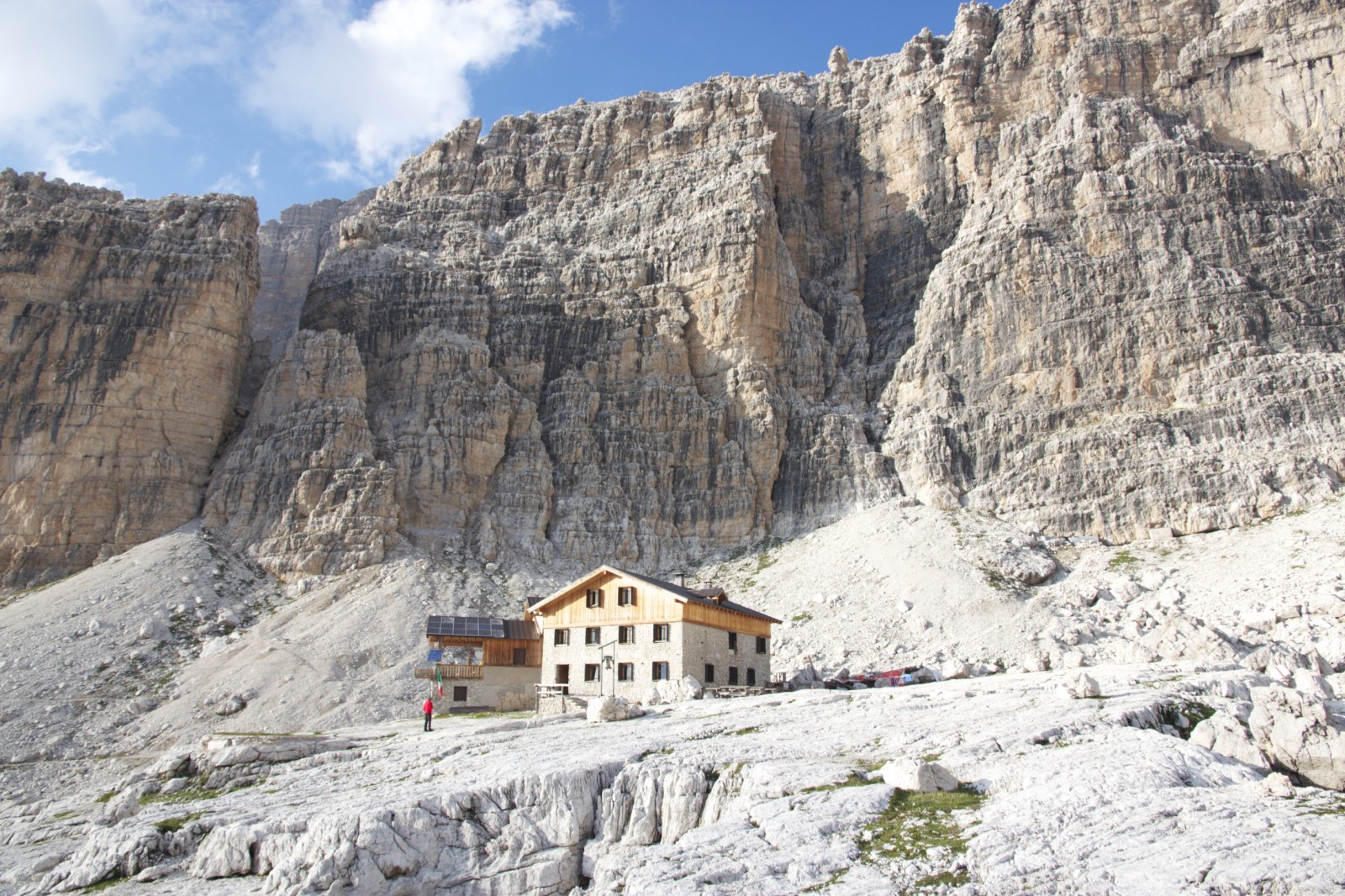 The travelers you meet on the via ferrata are a mixed bunch. For many, via ferrata is a guided day trip, part of a larger excursion in the region. For others, it’s a long term escape. Groups generally keep to themselves. Because the refuges sit on a spider web of via ferrata routes and some more traditional trails, parties depart in all directions. There’s not the “all in it together” camaraderie that comes with a fixed destination hike.

For the first few hours or days on the via ferrata, one takes safety very seriously. The only time you have less than two anchors on the cables is when you’re moving past a bolt. A hand is kept firmly on the cable at all times. A helmet is worn diligently. 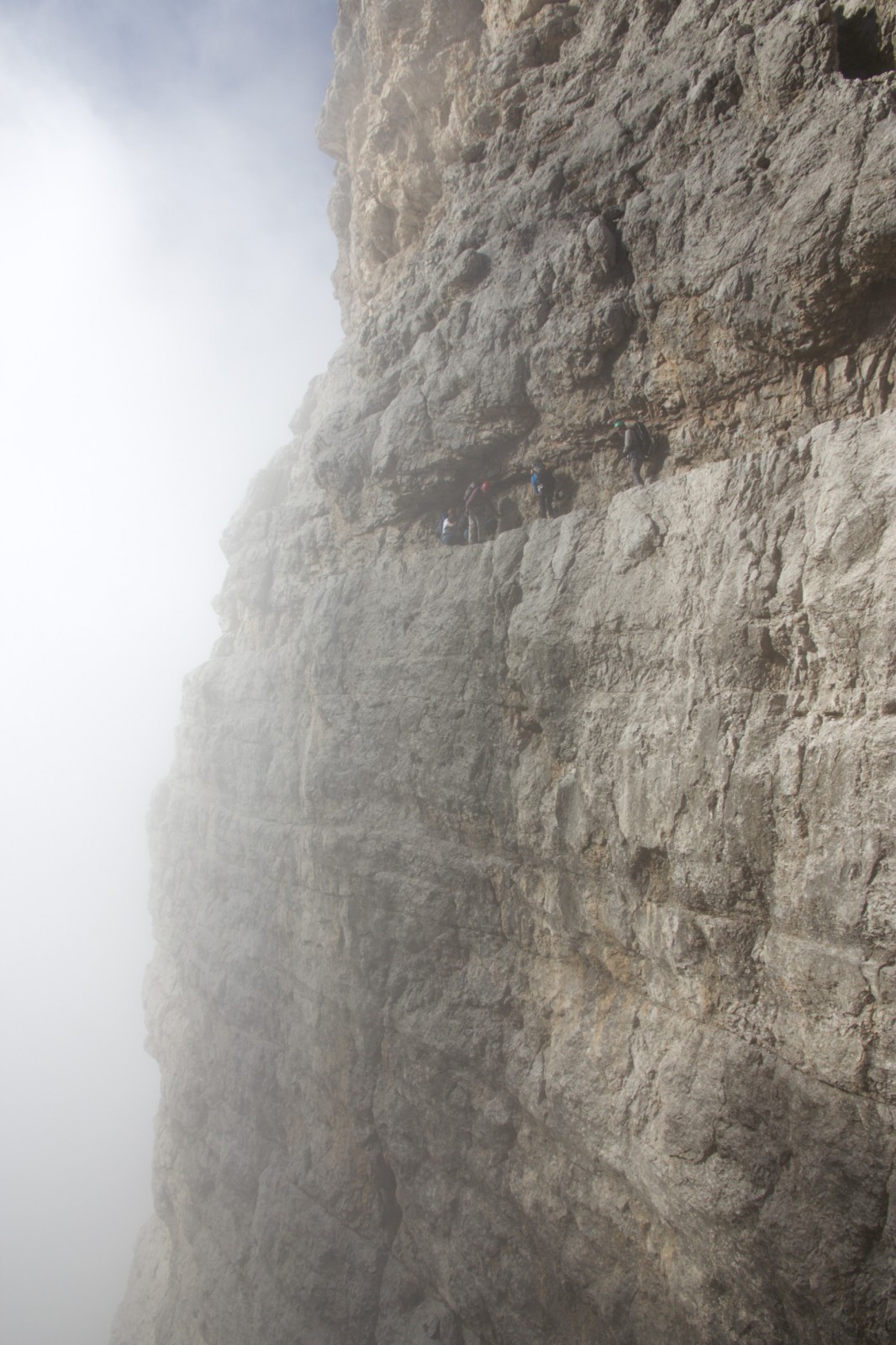 Eventually, you start to think that perhaps having both cables attached at all times is overkill. Then you start thinking that the helmet seems a bit silly. And eventually, you convince yourself that just keeping a hand on the cable is enough. And then there’s a little slip. A rock gives way. A slippery ladder proves to be a bit more slippery than you expected. And then it’s back to two anchors at all times. For a while. 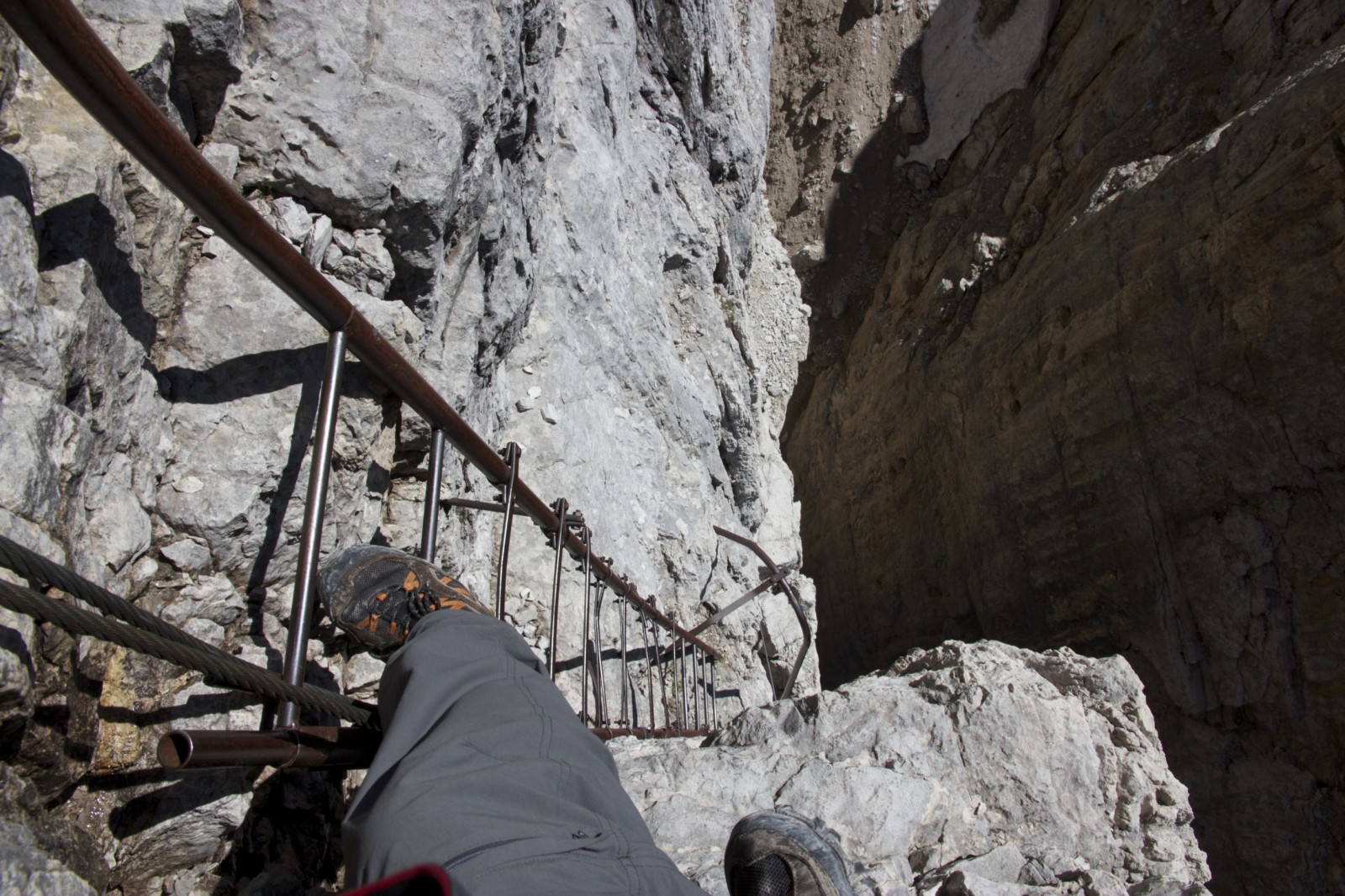 For me, via ferrata was not a transformative experience. I did not descend from the mountains thinking I had conquered them, accomplished something great, or discovered my true self. There was not the same sense of jubilation one feels when reaching the end of the Camino de Santiago, or ascending an intense multipitch climb. Instead, it was a feeling of thankful respect. Thankful that such a place exists. Thankful that liability limitations have not prevented folks from showing up with a backpack and some gear and going for a wander. Thankful that some glorious sites are still restricted to those who are willing to work a little bit for the payoff.