This evening, I took the Foodie tour from XO Tours. The gist is that a group of folks travels the city on the back of mopeds, each driven by a woman in traditional dress, stopping to eat the street food that you don’t normally eat as a tourist. So, no pho or spring rolls here. This was an absolute blast, and well worth it if you’re headed to HCMC.

There were thirteen participants in my tour – primarily a group of Americans from Kansas City, traveling together. In addition, a pair of New Yorkers, a pair of Malaysians, and me. We all met up at a back alley place to get oriented and have some Bun Bo Hue. I’d actually had this one before, and it’s one of my favorites. This version was even better. 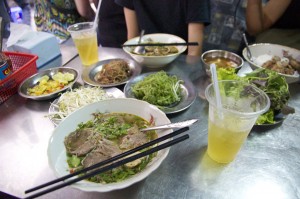 The leader of the group, Tay, gave us a rundown of what we’d be seeing, and kept everything very fun and lighthearted. Part of the fun of the tour was that it doesn’t take itself, or “tradition,” too seriously.

HCMC is a very spread out place, and many tourists never leave district 1. One of the attractive things about the tour is that it takes you to all the outlying districts that are difficult to reach without your own means of transport.

Our first stop as a group was in Chinatown. I’d noticed the strong Chinese influences in HCMC, but was surprised to learn that there are over half a million Chinese living in the city – the HCMC Chinatown is one of the largest in the world. We didn’t eat at this stop, just got a chance to see this district and get a feel for it.

Part of the fun of the tour is that the driver can point things out and give you a brief history lesson as you ride. Not just the big dates and places, but little neighborhood trivia. For example, we drove down a street that straddles two police jurisdictions. Illegal clothing vendors setup on one side of the street, and if the police come, they push all their merchandise to the other side of the street. If they time things wrong, folks hanging out in the area get free clothes.

The next stop was in a district (I’ve already gotten confused about which are which) which has a strong emphasis on goat meat. So, we started with some grilled goat meat, then moved on to grilled squid, grilled prawn, and grilled frog. 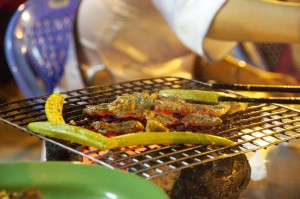 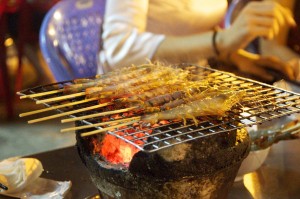 Onward from there, we drove past a semi-sanctioned “hookup spot” – because most Vietnamese households are multigenerational, privacy is hard to come by. So, along the river, there’s a long stretch of lawnchairs with umbrellas, behind a row of bushes. Like “make out point” done at scale. 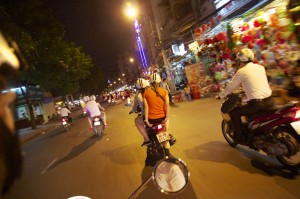 Our next stop was district 7. District 7 is less than 20 years old and is filled with western chains and high end retail. We got an explanation of the Vietnamese property bubble – lots of fancy condo buildings, fully sold, with all their lights off (because nobody actually lives in them). Interestingly, because the Vietnamese eschew credit, everyone pays cash for these things – a hedge against inflation (which has been averaging 10% per year, and has recently been as high as 20%). 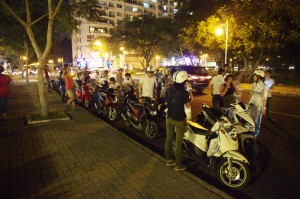 From there, we went to district four, which is considered a rough-and-tumble area – the sort of place a tourist shouldn’t wander alone.

This food stop was mostly seafood – crab, scallops, and oysters. And then there was Balut – duck fetus eggs. 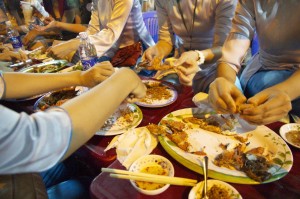 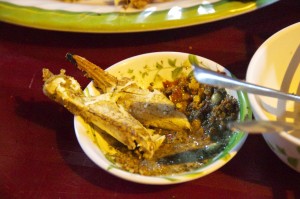 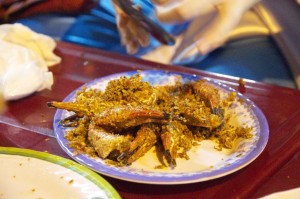 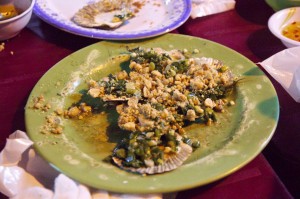 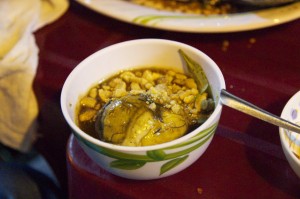 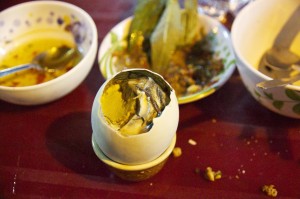 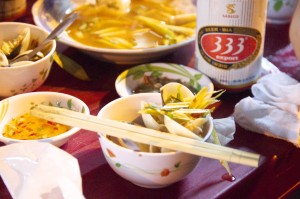 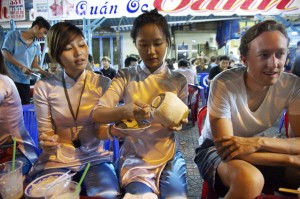 In truth, the balut weren’t bad, they just weren’t amazing. Think hard boiled egg with some feathers and bones.

The final dishes were a few desserts – a strange coconut gelatin item, and a variety on a tiramisu.

As I said at the beginning, this was a great way to get to know the city and some food that I wouldn’t have tried otherwise. The guides were all fantastic, the participants were great and I had a tot