Yesterday, my body (or a helpful bacteria) called timeout and asked me to stay in bed (or the bathroom). So, no big news there. Misery, a flight to Ho Chi Minh City, and more misery. All better now though!

I’ve only spent one day wandering HCMC, but at this point I’m feeling pretty good about my decision to weight my trip towards Hanoi. Ho Chi Minh City is a young city – whereas Hanoi just celebrated its 1000th anniversary, HCMC is only around 300 years old. Big chunks of the city are less than 20 years old. And, obviously wars have taken their toll. The result is that it feels like a young, modern city – perhaps Chicago is the closest American parallel? Just a little bland.

I got my bearings, as I always do, with a walk. A stop by the big market (nothing of note) and then onward to the War Remnants Museum. This museum is primarily focused on American involvement in Vietnam – lots of our military hardware outside, lots of our atrocities inside. Far, far more powerful than the museums in the north. Instead of hitting you over the head with placards about the American Imperialists, they simply show photographs, many from American news magazines (Life, etc). 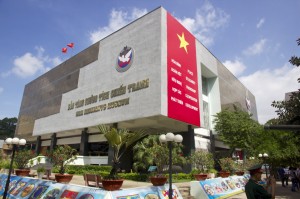 This museum kinda kicked my ass. And, judging by the distant empty looks on the faces of other Americans (including some vets) I don’t think I’m the only one. The exhibit on the aftermath of agent orange filled me pure, unadulterated rage. A powerful place. Sorry.

Anyways… Next up was the Lunch Lady. I first learned about the lunch lady, as most people did, from Anthony Bourdain. But I’d forgotten about her, until the South Africans mentioned her during my cooking class last week. They said she was legit. They weren’t kidding. 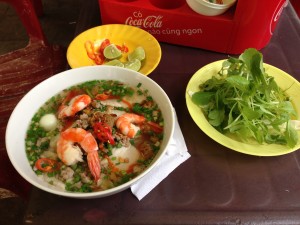 Definitely a cut above other street food. Worth the walk.

From there, I swung by the Jade Emperor Pagoda which was rather unremarkable, aside from a pretty epic turtle pond. 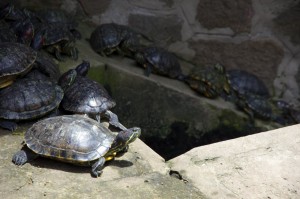 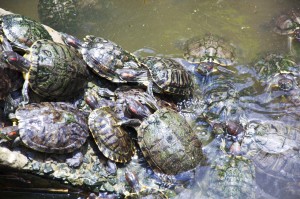 The final stop of the day was for another book, as I finished The Things They Carried earlier today. This time I went for The Innocents Abroad – seems appropriate.

The rest of the day was my foodie tour of the city, which I’m going to writeup in a separate post. Day one of HCMC – certainly not unpleasant, but the city hasn’t sucked me in like Hanoi. Tomorrow, a trip the Mekong delta.