Sunday – our last full day in Italy. We got up early and (after a couple espressos and a pastry of course) caught the bus up to Settignano. Well, that’s what we intended at least. Turns out the number 10 bus to Settignano doesn’t run from San Marco on Sundays. Fortunately, ATAF has a decent mobile site and we were able to find a set of transfers to get us from San Marco up to Settignano.

From Settignano, we set out for Fiesole. We managed to completely miss the trail out of town, following the road for longer than we needed. Really not sure how we managed that. We did find the trail eventually, and enjoyed some glorious sunshine on our hike. 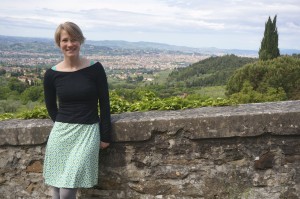 Although it’s still relatively early in the growing season, there were plenty of flowers and plants to admire. 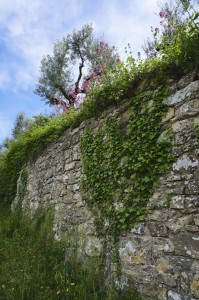 Upon reaching Fiesole, we went directly to the Etruscan/Roman ruins. We’re both suckers for any chance to get to touch or climb on ancient sites. 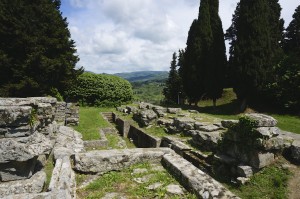 We had a delightful lunch in town at a place recommended by the guide from our Vespa tour, and then wandered the antiques fair (the notional reason for being in Fiesole). It was a bit underwhelming, so we climbed the hill to the church to enjoy the views, and the sun.

Finally, we paid (really paid) for the privilege of a coffee overlooking the valley. We had a banana split. It was very sunny. We were very happy. Slightly sunburnt, but very happy.

I would be so bold as to call it a rather enjoyable trip.

After the Fiat 500 tour, we hopped a train to Lucca for a quick overnight.

We stayed at Guest Apartment Margherita and can’t say enough things about how wonderful our hosts were. Because it’d been raining, Roberto met us at the train to drive us the half kilometer into town. The B&B is gorgeous and we felt so incredibly welcomed.

We arrived in Lucca with no real plans, so we set out for a brief wander. I’d done a bit of restaurant research (on tripadvisor.it of course) and had one place in mind.

When we arrived at Osteria da Rosolo, sans reservations, we were informed that there were no tables to be had. We wore our best sad faces. Our host responded with “… but maybe you wait a few minutes?”

A few minutes later, he’d found a spot for us, and we were treated to our best meal of the trip. The place is a family affair, with seasonal food and a great atmosphere. Gnocchi with arugala pesto and walnuts, ravioli with spinach and walnut cream sauce, lamb, porchini. Fantastic! 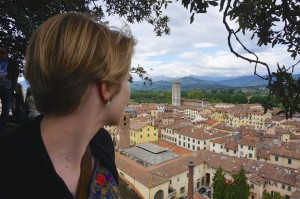 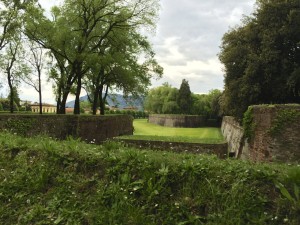 Saturday (today, hey look, I’m finally caught up!) we spent the day wandering Lucca, poking in shops, and doing not much of anything. Kat really loved the town – it’s a nice break from Florence.

Oh also, there were these donut-like things covered in homemade nutella, fried fresh to order. 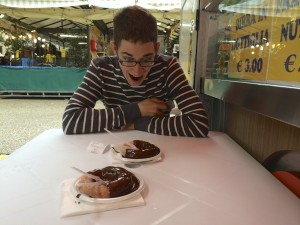 In the evening we caught a train back to Florence, made some dinner, and .. caught up on blogging. I think I just went recursive.

Friday was Fiat 500 day. After a quick run to Sant’Ambrogio market, we caught a taxi to Galluzzo for our Fiat 500 Tour. 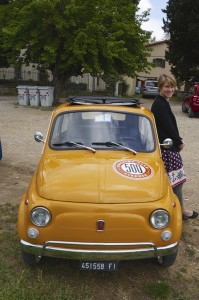 After a quick lesson in double clutching (no syncros – like my Alfa, except my Alfa had them originally and they’d just forgotten to be synchronizers over time) we set off. Since the cars can cover more ground than the Vespas, and we started further south, we got to see a different and more rural side of Tuscany. 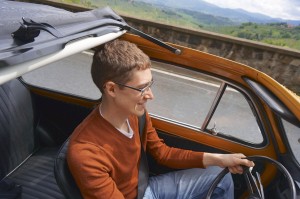 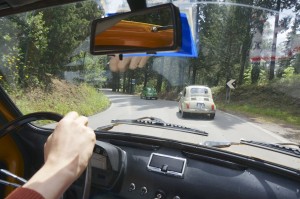 Our 1963 Fiat 500, Giacamo, resplendent in Orange, was a real beast. Rated at 22 horsepower (though that seemed optimistic) with brakes that were notionally attached to the brake pedal, the driving experience was very Italian. Building and maintaining momentum becomes very important. Thankfully things have moved on a bit when it comes to my Abarth back home. 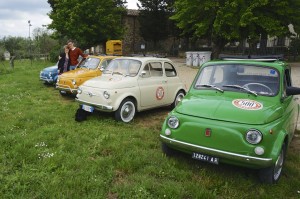 After a couple hours driving, we ended up back in Galluzzo for a wine tasting at a beautiful Villa. Roberto, our guide, is incredibly passionate and excited, in a way only Italians can really be. We learned a lot, got to chat with more interesting people from around the world, and left with big smiles.

First thing Thursday, we met up with friends at the Mostra Internazionale dell’Artigianato. Think massive art fair – 10 buildings, hundreds of vendors. Everything from flower pots made out of recycled soda bottles to fine jewelry and clothing. Plus food! And dogs! We were on a tight schedule, so only got to stay for a couple hours, but it was really fun.

We were on a tight schedule because Thursday was Vespa day! We did the Vespa tour with Walkabout Florence. After a short lesson, Stefano took us out into the Tuscan hills around Florence. There were four of us in the group, on three Vespas (Kat and I had our own), following Stefano in his Fiat 500. It was a total blast – going down tiny roads, through little villages, and seeing the amazing scenery of Tuscany. 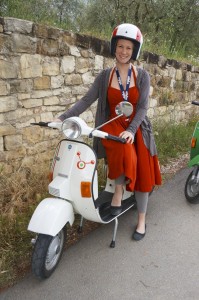 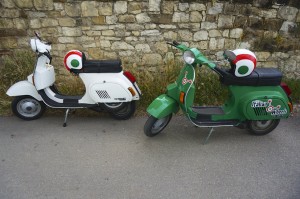 At the end, we got a chance to chat with the other couple (a Dutch guy and a Malaysian born, residing-in-Brunei-but-dating-said-Dutch-Guy woman on a quick Italian road trip) over some cheese and meat at a nice little restaurant. 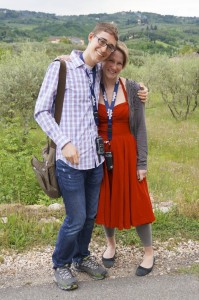 You know, the Renaissance.

Wednesday night was White Night (Notte Bianca), a city-wide, all night party (conveniently taking place the night before Labor Day, so there’s no need to worry about getting up the next morning). 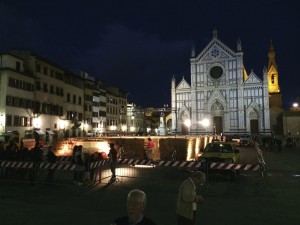 White night ostensibly gets started around 7:30, but aside from exploring the straw-maze at Santa Croce, things seemed pretty quiet. We detoured to Trattoria Acquacotta for some delicious food (pancetta wrapped scallops, mmm). Kat made the questionable decision to try Arancino. Think limoncello, but made with orange flavoring and death. To her credit (?) she finished the whole glass, grimacing with each sip. 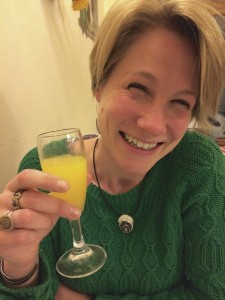 So, white night then! It was pretty crazy – the whole town was out, there was stuff going on everywhere – in the museums, in the squares, in private galleries. We packed it in around 1am, but the party went all night. 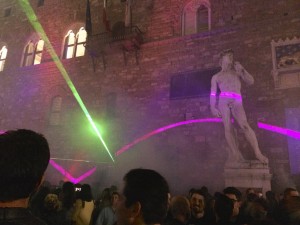 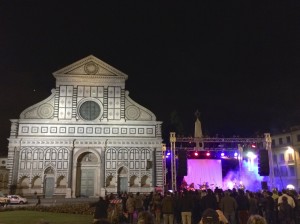 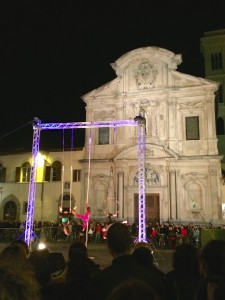 The European Union has, at least from the perspective of this American tourist, been a rather beneficial development. When you ask an Italian craftsman though, you get a very different perspective.

Wednesday was our jewelry tour. This was my birthday present to Kat, and I was nervous. Booking a tour is always a bit of a risk – you may end up being shown to a “ye olde workshop” where they just tell you about all the special things you can purchase. I was pretty sure that wasn’t going to be the case here, but one never knows.

Fortunately, Context Travel came through in a big way. Our tour, lead by Luca, took us to three different artisans. The tour was technically their “Oltrarno Artisan” tour, but I’d told them Kat was a jeweler, so Luca arranged some special visits for us.

First, we went to a very traditional workshop, consisting of a husband, his wife, and their friend. They do cast pieces, silver and gold plated, as well as enameled pieces and engraved pieces. Much of it is done on site – one of the few workshops left in the town proper doing that kind of work. The basement is full of very large, very old machines, and the process is very manual. But they make high end pieces of all the big names in design and fashion – picture frames, jewelry boxes, custom confetti boxes for fancy New York weddings (yes, really). 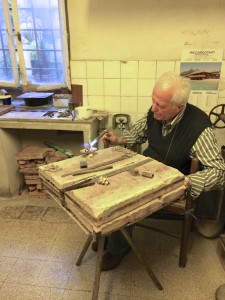 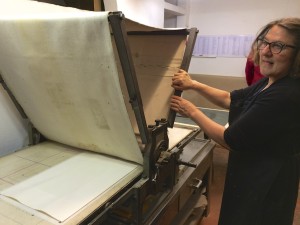 Here, in addition to learning about the process (very similar to what happens in our own basement), we learned about the realities of being a 21st Italian artisan. The paperwork involved with having a propane torch, for example, sounds nearly ruinous. The euro has similarly (in their opinion) put downward pressure on their pricing and pushed up the cost of imported materials (this one I question). Regardless, it had an “end of an era” feeling.

From there, Luca took us to an engraver – he makes engraved copper plates which are then used to make prints. It was another husband and wife duo, making beautiful and meticulous pieces. The process itself is nearly identical to the process Kat uses for her etched jewelry.

Finally, Luca took us to a young jeweler’s workshop. She is the recipient of a scholarship from Context Tours, and has just opened her own studio. Now that she’s proven her skills at the traditional techniques, she’s creating beautiful, complicated, modern pieces. It was fun to be a bystander as she and Kat discussed tools and techniques.

Since we were already in the Oltrarno, we had lunch in the Santo Spirito square. Truly one of my favorite meals so far – risotto with zucchini, prosciutto and melone, artichoke salad.

On the way home, we swung by the Uffizi (when you say it casually, it’s even more delightful). We’d picked up last minute reserved tickets on Tuesday (waiting in the Uffizi line being one of the most unfortunate ways to spend a vacation). Since we’ve both been to the museum a few times, we decided to just focus on the works highlighted in the Rick Steves guide tour, which tells you the story of the origins of the Renaissance. It was enjoyable to have a focused tour – not feeling guilty for skipping a lot of amazing art, but rather focusing on one narrative.

We were both pretty well shot after the Uffizi, so it was time for a break in the apartment before the real party.

Right then, where were we? I’m realizing that, given the long and travel-rich future in store for Kat and me, I may need to develop some different blogging habits. Traveling alone, days end relatively early, giving plenty of time for blogging. Traveling with another, dinners last longer, night-time strolls are a bit more leisurely, and the blogging gets postponed! (for the record, I’ll take traveling with another)

San Marco! Perhaps my favorite place in Florence, and a new experience for Kat. The key to enjoying San Marco is to get there early in the morning, before the tour busses arrive. Then you’re guaranteed to have at least a few of the rooms to yourself. San Marco is a monastery complex. The core of the site is the cloisters. Fra’Angelico painted a single fresco in each, for the monks to reflect on and study in solitude. It’s a space that is immediately calming and reflective, away from the noise of the city and timeless.

If you’re going to Florence, San Marco is a must-visit site as far as I’m concerned.

From San Marco, we went to the Duomo – specifically, the basement of the duomo. It was another “you have to see this!” site (as in, me exclaiming to Kat), because I think it gives you a great sense of the history of the city – the old church under the new church, the proto-Christian church under that, and the Roman mosaics under that.

On this trip, we’ve been enjoying the free Rick Steves audio tours available through his iPhone app. We made use of one while checking out Orsanmichele, a church with a fascinating history and many easy-to-miss features. Plus, we’re Rick Steves fanboys…

Finally on Tuesday, we hit the Bargello. In this case, I played tour guide and read the Rick Steves printed guide in my best tour group voice. It was sad that we couldn’t see Donatello’s wooden Mary Magdalene on Monday, but at least we could see his bronze David – a far cry from Michelangelo’s.

Tuesday ended with a wonderful dinner with friends, which thankfully happened in spite of my Italian-esq logistical confusion. It was inspirational.