Saturday morning, we woke up to the possibility of birding, but the wind was very strong. Instead we enjoyed a leisurely breakfast at Casa Batsu and laid in the hammocks for a few hours. 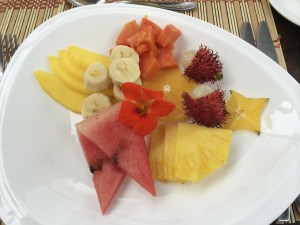 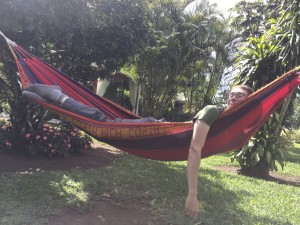 Eventually it was time to check out. Janelle and Natalia picked us up and took us into town. We went to the farmers market, just wrapping up, for a few supplies. Then, Janelle and Natalia left and we had an indirect walk back to the house. By way of food. All the food. We wandered out of town a bit and found a new bakery which had a delicious corn spiral thing. Next, we found a tiny toy store for some gifts for the kids.

Then we went to a food trailer and had a taco of the house. Which meant a chicken taco, fried, then covered in cabbage, mayo and ketchup. We had different opinions about the overall delightfulness of this food. Luckily, an amazing chocolate banana milkshake was procured shortly, and pre-marital bliss was restored. Then, another shredded chicken corn thing (Mmm) and a stroll back to the house by way of some more souvenirs.

By early afternoon, it was time to head for San Jose. First stop was a visit to a local jeweler, Marie, tucked up near Curi Cancha. She’s French Canadian and makes very cool pieces in her little cabin. She was in the process of setting some Australian opals in some beautiful silver settings (up to $2000). Natalia had given janelle some small opals and they were planning for some earrings, and Natalia was planning for a pendant of her own, using a stone They bought in the states. Like in Italy, it’s always fun to see familiar tools in an unfamiliar space, and to imagine the possibilities. 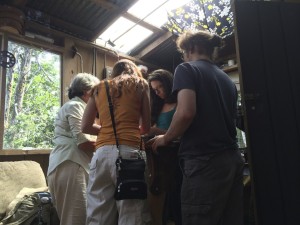 The drive to San Jose was very quiet, as the world cup game started right as we left. The views were glorious and the road was bouncy. We made it to San Jose just in time to see the shooting. Margarita, the hotel owner, is from the Netherlands, so she was ready to celebrate regardless. We enjoyed a celebratory glass of wine. Our rooms included loaner dogs and cats, always a bonus. 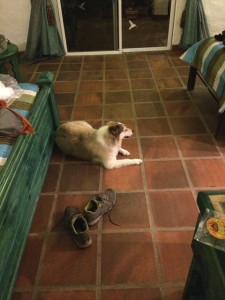 We went out for a basic pizza before heading to bed very early. At 3:30 we were up and headed to the the airport for the trip home, making it back safe and sound.