Today dawned with a simple mission in mind: pastries.

Err, pastries and history. I mean, mostly history. Barely any pastries at all.

We caught the tram to Belem, a historic suburb of Lisbon that wasn’t destroyed by the 1755 earthquake. Belem is home to the Mosteiro dos Jeronimos (a monastery), as well as the Belem Tower. It’s also home to the more recent Monument to the Discoveries.

But nevermind all of that, first we needed The Best Pastel De Nata in Lisbon, which is to be found in Belem, though not at the place that made the pastel de nata famous. Instead, it is (supposedly) a nondescript cafe down the street. While we have not (yet) sampled every pastel de nata in Lisbon, we can say these were mighty fine.

Suitably fueled (we may have gone back for a second round …) we visited the monastery and marveled at the dramatic architecture. The monastery was built (well, rebuilt) to celebrate Portugal’s newfound wealth and power in the Age of Discovery, and the themes of the discoveries are present throughout. The ceiling is an intricate web of carved stone ropes, and faces from all of the Portugese colonies pop out of the walls. Vasco de Gama’s tomb is there as well.

The cloister, next to the church, is a bright and beautiful space. We were lucky enough to stumble upon a play being put on for a bunch of students, using a really clever form of staging. The actors were standing on short step ladders, within the crowd, moving around and interacting with the viewers. Though it was in Portuguese, it was still very compelling. 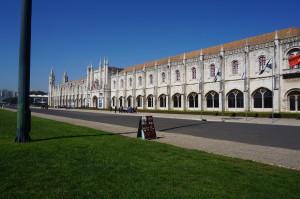 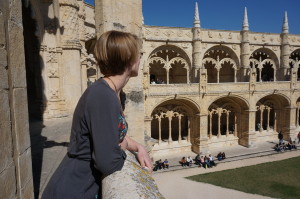 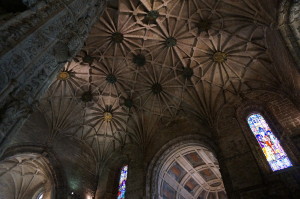 After the monastery, we wandered along the waterfront, taking in the Monument of the Discoveries and the Belem Tower. 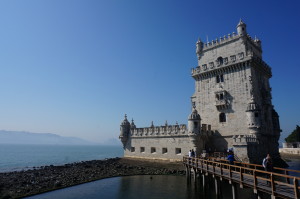 Having had enough Manueline architecture, we caught the tram back to Lisbon. We got off right in front of the Ribeira Market, which as of last year became the Time Out Market. While it still has a handful of traditional vendors selling fruits and vegetables, this place is mostly hipster central. The food was absolutely fantastic. Arranged around the hall, you’ll find small stands (many outposts of fancy restaurants in town) selling a handful of dishes. Kat had a pork cheek with creamed potatoes and cabbage, and Colin had a sandwich of the very-porky variety. The sandwich, it should be noted, was on a menu that also included “the yuppie” and “the punk.” This is a place we could happily return to many times. 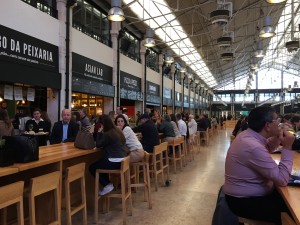 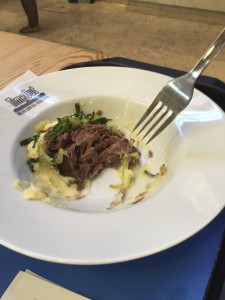 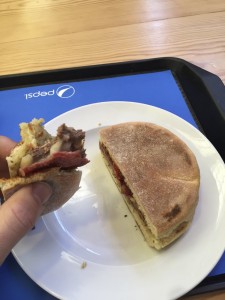 After lunch, it was time for our main course of history. We decided to do all three of Rick Steves’ walking tours of Lisbon, back to back. These took us through all of the historic neighborhoods of town – The Barrio Alto, the Baxia, and the Alfama. Rick’s tours keep you moving, and well snacked. Even though we’d been in some of these areas the last couple days, it was great to have the added coherence of the guidebook. It was winding and fascinating and was a nice way to wrap up our time in town.

For dinner, we had an amazing meal of Portuguese Tapas (are they still tapas when served by hipsters? when do they become ‘small plates’?) at a place right around the corner from our apartment. The conceit was that every item on the menu was smoked in some way. Hipsters win the day, and once again, the two of us ate very, very well for under $40.

Tomorrow it’s off to get lost (hopefully not too lost, just fun-lost) in the countryside! 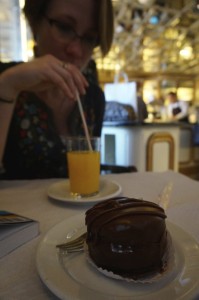 1 thought on “Going on a magical history tour”