Oh right. Well, we’ll get there.

This morning, we caught an Uber out to the airport to pick up our rental car. As an aside, how cool is the future? You tap a button on an iPhone app and a car shows up at your location, wherever you are. (aside: yes, Uber is a horrible company. But the concept, the concept is pretty magical)

Originally we’d booked a Renault Twingo. The man at the rental booth initially thought we should upgrade to a Clio. I asked if they had any Alfas, and we got to talking cars. He suggested maybe upgrading to a BMW 6-series cabrio because “It’s a diesel! It’s more economical!” … this man thinks like I do. In the end, we ended up with a more modest upgrade to a diesel BMW 2-series touring, an odd sort of wagon thing that isn’t sold in the states. It’s very nice, and Kat is a bit smitten. It randomly beeps. Do all BMWs do this? I feel like they do. 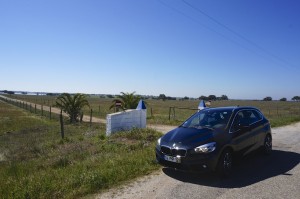 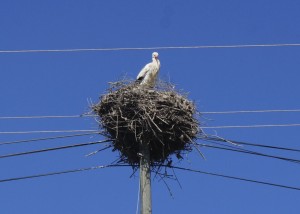 We set out from Lisbon with only one goal: leave Lisbon. Sufficiently Out Of Lisbon, we pulled over to come up with a plan. The end goal was Evora, and the mission was to avoid the motorways. We plotted a route on a paper map, then punched it into the iPhone GPS and got on our way. The route took us through the backroads of the Alentejo region. We saw storks nesting, gorgeous fields and olive groves, and plenty of cattle. Our lunch stop was at .. a town. We found a cafe, and communicated as best we could that we were looking for some food. (The nice old lady indicated that she spoke a little french, but that wasn’t of a ton of help) Success.

We hit the road again, and ended up at .. another town. This one with a castle. We went for a stroll. It was very quiet, and the castle was sadly closed. But the sun was warm and wonderful. 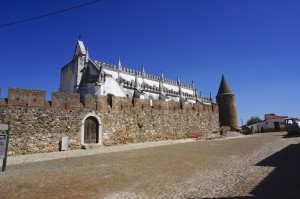 At this point, we were ready to head for Evora. Upon pulling up to the place that the iPhone indicated as our hotel, we had a moment of confusion. A nice man in a suit came out and began helping us. We don’t normally stay in places where nice men in suits come out to help you. Turns out, we’re staying at a very fancy converted monastery. It’s got gorgeous terraces and colonnades, a swimming pool, and endless corridors. 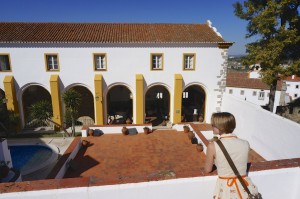 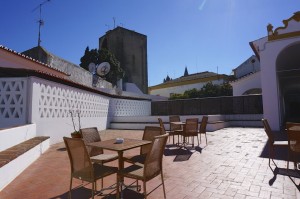 First stop after checking in was the Bone Chapel, built to remind us of our own mortality. Sufficiently mortalized, we followed Rick’s walking tour of Evora to get our bearings. Evora is very reminiscent of Lucca in Italy, for good reason. Both are ancient walled cities, with strong Roman roots, and plenty of remaining Roman, Medieval, and Renaissance architecture. 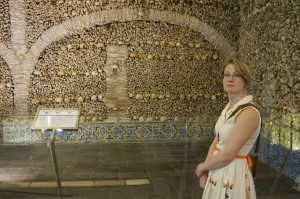 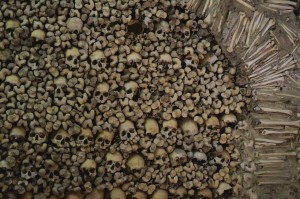 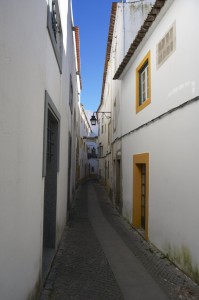 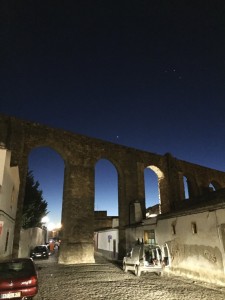 After the tour and a bit of a rest, it was time for dinner at Tipica Quarta-Feira. It’s a restaurant without a menu. It costs €25 per person and they’ll bring you what they want to bring you. It was fantastic. Perhaps the best meal of the trip. From the mushroom caps and roasted cheese to the Alentejo pork roast and dessert, we gorged on everything. The service was fantastic, and they filled Kat’s glass of Ginjinha more than a couple times. It’s a tiny place, and apparently a hit with the locals. A family was there celebrating a birthday, and after singing, the restaurant presented the child with a tiered tree of Kinder-suprise eggs. I was a bit jealous. 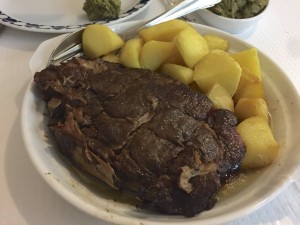 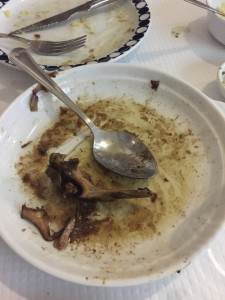 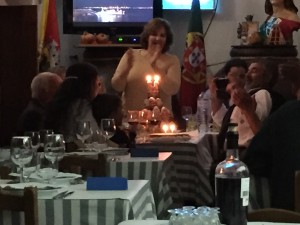 Now, we’re at home, suffering through the aftermath of our porkathon. So much pork.