The goals for today were manyfold. First: See the northern parts of Portugal. Next, eat delicious cheese.

Ok, so maybe the goals were more like twofold. In any case, we succeeded.

Based on a very thin thread of evidence, we picked as our goal the town of Celorico da Beira. We picked this town because a bit of Googling had hinted that it had a “cheese palace,” though what exactly a “cheese palace” is was less clear. We knew that the delicious soft sheep cheeses we’ve been eating this week came from the north part of the country, especially around the Serra da Estrela park. Celorico da Beira is right at the northern tip of this large national park.

Looking at the map, there was one particular road between Evora and Celorico da Beira that held a certain amount of “petrolhead” temptation. Think Northern Italy / Swiss Alps, but in Portugal and full of trees. 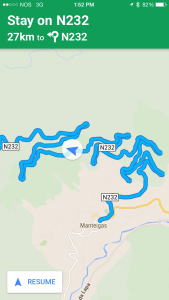 We started the day in the rolling hills of Alentejo, with its boulder-strewn fields filled with furry cattle and sheep. We watched the landscape transition to the more moutainous terrain of the north. The scenery was gorgeous, and Kat was often flustered that there wasn’t adequate shoulder to pull over and take pictures of the landscape. The drive was easy (aside from a brief kerfuffle while attempting to buy diesel) and we crisscrossed over “ribers” and fields as we wound our way north.

As we turned off the motorway and headed into the park, the scenery got even more dramatic, with vibrant colors and twists and turns. We saw what we think were cherry trees blossoming in the fields between rows of grape vines. The first half the drive in the park was a very well maintained (EU money) road, with new bridges and nice shoulders, though still plenty twisty. The halfway point of the park is marked by the town of Manteigas, where we stopped for a coffee. We think this town, and perhaps the whole area, sees ski tourism in the winter. 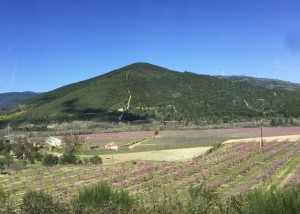 From Manteigas on, the road got more “rustic” and the turns got more dramatic. We climbed up above the tree line, with sweeping views and barren land. The crest of the mountains were covered in large granite boulders, slowly eroded by wind and water. Eventually, the road began to drop, and we exited the park, turning north for Celorico da Beira.

As we turned towards town, a large Castle loomed above the houses. Which, seemingly, isn’t all that uncommon in Portugal, as we had passed many towns with castles in varying states of decay. As we entered Celorico da Beira, we followed the signs for the “Solar do Quejio,” which, having the word for cheese in the name, seemed like a good bet for the cheese palace.

Eventually, the signs started pointing to streets that were increasingly un-BMW friendly (this is a small car, but not that small), so we parked the car and set out on foot. At the top of the hill, we found the Solar do Quejio. We don’t really know what it is – maybe something like a trade group for the local farmers? In any case, there was a small display about cheesemaking inside. Then we asked if there was anywhere we could sample the cheese, and were lead upstairs to the tasting room. It’s .. obviously the offseason. Everyone was a bit surprised to see us. In any case, the old man working there prepared us a plate of cheese and toasts, with a glass of wine and some water. It was delicious and unique. 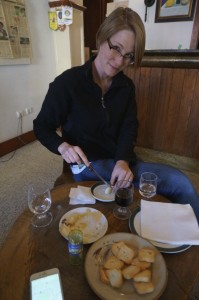 From there, it was on to the castle. We followed more signs, not expecting much. However, it was rennovated in 2007 in a serious way, and we were really blown away. Though legend says the castle is Roman, and there are signs of a Roman temple nearby, it was likely built after the invasion of the Moors in 711. It was rebuilt and rebuilt again over the ages, and the structure today was most recently modified in the early 20th century.

There were great interpretive signs scattered around (with English) and a stage for concerts. The community treats it as a meeting point and place of pride, and it shows. In the tower, we found a lone woman working behind a desk. She insisted that there wasn’t a fee to enter (despite signage to the contrary) and invited us to explore at will. On the second floor of the tower, there’s a small collection of documents and computers for research – again, part of making the site open to the community. On the roof of the tower, we got an impressive view of the valley below, along with a Not-In-The-USA approach to safety. 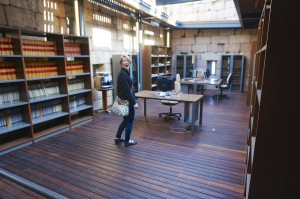 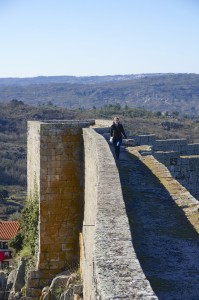 Revved up by the experience at the castle, we followed another of the magical “brown signs” (the ones pointing to historic sites) for a necropolis. After guessing a few times, we pulled down a dirt road and found the foundations of building that must have been excavated at least 10 years ago. Luckily, Colin was feeling adventurous and continued further uphill to a fascinating boulder delicately balanced on the hill above. Surrounding the boulder, and carved out of the bedrock, were dozens of coffin-shaped holes.

We don’t know a lot about this site – no signage here, and the details on the internet are sketchy. The best guesses are that it’s somewhere between 1st and 12th century, and contains as many as 40 burial sites. The foundations nearby turned out to be those of a church. The whole site is arranged around the precariously balanced boulders. You can imagine someone could arrive at this site and decide that it’s surely the work of a more powerful being. 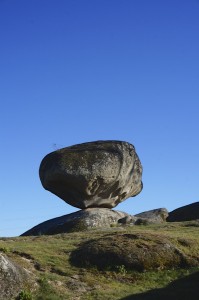 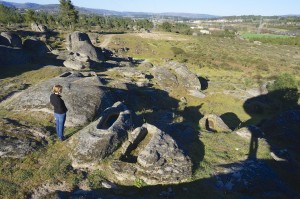 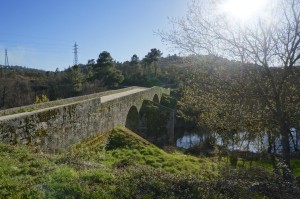 It was getting late in the day at this point, so we set the GPS for Coimbra and hit the road. The only notable thing along the drive was a large truck heavily laden with cork bark ready to be processed.

Our arrival in Coimbra included a unique experience. We followed signs for a city parking garage, and pulled in. The attendant (a nice old man) explained that it was €5 for 24 hours. I said we were staying until Sunday. He said that they were closed on Sundays. I got ready to back out, figuring we’d need to find somewhere else to work. He thought for a bit, and then told me to go ahead and pull inside (after paying my €5). Then he had me get out of the car. Thoroughly confused at this point, he explained that on Sunday it will be locked and gated, but showed me how to trigger the gate. Then he gave me a set of keys to the parking garage, so we can get in, and showed me where to hide them (under a dustpan) when we left. He showed us to our spot and sent us on our way.