After a late night of coughing (wooo! Wild-And-Crazy in Europe!!), we slept in a bit. Around ten, we met up with our guide for the day, Marta. The plan was to do a “gastronomy” tour in the morning, and a history tour in the afternoon. Of course, since we’re in Europe, even food has history.

Our meeting point was a medieval house just a few steps from our hotel. It’s one of the oldest houses in Coimbra, and makes it clear that people used to be a lot shorter. It’s not a trick of the camera – the whole house is just a little disjointed. 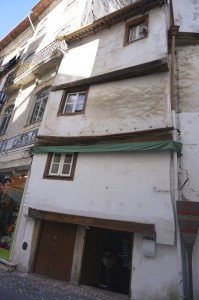 The first stop was a pastry shop near the hotel, where we learned about how each monastery developed its own variety of pastry. Basically, monasteries were using lots and lots of egg whites to starch their laundry, and started creating uses for egg yolks. Therefore, you’ve got many types of pastries that are variations on combinations of egg yolks, sugar, and (sometimes) almonds. Over time, the varieties spread beyond the original monastery, though many retained a name that harkens back to the creators.

Next, we visited a pharmacy for cough medicine. The pharmacy was celebrating its 200th anniversary. You know, like the CVS down the street. 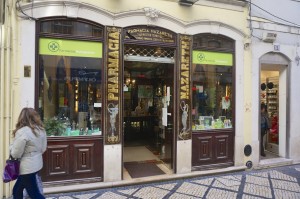 We strolled the streets of Coimbra, with Marta pointing out a lot of things we never would have noticed – for example, the markers in the ground denoting the path of the Camino Portuguese, which ends at Santiago de Compostello, just like the Camino Frances (click back to 2011 on this blog for more details on that). One fun section shows where the Camino crosses paths with the pilgrimage to Fatima. One group of pilgrims is heading north towards Santiago, the other is heading south to Fatima. They meet in a small square in Coimbra, and presumably, exchange high-fives. 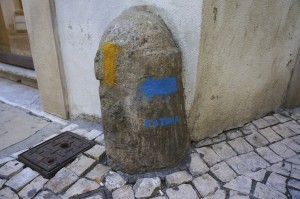 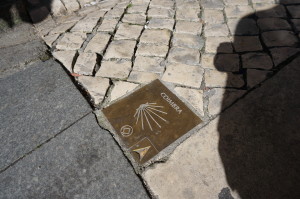 We learned about the suckling pig dishes that are popular in Coimbra, as well as boiled goat in red wine and a lot of other tasty items we hadn’t yet tried. Marta was a fount of information, with answers to all our questions.

One of the coolest stops was the Cafe de Santa Cruz. After the King closed all the monasteries in the 19th century, there were a lot of empty monasteries lying around. This one got turned into a coffee shop. The bathrooms are in the old confessionals. Symbolism. 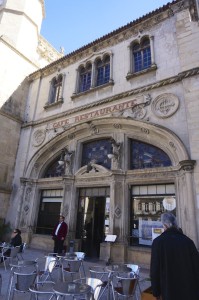 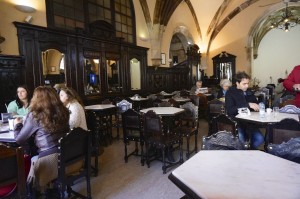 We walked up the hill to the market, which is a newly renovated building (European Union!). We got to sample some of the local bread which is based on corn rather than wheat (since they don’t grow wheat in the north), and marvel at the volume of fruits and vegetables that are in season. One thing we learned is that they have a lot of rice in the north of the country, due to the nature of the river system. We’d seen a lot of rice on menus, but assumed it was an artifact of the Age of Discovery trading.

The food tour ended with a tapas-style lunch. One of the interesting items in the lunch was a chicken sausage, which was invented so that the Jews could eat sausage with the Christians (or pretend to be Christians, depending on the situation).

We had a short break between tours, which we used to shop for some gifts. Then we met back up with Marta for the history part of the tour.

We walked around the city along the path of the wall, learning about the different types of cobblestones and the evolution of the city. We stopped inside the Santa Cruz church, which has an amazing organ – it basically had trumpets sticking out of it, that make a charmingly amusing noise. We were lucky to hear it being played. The church has the tomb of the first King of Portugal as well.

From the “downtown,” we climbed up to the stop of the city, where the University sits. We visited the Botanical Gardens, which was originally established to grow plants for the pharmacy students. It grew during the Age of Discovery, and now houses plants from throughout the empire. It also has a really cool aerial jungle gym of zippiness and ladders and swings. We were very jealous of the children who were getting to play. 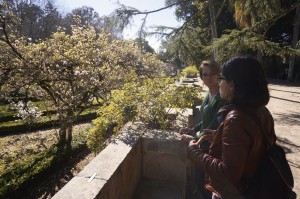 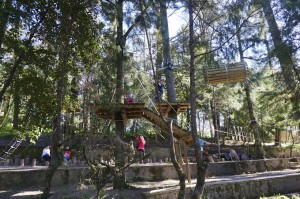 Near the botanical garden is the aqueduct that fed the castle that originally sat on top of the hill, and which was rebuilt in the 16th century. It’s an odd trick of the eye – it absolutely looks like the water would have to flow up hill.

Then it was on to the University of Coimbra, founded 725 years ago. Under their fascist system in the 20th century, a lot of the original buildings were replaced with Stalin-esq structures (think West Bank of the University of Minnesota or anything in Soviet Russia). However, a few of the original buildings remain, including the reason we were in Coimbra in the first place – the library. 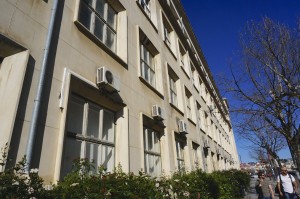 We couldn’t take photos inside the library, but you can take a look online to learn more. It’s a beautiful space. The walls are two feet thick, for temperature control. It has special little doors to let in bats, so they can eat any bugs that might be inside. The books are still available to researchers at the University, and the space itself is truly a temple of knowledge.

One convenient feature of the Coimbra library – it has its own prison. When the University was founded, it was responsible for administering its own justice. Damaging a book in the library might warrant a few days stay in prison (though you were still expected to attend class), while more serious crimes might land you in the solitary confinement cell.

The whole University was buzzing with life – 725 years means there’s plenty of time to develop traditions, and the students have obviously embraced it. Each discipline has a unique set of traditions, with their own colors and rituals. We saw student groups playing music, dancing, and engaged in different types of celebrations. Many of them were wearing the black cloaks that are typical of the University, which gives the whole place a Hogwarts feel.

We wrapped up our tour by looking at a few other sites around campus, and one of the other churches in town. The blocks on this church each bear the mark of the person who was responsible for carving it (because that’s how they were paved). A few of the stones also have some arabic writing. Nobody is sure whether the arabic writing was added by as a bit of graffiti, or if the stones were repurposed from a mosque. 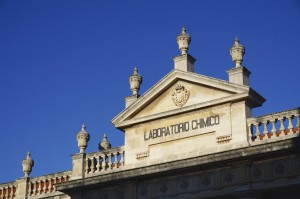 For dinner, we wander the alleys of Coimbra for a while, before settling on a small place not far form where we ate last night. We got a chance to try the goat boiled in red wine that we’d learned about earlier in the day, and it was fantastic. Although Portuguese food isn’t as vibrant or exciting as some other countries, done well, it develops some really deep and comforting flavors.

1 thought on “Where the history comes from”