Up until today, we’ve been living pretty healthy lives in Barcelona. Plenty of walking, and only eating small tapas and sane amounts of pastry. Clearly, this situation could not be allowed to stand. Enter the Culinary Backstreets Made By The Mediterranean tour.

We met our tour guide Sandra at Santa Catarina Market. It was a private tour, scheduled to run from 9:30 until 3:30, so we knew we were in for a lot of snacking.

Before we get into the play by play, an admission: we were so busy eating, we kind of forgot to take pictures of the food. Time to take away our foodie cards.

Things started off with a torta, a spanish potato/omelette combination. This one was done perfectly – the potatoes and eggs blended to a single texture, and the whole thing is lightly fried. We took a tour of the market – Barcelona has a market in each neighborhood (18 in all). Some of them actually have a modern supermarket within the market, for canned goods and other non-perishables. One interesting find – the egg sellers sorts the double yolk eggs separately, as the folks here love to fry those. 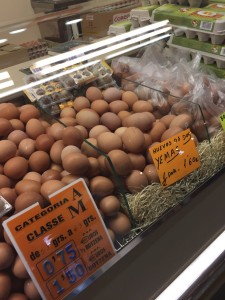 The market is full of deliciousness – sea food, amazing meats and cheeses, and a huge assortment of vegetables and fruits, as well as a lot of ready-to-cook items. We tried cod fritters, olives, and cherries. We learned that Jamon Iberico comes in a variety of qualities, depending on whether the pig foot is white (ok quality) or black (better) and whether it’s from the front legs and shoulder (good) or the rear leg (great). The market also has a display of the archaeological history at the site – from a roman settlement to a series of monasteries to a series of markets.

From the market, we went just a few steps to a shop for breakfast number two – this time, meats and cheeses. One of the most interesting meats was a sausage that’s made with eggs.

Next, it was time for the first dessert – a very odd pastry. This was a dry pastry, topped with pine-nuts, and made with chopped up fried pork skins. It wasn’t sweet … mostly just odd.

Next, obviously – second dessert – horchata and nougat. Nougat is all over Barcelona, and is apparently a holiday favorite. 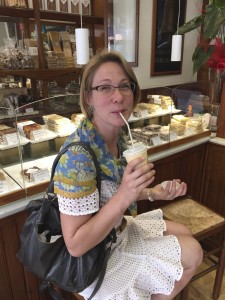 We also popped into a store that roasts and sells a wide assortment of nuts, plus lots of other delicious snacks. They do all the roasting with an indirect wood-fired roaster, which was quite a thing to behold. 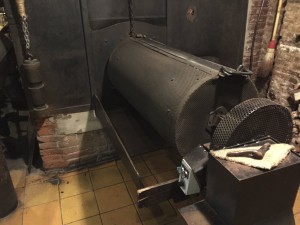 From there, we journeyed out to Barceloneta, one of the newer neighborhoods. Made with infill, it’s the home of the fishermen and (mostly) the beach-bound tourists. Our first stop was a small bar for potato bombs (potato and meat, in a ball, fried and topped with aoili and spicy sauce) and grilled squid with white beans. It was all amazing, and it was the kind of place we might have been a bit intimidated on our own.

The tour then took us down to the harbor, and out to a restaurant next to the fish auction. You have to clear a security checkpoint to get there, so it’s definitely not tourist-friendly. Today’s catch was fried anchovies and small shrimp. We ate far too many of both. As an aside – normally they have 5 or 6 people on this tour, so we were eating for a crowd.

By this point, we were getting pretty full, but this just amused Sandra. Time for cod! Whereas in Portugal, cod is the national food and is everywhere, in Spain it’s considered a high class food. It’s a much higher quality, and much more expensive. The most common preparation is to do it in a simple salad with some oil and vinegar. That’s what we had at this stop, along with some homemade vermouth.

Finally, the walk took us to an artisanal grocery for more ham, more bread with tomato, Cava (their non-DOP-infringing version of Champagne) and an amazing fried and custard filled pastry. 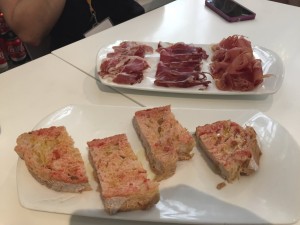 Suitably comatose, we found a park bench to collapse on for a few hours.

After literally drooling on ourselves and mumbling incoherently for a while, we got up the energy to visit the Picasso museum. While the museum doesn’t have any of Picasso’s most famous works, what it does have are many of his early pieces, and his sketches and studies. This gives a fascinating insight into the amount of work and iteration that went into each piece. You also get to see what a talented traditional painter Picasso was, before taking his turn towards cubism and modernism.

While walking from the museum to the metro station, Kat spied a jeweler’s bench peeking over the second story of a small shop. In we went. Joel was fantastic and his work was incredibly sculptural with a strong use of multiple planes. After exchanging information and buying a gift, he sent us along another path to more artisan shops. One lovely leather wallet for Kat later, we were finally headed back home for the evening, where we spent the rest of the night on our patio.

1 thought on “Making up for lost pounds”