Catching up a bit – haven’t blogged the last two days, as they’ve been work days for both of us. I spent the time in sessions at the conference, and Kat’s been working out of the apartment. The conference was fascinating, though I don’t bore you with details (UofM folks: I’ll bore you separately).

Kat enjoyed mornings of water color painting and children’s book writing on the terrace until the sun snuck up around 10 am. Then it was inside to the AC and the desk job for AGI. Interestingly, this is the first time she’s been working in the same time zone as her project coworker which has made communication far easier. Due to the time difference and the Great Heat of the summer sun we’ve been working until around 7 pm every day.

We did manage to get out a little bit in the evenings. Monday night, we followed Rick Steves’ walk through the Gothic Quarter, which winds through lots of the oldest streets in the city. Barcelona is (obviously) a very old city, and the Gothic Quarter takes you right back to Roman times. One of the things that makes the city so much fun is that it’s not frozen in time. While the Renaissance snapshot of Florence is great, Barcelona has many more layers on offer. It’s a jumble of Roman, Renaissance, Modernist, Fascist, and everything else.

Our walking tour included a stop for Orxata – Horchata. While fundamentally similar to the Latin American drink, here it’s made with tigernuts and has a very different flavor – it tasted like candy. 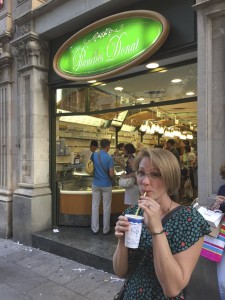 Tuesday night, we went to the “Eixample” neighborhood, which is home to the most drippy of the Gaudi buildings. Our first stop was Vom Fass for some balsamic vinegar. We sent a long time tasting and chatting with the owner (?) of the store, who was willing to talk to me in very slow Spanish (though he spoke English just fine). He insisted that Kat could understand him if only he spoke slowly enough and gestured appropriately. It was a very welcoming experience.

From there, we followed another Rick Steves tour of all the modernist architecture, before ending up at a Galician restaurant for some pulpo gallego and caldo. 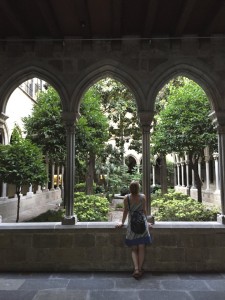 Right now, we’re sitting on our terrace, enjoying some morning coffee and yogurt, catching up on work. We’re doing a guided food tour today, focused on sea food. This is our first tourist day so hopefully we’ll have a lot more to report later on.