This morning, we had two missions. Mission the first: good churros with chocolate. Mission accomplished, thanks the helpful mini-guide that Sandra gave us yesterday. We took the metro to Xurreria Trebol and ate a healthy breakfast of fried things dipped in liquid chocolate. 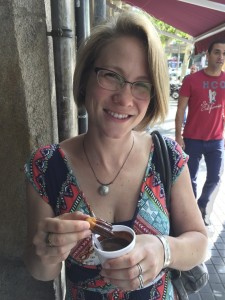 Mission number two, of equal importance, was to visit the Sagrada Familia church, Guadi’s not-quite-done-yet masterpiece. Kat hasn’t been impressed with the Guadi architecture that we’ve seen around Barcelona, but was properly astonished by this place. Having visited a lot of churches across Europe, this was an unexpected delight. The outside is impressive, but the inside is the real shock – the colored light, the lightness of the columns, and the organic feel of it all. There was quite a bit of wide-eyed open-mouthed staring upward. Truly worth the 150 years of work. We hope to visit again one day when it’s done. 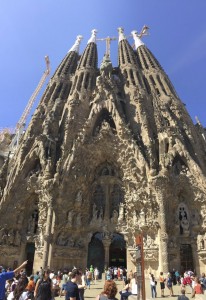 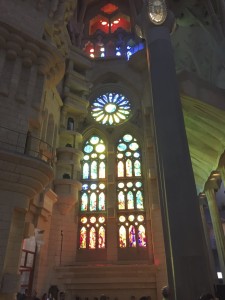 The museum below the church is another revelation – a chance to see the evolution of Guadi’s thinking about the space, as well as the process by which it was designed. The “hanging models,” built from little sandbags suspended on strings to determine the exact angles for the arches, were brilliant and stunning. 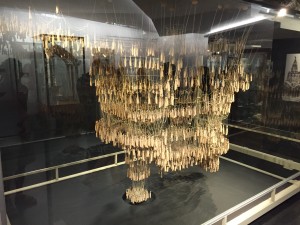 After our time in Sagrada Familia, we were feeling pretty positive about Gaudi, so we struck out for Park Güell. Intended as a housing development for fancy people, it was a flop and ended up a public park. We didn’t realize that you need advance tickets to enter the most Gaudi-rich section, so confined ourselves to the more nature-rich part. But we had cheese-puffs, so all was forgiven. 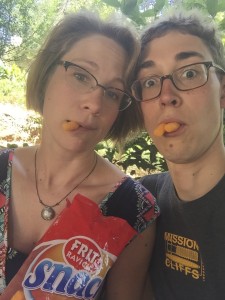 We lounged, listening to some buskers, me reading while Kat sketched. Eventually, our stomaches started demanding non-Cheesy-Puff food, so we took the metro back into the city. Having had churro-success thanks to the guide book earlier in the day, we followed another recommendation for lunch at Casa Lucio. By far our fanciest meal of the week, and also the best. The waiter spoke very patient Spanish, and we had a remarkable fig salad, a fried-egg, mushroom and potato dish, a mango-jamon-pate plate, and an amazing cheese-prune dessert. It was a suitably European 2 hour lunch, and we loved every minute. 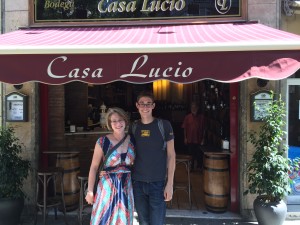 Our final cultural stop of the Museum of the History of Barcelona. It’s essentially an extensive walk of archaeological excavations, from the Iberians to the Roman era, through the Visigoths and on into the Episcopals and the Moors. It’s a very well preserved site, with a lot of “daily life” buildings well documented and easy to understand. And it goes on and on – you’re walking beneath a palace and a lot of city streets as you stroll up and down through time. 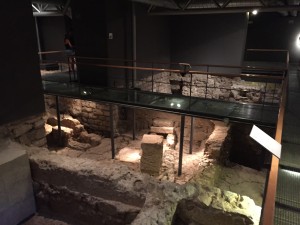 Then it was time for one last gelato before catching the metro home for a night of snacking and catching up on work. Kat pulled all the couch cushions, pillows and blankets onto the patio to build a complete nest, and we enjoyed the cooler evening and beautiful sky until nearly midnight.