Today was our day to explore Kuala Lumpur, before continuing on to the islands. We headed out from our hotel in the general direction of “Little India”. We stopped along the way for breakfast in a more traditional Malay neighborhood. After standing awkwardly outside of a cafeteria-like eatery for a few minutes watching the proceedings, Colin led the way. We smiled and pointed and were treated to a delicious breakfast consisting of rice, curry sauce, eggs, little fried fishy bits, beef and chicken. This is a version of nasi kandar which is Malay for “pile of delicious things all mixed up” (more or less). Spicy breakfast is the best. 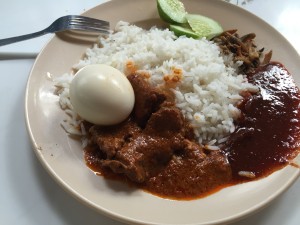 We continued our wander through some street markets (with a stop for a few mini-donuts). The markets are a mix of food (everything from vegetables to fish) and random consumer goods. 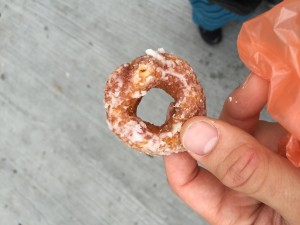 We stopped for a coffee at “Lokl,” a hipster shop that would be happy to serve you a very fancy waffle, were you so inclined. We stuck with coffee and a “smooshie” (which, all things considered, is a very appropriate name for a blended up mix of fruits and yogurt). 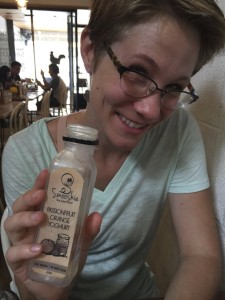 Wandering Kuala Lumpur, you’re exposed to a wide range of architecture. It’s a very young city – the vast majority of it has been built in the last 60 years. Even the “old” places in the city are rarely more than 100 years old. The dramatic economic improvements of the last 20 years means there’s also a strong divide between the “poor Malaysia” architecture and the “rich Malaysia” architecture. Mixed in among the skyscrapers and fancy buildings, you find low mosques, temples, and dilapidated buildings. 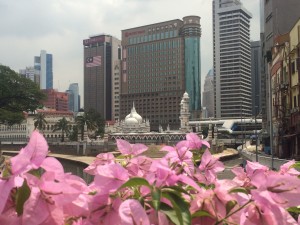 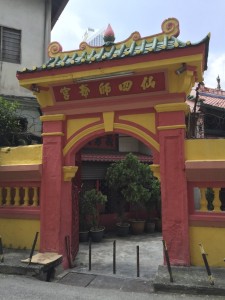 Our next stop was the National Textile Museum, a free tour through all the types of textile manufacturer techniques in Malaysia. It’s a fantastic place – step by step explanations of each process, with examples of the finished product and all the intermediaries. There was also a room for “adornments” – jewelry. Kat got a little overstimulated. 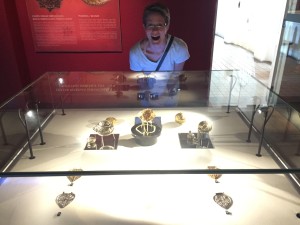 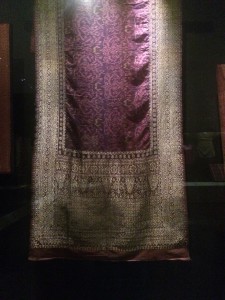 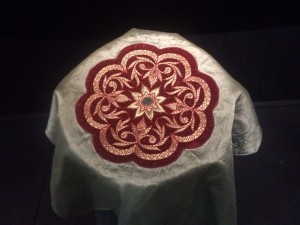 The reality is that all this “cultural stuff” is mostly just to fill time between meals. Fortunately, by the time we left the textile museum, it was time for lunch. We walked into Chinatown and, after strolling the open air market, found a hawker court (a bunch of vendors organized around some tables) and ordered. 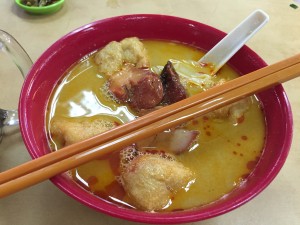 Pork ball soup and curry noodle soup. Along with a couple iced coffees (with sweetened condensed milk). I can’t think of many better ways to spend $4.

After lunch, we realized we had enough time to head to the Batu Caves, which are just north of the city. We hailed an Uber for the ~20 minute ride. The Batu Caves are natural caves in the limestone hill, and are host to a Hindu shrine and various festivals. It’s hard to capture the scale, but this is a seriously large cave. 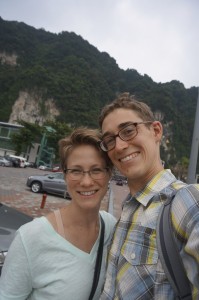 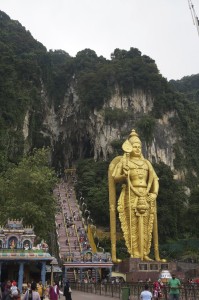 After climbing a not-insubstanial staircase (with plenty of monkeys), you can head inside and find … well, not a lot really. Just a big empty space in a very cool cave. 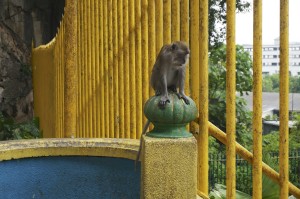 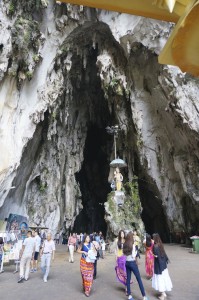 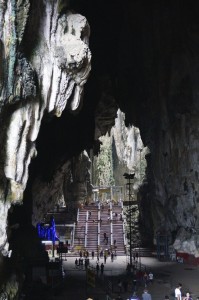 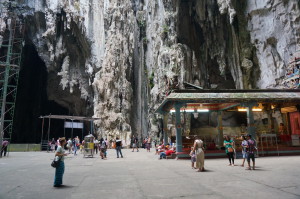 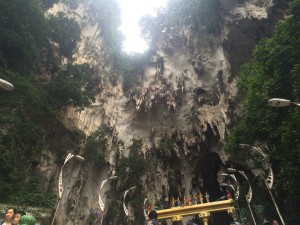 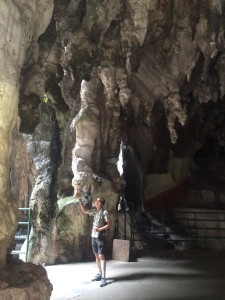 After leaving the main Batu cave, we followed a side path for the “dark cave,” a paid-tour of a separate cave. In the past, it’s been a tourist-trap or trash dump, but it’s recently been taken over by a group focused on conservation and research. We took a 45 minute tour with a very nice young guy who also does research there. The dark cave is home to a number of unique species, as well as over 200,000 bats (both nectar and insect-eating). There’s … a lot of bat guano. 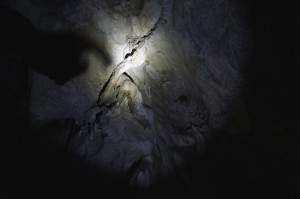 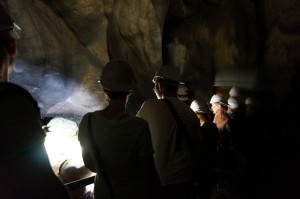 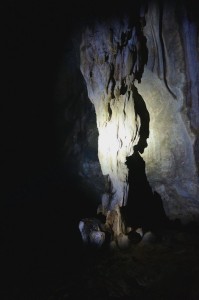 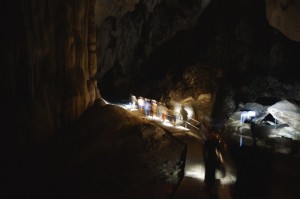 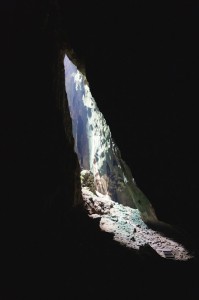 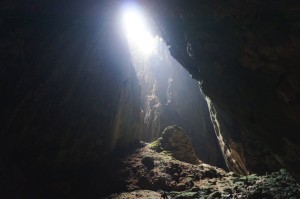 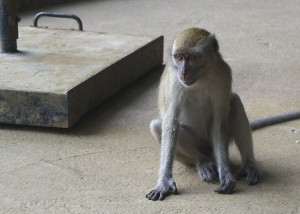 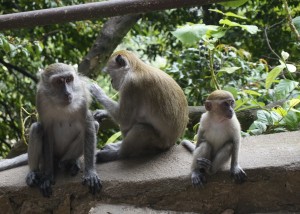 After the tour, it was back to the hotel for a shower and a rest. Then we walked the KLCC park next to the hotel and stopped by the Petronas Towers to check out the view. 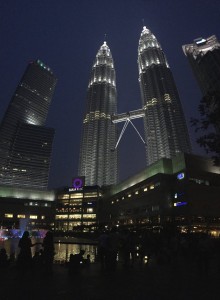 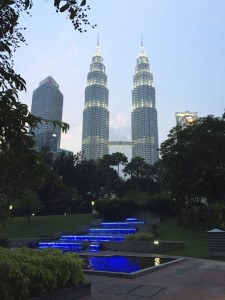 We continued along our way to Jalan Alor, a night-market street, for dinner. Fried squid, chicken satay, and garlic beans. An unfortunate experience with “durian crepes” led us to finish the night with coffee ice cream… it barely covered the flavor… 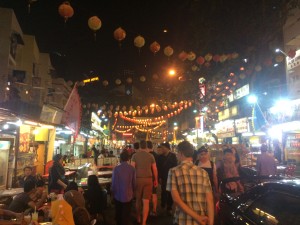 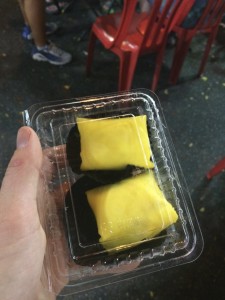 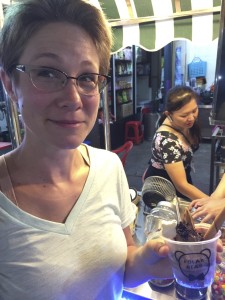 During our walk home, Kat discovered a large cat-like animal slinking through the KLCC park outside the hotel. Unfortunately, she didn’t get the opportunity to snuggle it. After some internet sleuthing, she determined it was a civet. But now, it’s time for bed and another adventure tomorrow.

1 thought on “Surprising lack of koalas”