Today was day one of SCUBA for Kat, which meant a “refresher dive” to get checked out by the instructor. We had breakfast (roti canai and naan) and then went our separate ways. As an aside, the restaurant uses appropriately large coffee mugs. 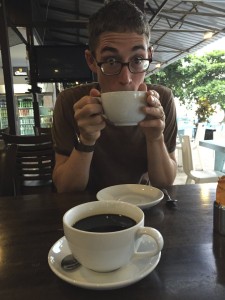 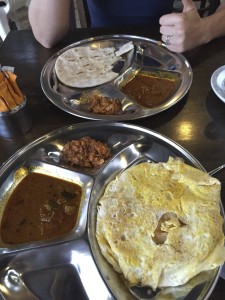 While Kat did her course, I checked out the trails on the island. They’re pretty rugged, but cut across the island in a ~4 mile loop.

Along the path, you get to see the water treatment plant (wooo!) and a couple creepy abandoned resorts. I had a bat escort me for a good half an hour – swooping in front of me, then swooping behind. I guess I was a magnet for insects (as per usual). After the hike, I claimed a hunk of rock and read, until Kat got back from her course.

Kat’s turn! The SCUBA refresher dive went as well as can be expected from not having been in the water for three years. I had to complete a bunch of tests, or tasks underwater – I bumbled around a bit but managed to repeat everything enough times to please the instructor. I did get to enjoy some marine life in between tests – plenty of fish, large clams, anemones with clownfish, branching corals, brain corals, large polyp stony corals, and a lovely nudibranch.

After meeting back up and grabbing some lunch next door at Mamas, we hit the beach. Kat brought her mask and snorkel, so we were able to poke around a bit. I can’t see much of anything sans-glasses, but I do believe we saw a number of stingrays, many fish and some nice coral. Kat also got to see a sea turtle and a small black tip reef shark, though they were both beyond my focal distance.

We tried our best at the whole “just relax on a beach” thing, and then, fully relaxed, caught a water taxi to the other island (Kecil) to explore some more. The other island is more backpacker centric – though it looks to be quickly moving upscale, there are still places where you can rent a tent, and the “long beach” area is definitely oriented towards the folks staying up late to party on the beach. As middle aged adults, we turned up our noses.

It wasn’t quite time for dinner yet, so we walked down along a newly-built pier at the north end of the beach. We watched some stingrays and fish avoid some snorkelers, then climbed down to the rocky shore to explore. Both islands are constructed of continental material – ancient magma bodies that have been pushed up to form weathering-resistant plugs above the water. The big island is mostly granite, while the smaller island has both granite and granite-without-quartz (called syenite). We traversed the coast north a bit to look at the formations – an activity made more difficult by Kat’s ankle-length dress. Once well away from the beach swarms, Colin read a book while Kat poked at tide pools. Once hungry enough, we returned to the beach for dinner at Bubu’s restaurant. 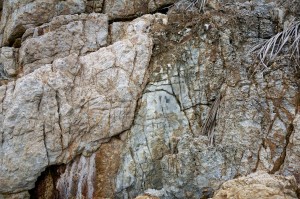 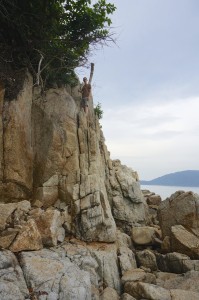 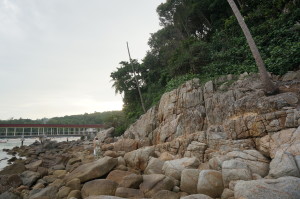 The last bit of excitement for the day was the water taxi ride home. It was fully dark by the time we were ready to head back, which meant the fellow driving the motorboat brought along a flashlight. It was pretty surreal to be speeding across the South China Sea under a moonlit sky, using a flashlight for navigation.

1 thought on “SCUBA duba do”