Day three on the island. Walls are closing in. Everything’s gone gray. You think you know? You don’t.

Wait no, different island. On this one, we got up early so Kat could prep for her dive. Breakfast was roti canai at our hotel (resort? Where’s the line?). It rained all morning, so while Kat dove, I mostly busied myself with some work on our porch. Eventually, the rain cleared and I crawled around the rocks for a while. Even though I can’t see much when I wear the snorkel mask, the water is so clear that there are plenty of fun things to see if you just linger on a rock for a while.

Now we’ll switch voices to Kat for a little bit, so she can talk about diving! (This whole two person blogging thing is weird)

Oh hello! Today our dive site was Sugar Wreck – a ship that sunk in a storm in 2000 carrying a cargo of sugar. We dove the wreck because the Italians I was joining had already been on the island a week and had seen most of the other sites. There were so many divers in the water that we were piled on top of each other. Visibility was very poor and I lost my fin on the descent – but we still had a good time. Josh was nice enough to point out a lovely blue nudibranch for me since I had told him previously they are my favorite. Although feeling a little sheepish for having lost my fin within the first two minutes of the dive (it was later recovered by the waiting boat above), I enjoyed the trip and signed up for the next morning. 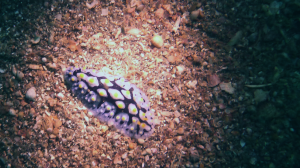 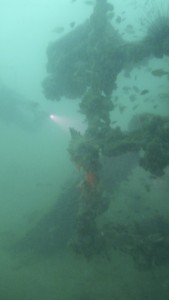 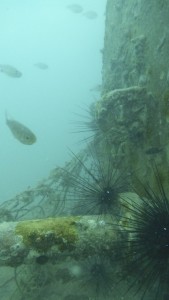 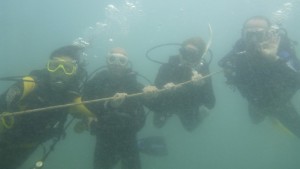 Upon returning back to the dock, Colin and I reunited and decided to go on a land adventure. We trekked southeast through the jungle to the other side of the island. I was completely drenched in sweat. We emerged triumphant onto a lovely white sand beach (flora beach) where we shared a chocolate smoothie and some lunch. We decided to take the alternate jungle trek home – and were rewarded by running across a massive water monitor lizard and a few trees full of dusky langur monkeys. Alas, no pictures of the lizard since I yelped with surprise and scared it off before Colin could snap a photo. The monkeys here are absolutely adorable but Colin insists that I can’t take one home. 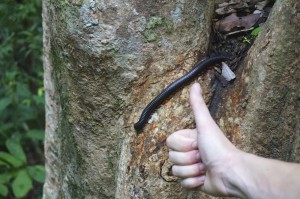 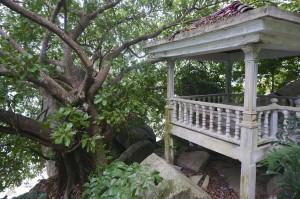 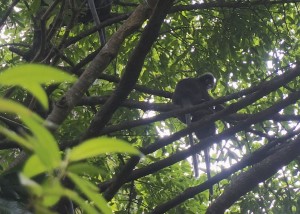 (Colin again) It’s not like I don’t want a monkey too. I just feel like, given the antisocial tendencies of the dog, introducing another near-human into the house might be stressful.

In any case, after the hike, we cooled off with a blended red bean smoothie (yup) and then hopping in a two person kayak for another trek. We paddled north, around two different points to reach a part of the island we hadn’t yet seen. We don’t know the name of the beach we eventually pulled up on – near one named Turtle Beach, but smaller and more secluded. There are no hotels on the north side of the island, so the only folks around were a few snorkelers that had been dropped off by water taxis. 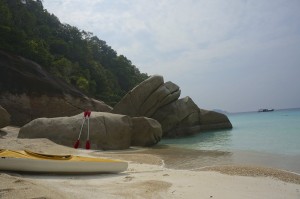 The beach was gorgeous – huge boulders, great sand, and tons of activity under the water. We snorkeled, poked at the fish, and just floated quite happily. I got to do some climbing, as the boulders had some nice climbable cracks. I even got to jump from the boulder into the water. Not exactly deepwater solo, more like “5 feet jump into some water” but hey, getting closer. There was some crazy geology on the beach too – different magma striations in beautiful patterns. 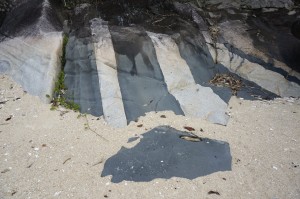 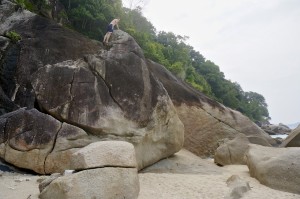 After lounging around for a while, and eating some Cheezels (onion-ring shaped cheese puffs) we did the return paddle. The rental kayak and aluminum paddles were pretty brutal – not exactly an Eddyline.

Upon returning, we had some mandated “lounge” time, reading our kindles by the water and watching the sunset. Then we had dinner somewhere new – a Thai/Chinese restaurant that made some really delicious Tom Yam and curried glass noodles. It was threatening to storm when we sat down, so they ended up moving us “inside,” which meant a table in the convenience store. It had a certain ambiance. 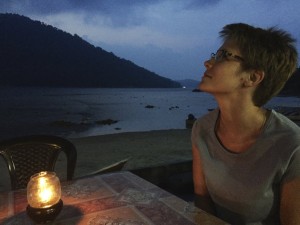 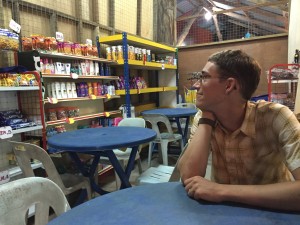 Tomorrow is our last full day on the island – we’ll do our best to take advantage of it.