This morning was mostly a repeat of yesterday – up early, quick breakfast, then going our separate ways for a bit. After grabbing an extra cup of coffee, I decided to take my Kindle down the shore a ways. Now, I’m a pretty non-confrontational guy in general. I’m not looking to pick a fight. However, there was a sea eagle who apparently didn’t get the message, and decided he wanted my head. Or perhaps, more accurately, my white hat. 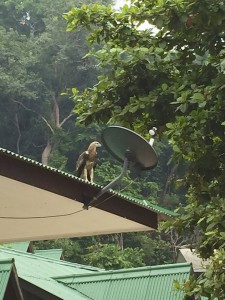 This large, rather pointy bird swooped on me repeatedly, close enough that I touched his feathers. At one point, I had to dive in the sand to avoid him. The old Malaysian guy on the beach thought this was all pretty comical, which in fact it was.

Thankfully, after perhaps 10 minutes of dodging him, I was able to put enough distance between us that he gave up the hunt. A memorable event that thankfully didn’t require stitches.

As a reward for surviving, I treated myself to an iced coffee and a roti canai. Only fair I think.

While I was dodging death from on high, Kat was exploring life below, and will now type words.

The dive today was much more enjoyable than the last two. A pair of Parisians joined us and our group of seven headed off for Sea Bell – a quiet coral mound just south of the small island. The visibility wasn’t great, as per previous dives, so I didn’t bother to bring a camera. With new smaller fins and a borrowed mask, the dive went smoothly. Coral in every direction, giant schools of fish, and no one to bother us. 50 minutes well spent below the sea. A great start to the day. 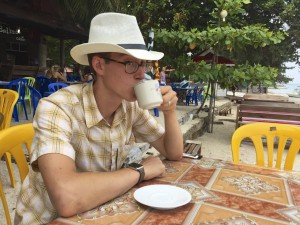 Once we met back up, we had a quick snack (more roti canai) and then caught a boat to the small island. We loaded up on provisions (cookies, tomato-flavored potato puffs: normal adventurer items) and then set out for some of the more remote beaches. The path to the beaches was cleared as part of the construction of a cell tower and wind farm / solar installation on the peak of the island. It appears they cleared the path by cutting everything down and then burning it, which is a little eery to walk through. It’s now a seriously eroded wash, which is beautiful, if a little uneven. After a steep climb, and a steep descent, we made it to the first beach and had a swim. 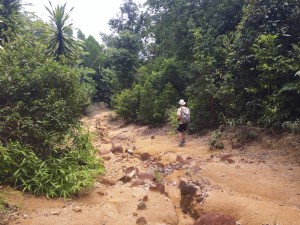 The beaches on the west side of the island, being less protected, tend to be rockier and less swimming-friendly than some of the others. We only saw a handful of people at each. From the first beach, it was a short jungle trek to the next. 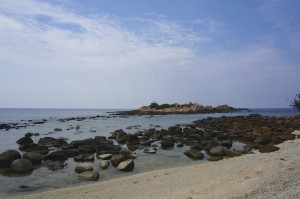 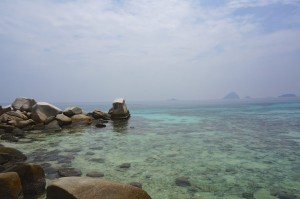 At this point, we were running a little low on water, so we took an inland trail to the northernmost resort on the island, D’Lagoon. We bought some water, and read all of their helpful signs (every one of which warns about the various ways in which your items are almost certainly going to be stolen). D’Lagoon also has an extensive network of trails intended for their ATVs, which apparently they rent to tourists. This makes the hiking luxurious. We took one back across the island to the last beach, nominally named “turtle beach” (there seem to be a lot of beaches with that name here, so it gets a bit confusing).

We claimed some sand, floated around for a bit, and had some snacks. At this beach, we were almost entirely on our own, and had a great view out to some of the uninhabited islands nearby. We were sad not to have appropriate footwear for wading out over the sharp rocks.

Having reached Peak Adventure, we decided to make the trek back to long beach. We interrupted a few clouded montior lizards basking along the trail home. Although Kat noted a number of butterflies and did her best birder impression, she’ll have to consult with Aunt Deb before she can report on the varieties we saw. 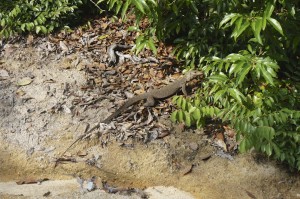 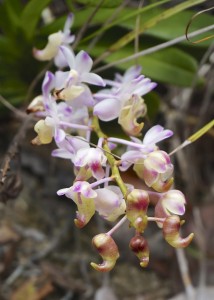 A well-deserved ice cream treat was a must before catching a taxi back to the “good beach” on our island. We floated, snorkeled, and explored some easily accessible reefs, before heading home for a shower (with a quick stop for monkey-watching) 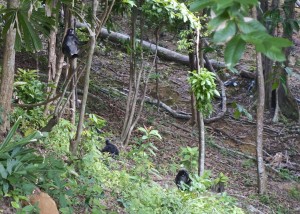 2 thoughts on “Freedom Strikes Back”