This morning Colin woke up early to unbolt the giant wooden front door to “our” shop. It turns out, our apartment is a traditional Chinese shop – with the store in the front room, and the living quarters upstairs. If a customer walked all the way through the shop, they’d end up in our kitchen (there is a NO ENTRY sign taped to a chair preventing this from happening). The property is owned by a British expat (former interior decorator) and the jewelry is made by a Dutch couple who live in town.

For first breakfast, we stopped into a hipster coffee shop called China House for some fancy cakes and coffee. They have a theater in the back of their shop and seem to be very active in the local art scene. As an aside, street art is a big deal here. The most famous of which are by Ernest Zacharevic, however a cat-themed collection by Natthapon Muangkliang, Louise Low and Tang Yeok Khang is also really charming. There are a bazillion more of course and I keep asking Colin to take pictures whenever I spot something new. 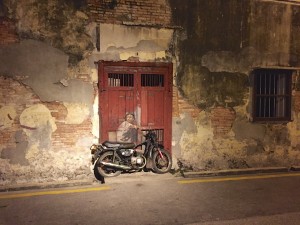 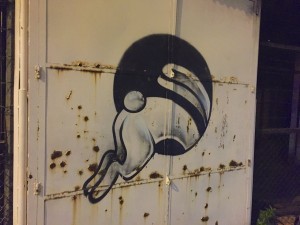 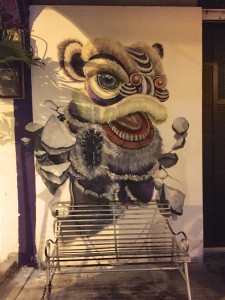 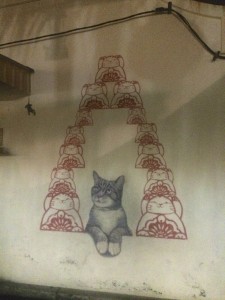 OK, so second breakfast – Roti Telur at a street stall about 15 minutes walk from our place. We sat in an alley next to a table full of Harley Davidson guys. Apparently we manage to find a Harley gang in every country we visit. It was a delightful spicy street food breakfast. 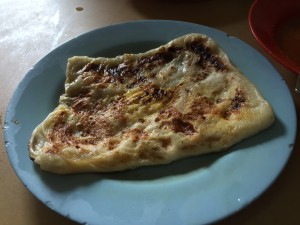 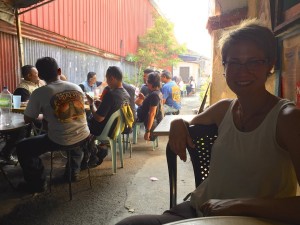 We then happened upon a collection of papier-mâché tapirs… which led us to the book launch for “The Mystery of the Missing Tapirs”. Kids were playing a giant board game on the street and a local silversmith created a stunning tapir-themed line of jewelry for the occasion. The author, Patricia G.I. Chew, and the illustrator Ong Lyn-Hui were extremely passionate about the project and I’m excited to read the book. 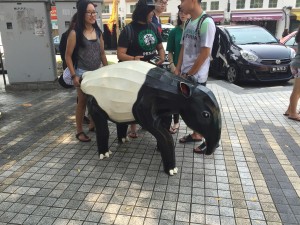 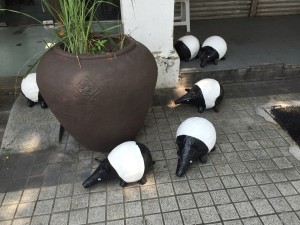 A quick uber ride later and we found ourselves at Kek Lok Si, the largest Buddhist temple in Southeast Asia. It’s a sprawling complex, built on a hill (with its own mini-funicular). We poked around the complex and admired the elaborate architecture (those roofs!!). 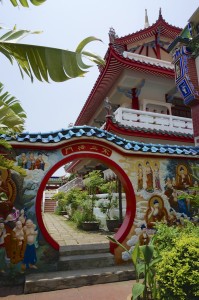 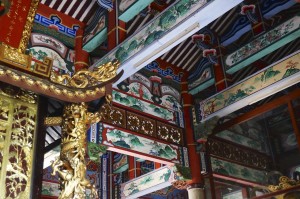 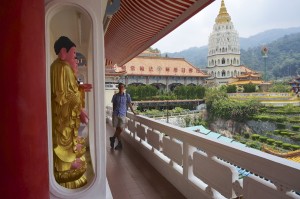 Below the temple, we wandered along a street to a Laksa stall Colin had bookmarked. Some website had tagged it as the “Best laksa in Penang.” It turned out to be the same stall that Bourdain went to on his No Reservations episode in Penang. We ordered two bowls and shared a table with some local girls. Through some careful creeping, we observed the right way to eat our noodles (piling them onto the spoon with the chopsticks) and devoured our soup. 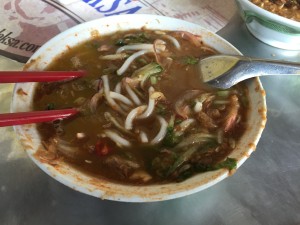 A 15 minute walk brought us to the base of Penang Hill. We rode the funicular up to the top (quite steep – over a mile of funicular track). The top offers great views of the whole city and on clear days, views to the mainland. It was cool and pleasant up there. There are also all sorts of attractions – a temple, an owl museum, etc. We didn’t linger too long though, as we decided we wanted to try the hike to the botanic gardens.

The map said it was roughly 5 kilometers to the garden, via a road. Everyone said it would take about three hours. Those two numbers don’t really agree, so we weren’t sure what to expect. We started on the road, which drops steeply from the top of the hill through a series of switchbacks. It was pretty brutal on our knees and calves, though probably far more brutal for the walkers and bikers we met going the other way (up).

Eventually, we turned off onto a dirt track, and were immediately surrounded by monkeys. Not just a few monkeys, but a lot of monkeys. Monkeys that seemed none-too-pleased with us. One of them pooped on Colin (or took some series of actions that resulted in poop impacting Colin). Stupid monkeys. 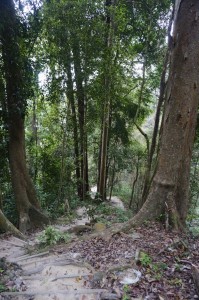 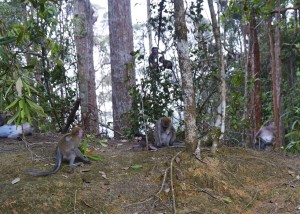 The path became and endless staircase, dropping down, down, down. Over a kilometer of stairs. We’ll be feeling this tomorrow. We saw quite a few hikers going up the other way – brave souls. The path ends inside the botanic garden, conveniently bypassing the ticket booth.

The gardens are an extremely popular destination for locals who are looking to relax with the family, or take advantage of the extensive road network for exercise. We managed to cover the Fern House, Cactus House, Bromeliad House, and the Orchidarium… thankfully Colin noticed as the guard accidentally locked us into the Orchidarium (it was closing time). Another key had to be fetched, but once freed from our beautiful cage, we decided it was probably time to head home. 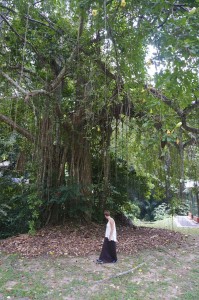 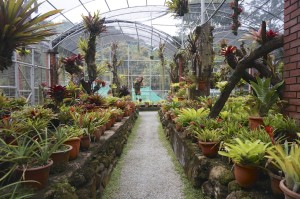 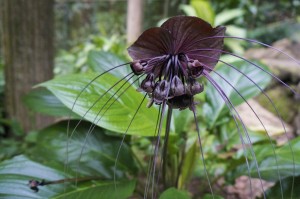 Our driver was unable to drop us off at the apartment because our street was closed – a market/festival had popped up outside the shop. Apparently this happens every Saturday night and we enjoyed a few crepe-like snacks and an iced coffee while watching a group of children preform Tai Chi.

With no clear destination in mind, we ended up in Little India. The fabrics and colors were stunning – but eventually we needed dinner. We found a street vendor selling more Nasi Kandar next to a mosque. Thinking our night was over, we headed home.

A small alley runs next to our shop – and groups of people were walking that way. We diverted out of curiosity and the alley opened into a square in front of a Chinese clan house called Khoo Kongsi. The same children from earlier in the night were preforming Tai Chi, after which an acrobat(?) performer took center stage. The show was very entertaining.

It’s time to rest up now for our food tour tomorrow.