Today was cooking class day. We were picked up from our apartment at 9 am and were taken to a wet market for a tour. We were joined by two women from Hong Kong, a couple from Australia, and two men from England. Our cooking class instructor was Pearly – a member of the Baba Nyona community. This means that she has Chinese-Malay ancestry and her family has been in Penang for many generations. They speak a local language that is a combination of Chinese, Malay and English all mashed together.

At the market Pearly showed us many different items and explained their health benefits according to Chinese medicinal traditions. The British diabetes specialist nodded politely as she explained how eating this particular item would cure diabetes within three days (or something of that nature). Of Asian descent himself, apparently he was very used to hearing these arguments from his older relatives.

After poking at the many varieties of ginger and the black chicken, we tasted some local bananas and stepped outside to try some of the hawker snacks. We nommed on banana leaf rice balls stuffed with shrimp paste, crepe-like sweets full of palm sugar and peanuts, and a mashed-rice-turned-noodle that was steamed, then covered in coconut flakes and palm sugar.

We piled into cars and headed back to Pearly’s house (driven by her very nice husband Chandra). After a quick tour of the herb garden, with lots of sniffs and tastes, it was time to cook.

For those of us unaccustomed to the ‘strict Chinese mother’ attitude, Pearly’s sharp tongue came as a bit of a surprise. “My grandmother would have bonked my head if I made such a mess as you!” “What is this?!” “You do it all wrong! Why you don’t listen to me better?!” Three and a half hours of cooking is a long time if this is not what you’re used to. Only the girls from Hong Kong seemed to anticipate Pearly’s thoughts and were praised for being excellent helpers and good Asians. In the end though, we did apparently succeed in finishing the cooking a half hour ‘early’. 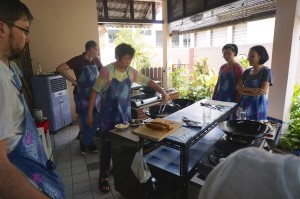 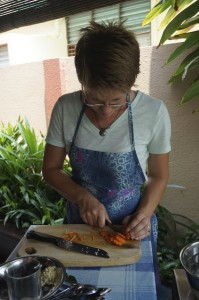 We ate our feast around 1:30 pm, by which time we were fairly starved and exhausted. We had cooked four dishes: deep fried pork rolls, a curried chicken stew, stir fried vegetables, and an egg covered in sautéed aromatics. Our favorites were the curry and the egg. 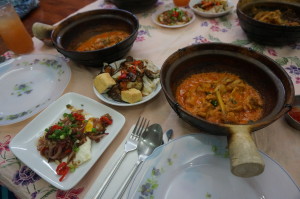 After Chandra very kindly dropped us off at our doorstep, we immediately crashed. Hard.

Two hours later, we dragged ourselves a few doors down to the Armenian Café for some coffee. The Batik Museum is next to our shop, so we decided to take the opportunity to enjoy the art. The variety of styles within the same technique was fascinating. Next stop – more coffee. This time at the China House. We took some time to decompress, read and doodle on the tablecloth (don’t worry, they ask you to).

Since we hadn’t explored anywhere beyond Georgetown, we grabbed an Uber to Batu Ferringhi, a coastal town north of the city. We wandered the night market – which is mostly filled with stalls selling knock-off products: purses, soccer jerseys, watches, fake Beats headphones. I managed to deter Colin from purchasing a drone.

The Uber drive who took us back to Georgetown recommended a hawker stall not far from our house where we could get good Char Kway Teow – which we promptly devoured. We also shared a bowl of Koay Teow soup before heading home for the night.

As an aside, every time we come home I look for our ‘pet’ gecko who lives on the first floor of the house. I met it in the kitchen by the water cooler, but it has since moved into the jewelry shop. It is missing most of its tail so it’s easy to tell which one it is. So of course I googled it to discover that he’s a “Malaysian House Gecko”. Go figure. 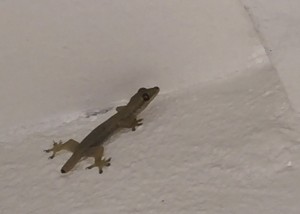