We kicked today off in a leisurely fashion, with a stroll to a kopitam (food-stall-and-coffee-place) for chicken and rice and a random noodle dish. Then we went on to our real destination, the “Blue Mansion,” a Mansion (now a hotel) built by the one-time richest man in Asia, Cheong Fatt Tze. They only do three tours a day, on account of it mostly being a functioning hotel. The guide was great – well informed and funny, sharing both the history of the family and the design principles of the house. 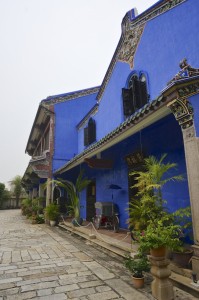 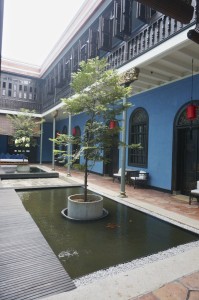 Amazingly, this mansion, like so many other buildings on Penang, was in total disrepair and near collapse in the late 80s / early 90s, before being saved from destruction and lovingly restored. We’ve heard story after story like this, and it really feels like Penang just barely dodged a bullet – the government in the 80s apparently saw Penang as a future Hong Kong, and was hellbent on rebuilding to suit that vision.

After the tour, we popped into another cafe on Love Lane (Kat still refuses to go to “The #Selfie Cafe,” but this one had a similarly cute name, now forgotten). There’s such a strong coffee culture here, both for cheap, traditional “kopi” (very sweet and intense, $0.25 per cup) and more western style hipster cafes (Americanos and the like, ~$2 per drink).

Post-coffee, we split up for a bit – Kat went off to do her Batik lesson (more in a moment) and I wandered up Mcalister Lane for mystery noodles and exploration.

The batik artist, Rozana, received her fine art degree in KL and moved to Penang for her husband’s job. She works in many media but has been focusing on batik in recent years. One of her large pieces hangs in the batik museum next to our apartment. She was a very patient teacher and I thoroughly enjoyed the class. 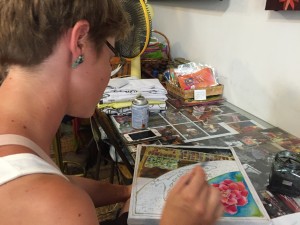 The wax application tool, called a canting, is like a small pot with a spout that is dipped in vat of liquid wax. It was very difficult to control and I made plenty of mistakes, even though she had me practice on paper first. I chose to make my own design – a portrait of our little tail-less gecko that lives in the apartment, a night view of the shops across the street from our house, and a peony, a Chinese symbol of wealth that we’ve seen around town. It didn’t turn out as expected, but new techniques always produce crazy results and I had a lovely time working on it. I won’t be able to remove the wax from the fabric until I get home, but hopefully I can frame it as a souvenir after it’s done. Rozana took some photos that we’ll post after she sends them to me.

After the batik lesson, we had some Ice Kacang (it’s.. weird) and then caught an Uber out to Suffolk House. Once again, a near-destruction colonial building that has been restored and now has a restaurant, as well as meeting facilities. The attraction for us was that in the afternoons they serve high tea. We had a tea and a stack of fancy snacks sitting on a terrace overlooking some gardens. It was all very proper. Except for the adorable puppy who followed us down the road trying to hump our legs after tea… that was less proper but still rather amusing. 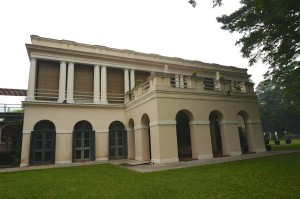 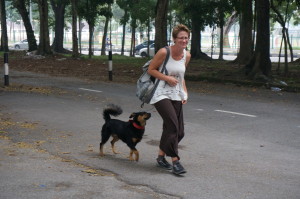 Our final outing for the day (after a pop into China House) was to a random hawker market where Kat had something that turned out to not be porridge, and I had char hor fun. We’re getting a little better at understanding the flow and process of hawker markets, but still a long ways from being experts at ordering. Learning Malay would help, or being able to read Chinese. Or both.