Our first full day in Iceland, and we packed in a lot. Despite the perpetual light, we slept very well in our RV. We woke up and had some instant coffee with yogurt and granola, while the camper shook from the wind. Then it was off to Gullfoss, the largest waterfall in Iceland – and conveniently, just a few minutes up the road from our camp site.

Gullfoss is highly impressive. Two tiers of strong basaltic dolerite overlay weaker sedimentary units, resulting in a breathtaking double falls. The water cascades over the first face only to turn at a sharp angle and tumble into the gorge below throwing up mist and rainbows. The sheer power of the water is overwhelming as it churns and roars over the falls. And in the early morning there were very few tourists around. 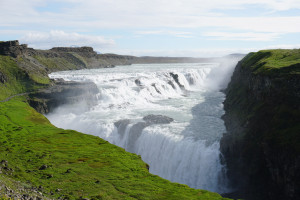 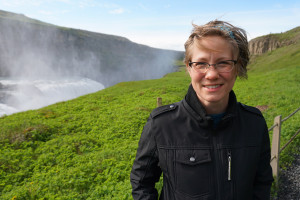 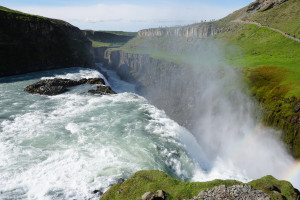 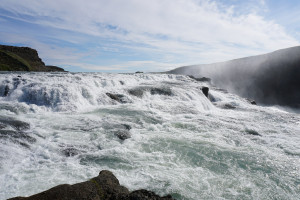 After the falls we headed back past our campsite next to the horse farm and continued on to Geysir geothermal area. This geothermal field is dotted with boiling hot pots and rivulets of warm mineral-rich water cascading downslope. The Great Geysir is only active after large earthquakes, however the smaller Strokkur geyser shoots off at a reliable 6-10 minute interval. We really enjoyed watching the pool inflate before ejection and refill again. The whole place smells of sulfur. We climbed up to the overlooking ridge to get a view of the dramatic landscape dotted with fields of purple lupin flowers, a native of North America. After our trek we enjoyed a cookie and ice cream break at the cafe before hitting the road again. 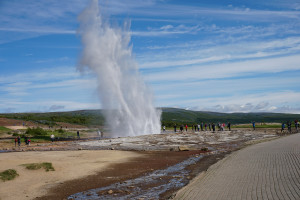 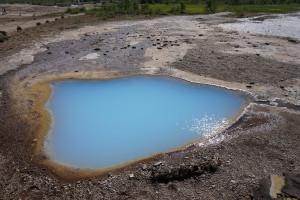 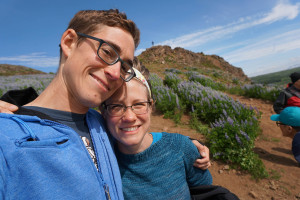 Many miles of ponies and sheep later, we saw a roadside sign for a berry farm. We pulled over and bought some white raspberries and strawberries our for morning yogurt. At the very next turn, we came to the tomato greenhouse. Our friend Dan had recommended a visit, so when we saw the sign we knew we had to stop. It’s a commercial-scale greenhouse facility, growing tomatoes, cucumbers, and lettuce. There’s also a small restaurant. It’s a fascinating facility – they use much thinner glass than a normal greenhouse, because they don’t need to worry about trapping heat – it’s heated geothermal, by water circulating at the base of the plants. The water also provides power, and nearby steam vents provide CO2 to make the plants happy.

After our visit to the tomato farm, we stopped at Grimsnes volcanic field, which is comprised of a series of short rows of scoria cones along volcanic fissures that align with the South Iceland Seismic Zone. We climbed around the rim of Kerith, the water-filled spatter/scoria cone whose crater is deep enough to intersect the water table. We hiked southward along the fissure and admired the various textures and morphologies of the scoria at our feet. The wind and fog were beginning to pick up so we headed back to the car. 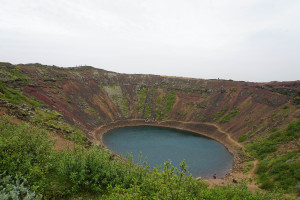 Fully scienced up, it was time for food. In Selfoss, we had our first Icelandic hotdogs (Colin’s was deep fried and topped with paprika, Kat’s was covered in fried onions and various relishes). Around lunch, rain arrived. We headed East on the ring road, with no clear destination in mind. Another roadside sign, this time for a woolworking studio and ceramics gallery. During our planning (such as it was) for the trip, we talked about getting matching Icelandic sweaters. But, it turns out they’re really itchy. So instead we simply admired the Icelandic sweaters, and other wool goods. Then it was back on the road, until another “LOCAL GOODS” sign caught our attention.

This time the shop was in an old quonset hut, and was filled with a mix of art, food, and souvenirs. We picked up some post cards (and a bit of yarn).

As we got further down the road, we moved into the foothills of Eyjafjallajökull (that’s the one that erupted in 2010). It’s basically a series of endless waterfalls, each more impressive than the last. We stopped at Seljalandsfoss, which is a thin but tall drop. Even though it was very rainy and windy at this point, there was a good crowd. You can actually walk behind Seljalandsfoss (though it’s no less wet than being in the rain) and get an amazing site of the sandur plains beyond. 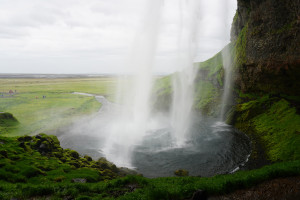 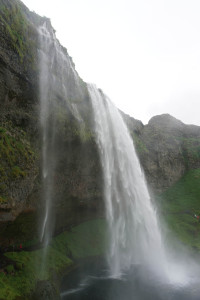 Given the weather, we decided to make Skogar our stop for the night, which will be a good base for a hike tomorrow. Skogar has a fantastic folk museum, with exhibits covering many aspects of the history of Iceland – farming, electrification, the telegraph, and folk art. It also has a set of sod houses, which were moved to the site in the 1980s. Some of them were occupied as late as the 1970s. They’re fascinating to poke around – there’s no heat, and things are a bit cramped, but they’re perfectly functional. The museum also takes a decidedly un-American approach to safety, so you can crawl up to the second floor of some of them. 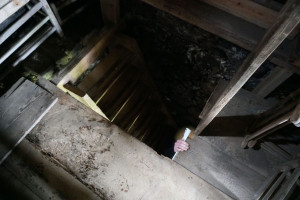 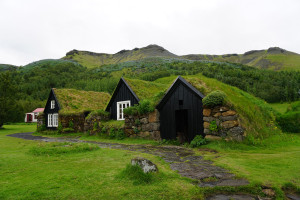 The rain is likely to continue for the rest of the night, so we’ve pitched our camp (well, put on the handbrake?) at the base of Skogarfloss, a massive waterfall that we’ll hike up and over tomorrow.