Let’s deal with the elephant in the room first. I was promised volcano-grilled hot dogs. Lonely Planet said that if we did this hike, from Skogar to Þórsmörk by way of the recently erupted Eyjafjallajökull, we would be able to grill hot dogs over steaming volcano vents. That did not happen. Now, it’s possible the vents were there, but the 60 mile and hour wind and frigid temperatures meant we weren’t looking as closely as we might have. Would it kill the country to put a big (neon perhaps) “GRILL HOTDOGS HERE” sign up there?

Wait, I think we’ve gotten ahead of ourselves.

The morning was crisp and brilliantly sunny. We got up early to start our hike through Katla Geopark. The Lonely Planet guide says to expect it to take around 10 hours, and gives a distance of 23.4km. My Apple Watch says more like 29km, but regardless, it’s a good trek. You start by climbing the Skogafoss waterfall, and then continue inland. There are (again, according to the book, we lost count) 22 individual waterfalls along the path. When I read that originally, I thought “oh well, probably just little drops aside from the big one” but no, many of them are even more impressive than Skogafoss. And they just keep coming! The landscape is immense – mountains, glaciers, incredible steep drops, and plenty of snow. The immensity of the landscape was matched by the charming little bits – the neon green moss, tiny wildflowers and floofy lambs following along after their mothers. 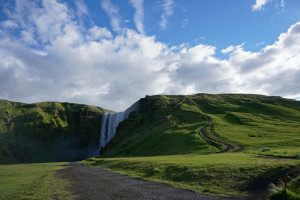 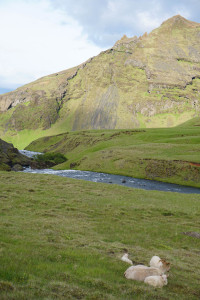 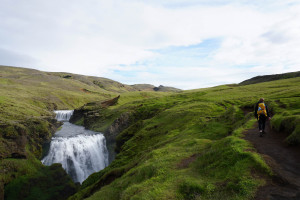 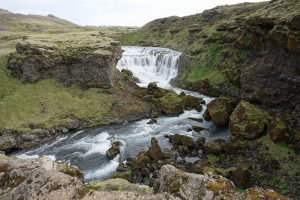 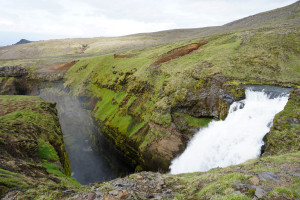 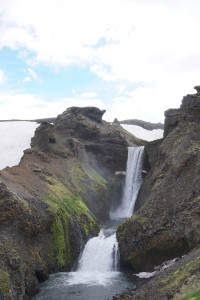 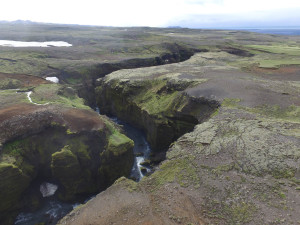 We made good time across this first section of the hike, though with plenty of stops for photos and one drone excursion. There were a few sections that were of the “don’t look anywhere but where your hands and feet go” variety and we were happy not to be carrying tall wind-catching backpacking packs.

Then we came to … the bridge. The guide warned that calling this a bridge is somewhat charitable, and we’d imagined all sorts of scary scenarios – perhaps it’s a log with a soggy, loose rope? In reality, it’s a perfectly cromulent bridge, though weather has destroyed the rail and some of the walkway on one side. But hey, three boards and one handrail is a pretty nice bridge in my book! 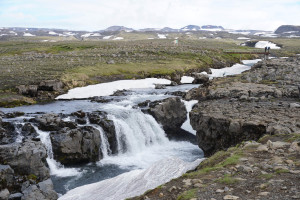 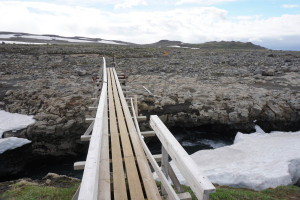 After the bridge, the landscape makes a big shift from lush river to moonscape. This is where the wind really picked up. At times, it was hard to stand upright. The sandblasting effect of the ash from Eyjafjallajökull added an extra level of texture as well. This section, from the bridge to the eruption site, is marked by many snow crossings, multiple steep ascents, and a lot of soggy shoes. Amazingly, there are two shelters on the route, accessed occasionally by superjeep. And apparently a dog. There were dog food cans stacked on the porch of the the first hut. 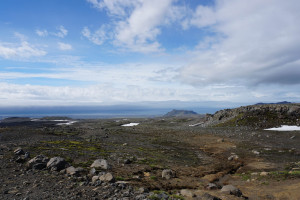 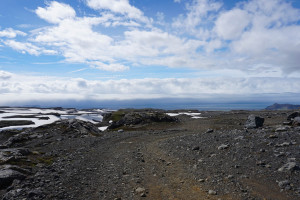 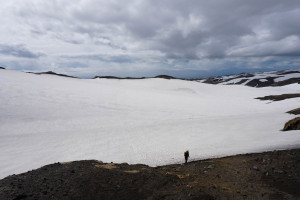 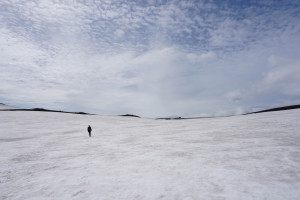 Leaving the ridge with the last shelter, we weren’t sure what to expect. We knew we were pretty close to the eruption site, but we didn’t know quite what it would look like. It seemed like an endless series of ridges, snow traverses, and scrambling up scree. Finally, we came to the two new mountains, Magni and Modi (that second one has a complicated series of special characters in its name). 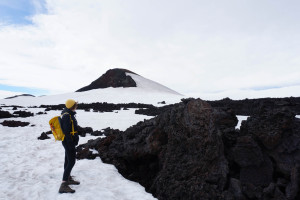 At this point, the wind was merciless – this was the highest point on the hike, with no protection. Even though we were promised fumarole hotdogs, we didn’t linger to look for vents that may or may not have been there. This next section was perhaps the most treacherous, with some delicate placements and a few sections where you needed to lower yourself via questionably anchored chains. We moved as quickly as we safely could, with a goal of just getting out of the wind. 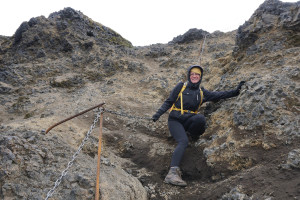 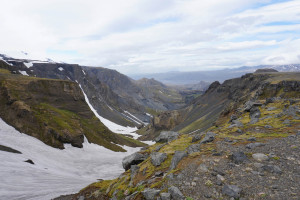 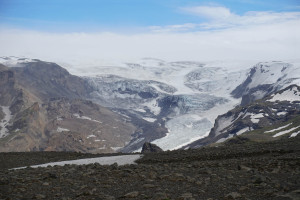 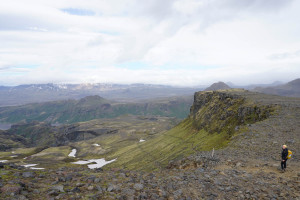 During this time, we were entering Godaland – an epic landscape of giant cliff-faced mountains and massive glaciers. There was no ground cover or connection to the green world from the other side of the mountain at this point. We were tiny dots on the overwhelming landscape.

Finally, a little lower down, things began to calm. A long hike across a flat plateau revealed our destination valley. The wind disappeared as we crested over a ridge into Þórsmörk. A green moss covered landscape of twisting pillars and jagged valley walls. 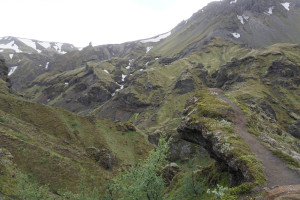 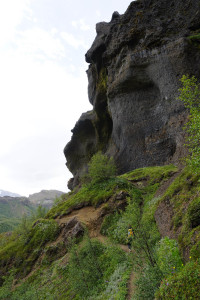 At this point, we had a decision to make. There are two busses out from Þórsmörk in the afternoon – one at 3:00pm and one at 8:00pm. We had tentatively booked tickets on the 8:00 bus, which would have meant getting back to the campsite around 10:30pm. Because we’d made good time, we were on track to (just) make the 3:00 bus, if we hustled a bit. Because the clouds were starting to roll in and we knew it was supposed to rain, we trotted downhill on our last couple miles of descent.

We made it to Þórsmörk with a few minutes to spare. The friendly bus driver welcomed us on board (never mind that our tickets were for another time). A brief word about the bus. Imagine tractor tires and a couple feet of ground clearance, with a fairly normal coach bus on top. Sadly, we failed to get a good picture of this one. It was able to ford deep rivers and climb big rocks without trouble. We followed the long sandur plain out of the Geopark, crisscrossing the river as it meandered back and forth across the floodplain. Many jeeps and 4x4s were headed in as we were on our way out since Þórsmörk is the jumping off point for many deep highland excursions.

We ended up having to make a couple more transfers to get home. One was to a lesser (but still beefy) bus to finish the exit from Þórsmörk, and a third bus which took us from Hella back to Skogar.

Properly tired, we grilled some hot dogs, took our showers, and then camped out in a nearby restaurant with hot chocolates, mostly to steal their electricity for our devices.

1 thought on “I was promised volcanodogs”