Remember how yesterday it was windy up in the mountains? Today it was windy everywhere. Like, really windy. Sustained winds of 40mph, gusts even higher. Oh, and spitting rain. Needless to say, it wasn’t a “let’s go for a leisurely stroll” kind of day. More of a “let’s not get blown off a cliff to certain death” kind of day. Driving and snacks mostly.

We were a bit lazy getting going in the morning, owing to yesterday’s hike. By 8 we were up and going though. Last night, we’d managed to buy some butter packs at the campsite store, so this morning we were able to fry some eggs and toast some hot dog buns for breakfast. Kings of the road.

Our first stop was the black sand beach at Reynisfjara. Here, the wind had an added friend – sand! When we rented our camper, we added the extra sand and gravel protection for the front of the vehicle, but the rest is our responsibility. We did our best to park the van pointed into the sandblasting, with limited success. It was intense enough that you could make your way across the parking lot by jumping straight up in the air and letting it blow you forward.

The payoff is an amazing black beach with a backdrop of columnar basalt columns. The weather contributed to the end-of-the-world feel. Out in the sea, you can catch the foreboding Reynisdrangur sea stacks. Legend has it that they’re trolls, caught in the sun and frozen in stone. Looking the other direction, you can see Dyrholaey, the remnant of a submarine volcano. 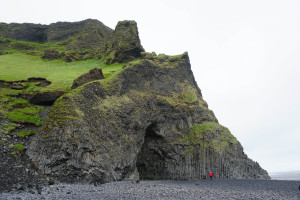 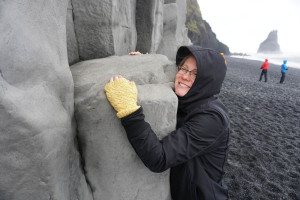 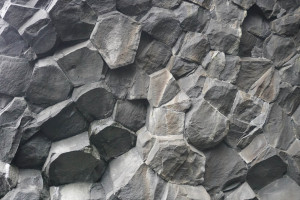 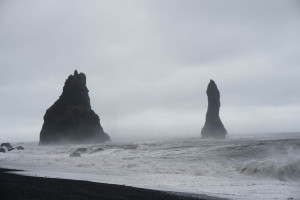 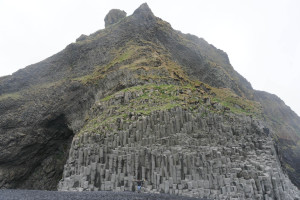 Properly wind-whipped, we made the short drive into Vik. Vik is one of the main stops along the ring road – it’s got a gas station and a grocery store! We refueled, refilled the water, and got a few extra groceries. We struck out on trying to get a fancy snack, so ended up back at the gas station for a cup of coffee and a soggy pastry. We watched bicyclists contemplating the wisdom of their decisions. And then it was back on the road.

Our drive today didn’t have any specific destination in mind. We knew there were a few things we wanted to check out, but the weather made some sites impossible to see, or too hazardous (stopping by a roadside in thick fog for example). However, we still got to see plenty.

The Fire Districts were first. The plains around us were covered with loopy, lumpy moss-covered masses as far as we could see in any direction. This was where the lava of Eldgja and Laki flooded across the sandur plains and devastated farmland. These two eruptions alone produced more than half of the magma volume erupted in Iceland over the past 1200 years. There was a pull off for curious travelers to walk around on the Laki flows and wonder at the variety of shapes and textures of the lava. Both of these eruptions were fissure eruptions – long lines of fire that spurted lava high into the air. We were unable to see the fissures themselves, due to both the weather and our lack of 4WD. 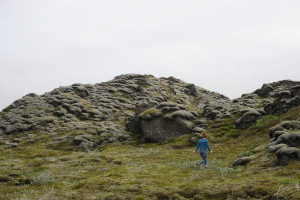 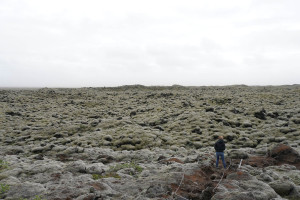 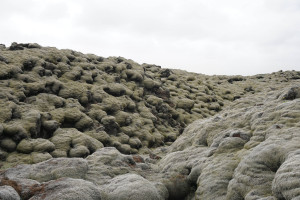 We stopped next at Fjathrarglujfur, a canyon that shows the end game for the waterfalls we saw yesterday – the waterfall is gone, having backed up to a lake, leaving a gentle slope to the coast. It’s a dramatic sight, with a twisting river snaking between tall cliffs. Looking out towards the coast, you could see the huge lava flows from the Laki eruption in 1783 AD. One of the amazing things about Iceland is that much of the landscape is so young – much of it long after the time of settlement. 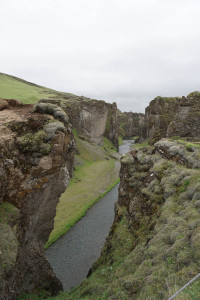 The road took us through the town of Kirkjubaejarklaustur which is home to the “church floor,” a location where the columnar basalt has eroded to create a smooth surface. There’s a lot of more modern history related to the site, but we couldn’t quite untangle exactly what happened at this site, versus what happened at other sites nearby. 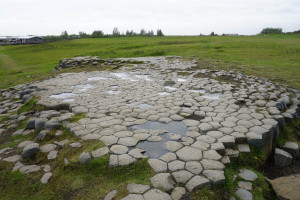 We continued across the windy lava covered plain and set the slopes of Mt Lomagnupur as our lunch goal. Luckily the sky broke just as we were approaching and we were able to enjoy a brief window of sunlight and mild wind as we cooked fancy ramen and enjoyed the view. Mt Lomagnupur features the highest cliff face in Iceland and has aprons of rock avalanches around it’s base. As an aside, fancy ramen means adding vegetables and a soft boiled egg to ramen from the Korean grocery back home (so many varieties!). 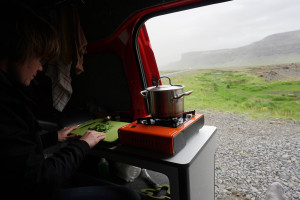 From here, things got rather intense, much like the circus (in tents .. hmm .. that doesn’t work as well in blog form). We had to drive across the Skeidararsandur plain. This is an immense outwash from a glacier on the ice cap. Just endless black rock and ash, kicked up by the wind into near dust-out (what’s the dust version of a white-out?) conditions. A slab sided Ford Transit doesn’t deal particularly well with 40mph cross winds either. White knuckled! Luckily, aside from the occasional oncoming car, there’s very little to run into.

Just across the plain, we had a “oh wow” moment, as we came into sight of Oraefajokull stratovolcano, with a glacier to its side and a rainbow connecting them. We drove a little further and saw another full rainbow with glaciers. And then, like a tease, the sun disappeared and the rain came in full force. 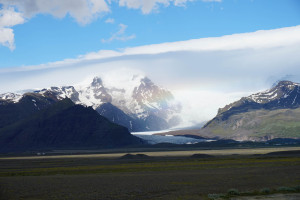 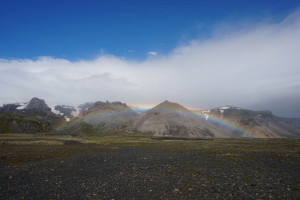 In spite of the rain, we pulled over at Jokulsarlon, the “Iceberg Lagoon,” which is caused by the retreat of a glacier, calving icebergs into the lagoon. It’s still relatively early in the season, so there weren’t too many Icebergs. And near-freezing rain meant we didn’t linger long. But I imagine on a sunny August day it’s quite a sight! 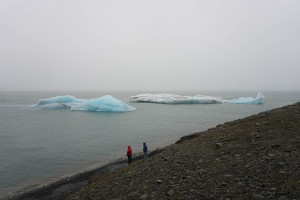 Finally, we made it to our overnight stop in Hofn. Hofn is known for langoustine, so we got all fancy and ate at a diner instead of in the van. A langoustine sandwich for Colin, fish and chips for Kat, and a milkshake to end the day. Now we’re set up at a small campground in Hofn, ready for another big drive tomorrow to the north of the island.

2 thoughts on “Iceland? More like … no actually Iceland is a pretty good name”