We woke up in Hofn to a much calmer, more pleasant world. The wind was gone, the rain was ending, and by the time we’d finished breakfast, the sun was shining. We hit the road around 8 with a goal of making it to the north.

Our first stop was Austurhorn, the core of an old volcano. A basaltic magma chamber is visible on the high ridge above, in the form of a wall of gabbro. But we parked out on the peninsula to look for the granophyre intrusion. We were looking for evidence of a basaltic magma intruding into a more acidic magma – blobs of dark material that quenched upon squishing into the older, colder light colored rock. It took us a while of jumping around on rocks with soggy sneakers to find a decent example not covered in lichen. But find it we did! Our first real roadside geology stop of the trip, unimpeded by bad weather. 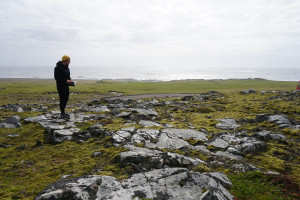 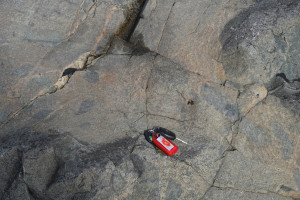 We wound our way around the mist and cloud topped fjords, catching glimpses of high peaks. Without the blinding rain we were better able to see the layer cake cliffs of the Tertiary basalt formation – the oldest rocks of Iceland that make up the far eastern and western edges of the country. A procession of waterfalls stair stepped down every face. One of them caught Colin’s eye and we stopped for a quick drone flight. 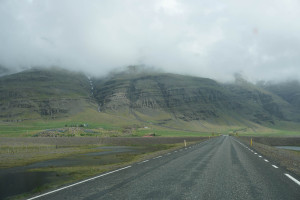 Our next goal was Djupivogur and a small cafe there that apparently sells nice cakes. The town was adorable and the cakes were quite delicious. Mission success. 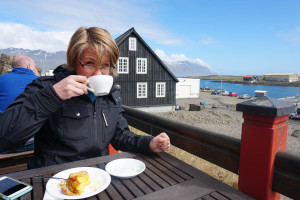 We hopped in the car and continued our drive through the eastern fjords. Kat’s main goals were photographs of dykes and corries. Vertical dykes cross cut the layer cake basalt lavas on the surrounding cliffs – they are the magma feeder tubes for the large eruptions. Corries are the gentle bowl shaped depressions at the tops of the mountains where tributary glaciers formed and fed into larger glacial systems during the last Ice Age. When the bowls of corries on different mountain tops collide, their intersection creates dramatic triangular points on the mountaintops. 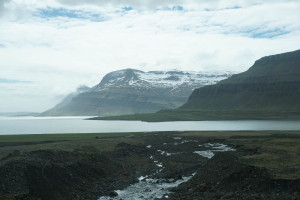 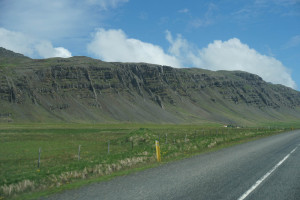 The road itself wound in and out of the fjords, sometimes paved, sometimes dirt, sometimes mostly sheep. It’s tempting to pull off to the side roughly every 100ft to snap shots of yet another epic view. We did end up pulling off for our lunch stop, mostly so we could climb up to a dyke and snap some photos. Our lunch, grilled Icelandic polish sausages with paprika potato chips and some Malaysian white coffee (purchased in Penang, naturally) was a pan-global feast. 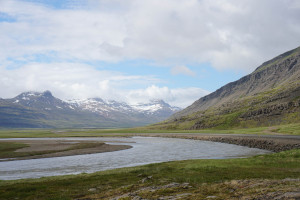 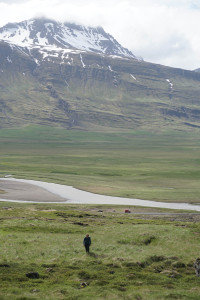 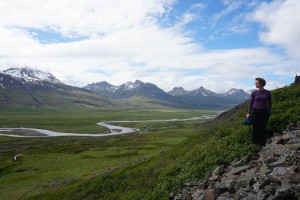 That stop was towards the end of our time in the fjords – from here, the road curved up into the mountains. While not truly highlands, it gives a taste of what the highlands might be like. Moving inland, we were traveling forward in time, from old rocks to younger rocks. 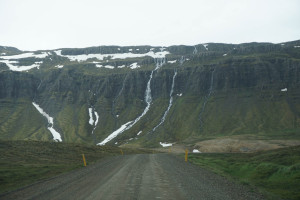 The trek across the high plains was gorgeous – very Swiss – but also lengthy. We stopped in Egilsstadir for some dipped soft serve cones and a red pepper, then jumped back in the van for the last couple hours. We had one lengthy detour to visit Detifoss, the largest waterfall (by volume) in Europe, which cuts through some impressive lava flows. 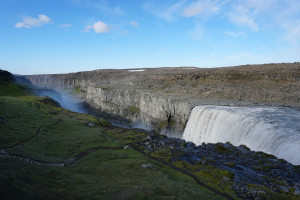 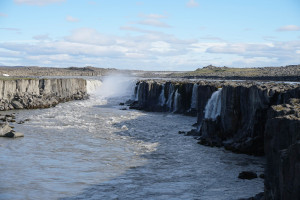 Detifoss is about 30km north of the ring road. You can access it from either side of the river, but only one side is paved. Not knowing this, we went a ways down the dirt track before realizing our mistake. Fortunately, the paved road is brand new and gorgeous, cutting through lava fields and then diving down to Detifoss. It was indeed impressive. Around a half a kilometer south (the river runs north) is Selfoss, an equally gorgeous waterfall. It missed out on being the biggest due to having some side channels which divert some of the flow. Poor Selfoss.

The last half our from Detifoss to the Myvatan lake area brought us to some of the newest bits of Iceland. We’ll explore the volcanic features more tomorrow. Today, we stuck to exploring the hot spring baths. It’s midnight now as we write this, and the sun is still keeping things nice and bright – we’re pretty far north at this point, and it’s solstice. Quite an experience!