We’re staying in on a town on Lake Myvatn. Myvatn translates as “Lake of the Midges” (as in gnats). This, I can assure you, is not an exaggeration. One does wonder why, after naming a place something like that, folks would continue to settle here.

Perhaps people settle in Myvatn because it’s unlike just about anywhere else on earth. It’s basically like Mordor, but real and not just tarted up New Zealand.

The plan for the day was to hike to Krafla. Krafla is a volcanic system, which was spewing fire as recently as the 1980s. It’s an area of lava flow upon lava flow, steaming vents, bubbling pools and many things which Kat said not to touch.

The plan started to go off the rails relatively early on. Myvatn doesn’t yet have much in the way of tourist infrastructure, and so the hiking trails are in some regards more notional than real. Leaving “town,” we ended up on some dirt roads, then briefly on the main road, then wandered around for a while. Eventually, we gave up and started digging around on the satellite view in Google Maps until we found what looked like trails, then made our way there.

The path hugs a fissure ridge going north from the ring road, where lava spewed out and covered the surrounding countryside in the 18th century. The path runs right along the top, letting you poke down into lava tubes, and get amazing views of the lava fields below. 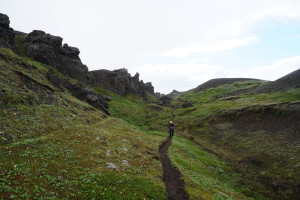 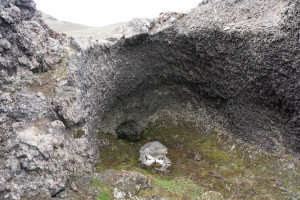 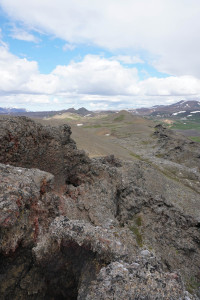 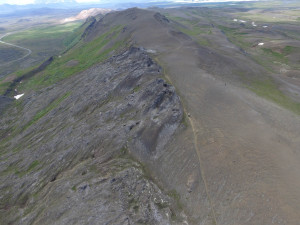 An hour or two into our hike, the rain moved in, which was rather unpleasant. The forecast had indicated it would be clear all day, so we were ill prepared, but we soldiered on. We could see lava flows form different eruptions, table mountains on the horizon, and a large rhyolite table mountain nearby.

Eventually, the path descended into the lava fields themselves, which was another new experience. An endless sea of lava, framed with snow capped mountains in the distance. It’s mesmerizing. The mesmer was broken by more rain however, this time more intense. Being stubborn, and having few other options, we slogged on, eventually making it to Krafla itself. The supposedly 13km hike (so says the town guidebook) was 17 miles (which is … some… kilometers) in reality. But, the payoff was worth it. 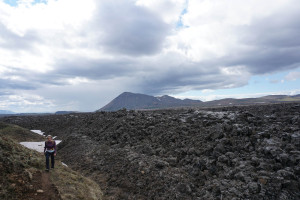 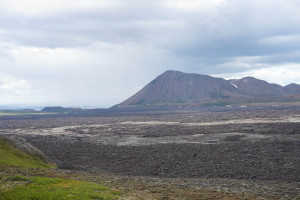 Approaching Krafla (the site itself is called Leirhnjukur), you first encounter a steaming slope of different colored clay. Since it was lightly raining, the clay covered wooden boardwalk was like skating on ice. The water interacts with the rhyolite to create a super fine clay. The Krafla volcanic system has seen a lot of activity in the recent past. There is fresh evidence everywhere of the Myvatn Fires of 1724-1729 and the Krafla Fires of 1975-1984. Long black lava flows tumble toward the lake. Within the caldera itself, the ground is still steaming. We hiked around billowing vents of glassy basalt. The rock here is so fresh that the glassy crust still shines and shimmers like an oil slick. Hot steam churns out all along the ridge and you can walk directly up to anything (as long as you politely stay on the path). The rocks are exceptionally lightweights since they haven’t been altered by weathering and they crunch lightly when you walk on them. And it’s massive. This was Kat’s favorite stop of the trip so far. 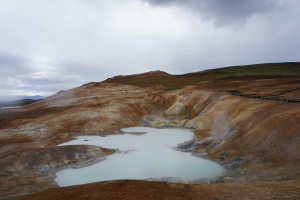 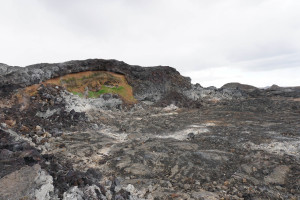 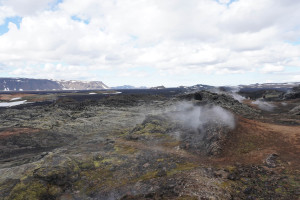 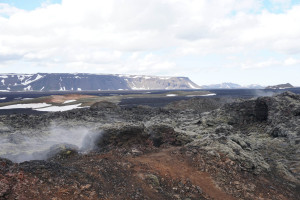 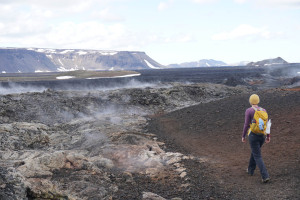 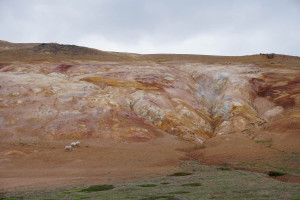 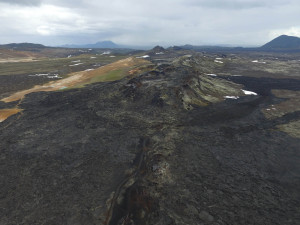 The weather was continuing to be unpromising, and a lack of toilets added to the pressure to leave. However, it was already late afternoon, and neither of us was loving the idea of another 17 miles back to town. So, we decided to take the road and stick out our thumbs. After fifteen or twenty minutes of being passed by traffic, a nice Spanish (?) couple stopped to give us a lift back to town. Saved!

We immediately devoured some N1 hotdogs, then grabbed the campervan and hit the hot baths for a well deserved soak. Feeling a little underaccomplished for the day, we decided to hit a few more sights before calling it quits. First up was the rootless cones at Skutustadir at the south end of the lake. These are created when lava flows over a lake. Eventually, the water flashes to steam and explodes upwards, creating what looks like a volcanic cone. We did some drone photography here, since they’re best seen from above, then it was back in the car. 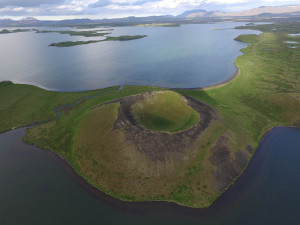 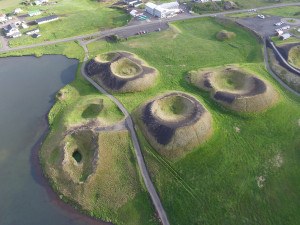 The next stop was Namafjall, which is just south of the Krafla site. It has some even more dramatic bubbling mud pots and steaming fumaroles, and its own distinctive smell. Once again, there’s no gate, no real signage, just some ropes subtly encouraging you not to both drown and burn, simultaneously, in a vat of superheated mud. 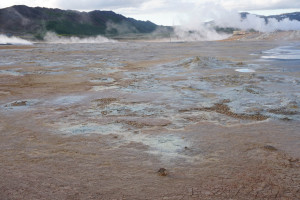 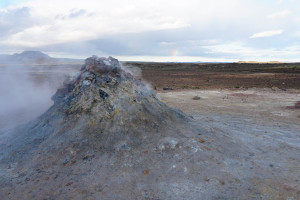 Finally, we visited the cone lake at Viti. Which was a lake in a cone. Honestly, at this point, we were pretty dead tired. We looked it, took and obligatory photo, then jumped back in the van for some velveeta shells and cheese. It was a long day, but well worth it. After seeing the old bits of Iceland yesterday, it was awesome to walk through bits that are younger than either of us.

1 thought on “Truth in Advertising”