Today was mostly about driving back towards Reykjavik, but we managed to sneak in some exploration as well. We woke up and flopped around a bit, before getting it together to make breakfast. We got fancy and fried some eggs, and toasted some of the local rye bread, which is actually baked underground in the geothermal heat.

After breakfast, we broke camp (you know, took off the handbrake) and set out for Dimmuborgir, a labyrinth of pilar-like structures formed after a temporary lava pond drained. It’s actually a very well developed site, with a nice cafe building and a paved parking lot. There are trails crisscrossing the site, including both easy and more rugged options. We wandered around a bit, and got some great drone footage. It was really fun to get lost in the maze, and climb up, around, and under different structures. Seen from above, you get a sense of how big the site is, which makes one feel very small. 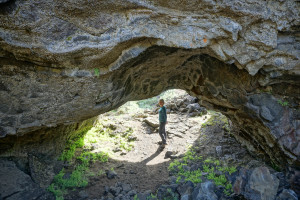 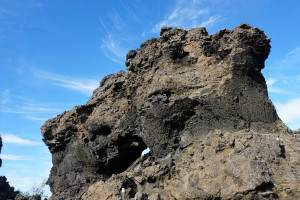 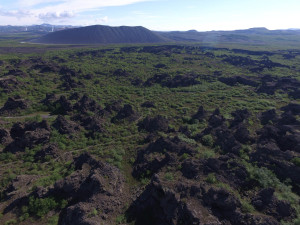 After exploring for a while, we’d worked up an appetite for second breakfast, so we popped down the road to the cow shed cafe. It’s a dairy farm and guesthouse with an onsite restaurant. You can actually sit at a window and look into the eyes of a cow being milked, as you eat your food. Which is an experience one rarely gets. We had coffees and cakes, and enjoyed the view of the lake.

From the cowshed, we went back down the road to Hverfjall, a massive tephra cone (over 1km in diameter) that erupted under the lake around 2800 years ago. We didn’t actually hike up to the top, but took some drone footage (and got a chance to show some curious kids in the parking lot how the drone works). 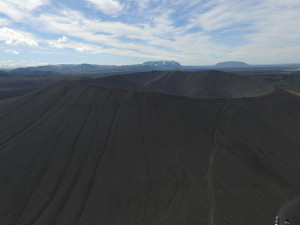 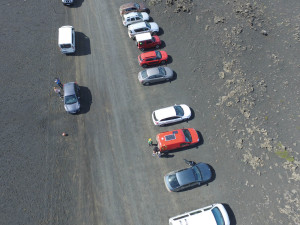 From Hverfjall, we hiked through the scrubland to Grjotagja, a lava tube with a hot pot in it. I gather it was featured in an episode of Game of Thrones. I’ve never seen Game of Thrones, but from what I know of it, I’m guessing the scene involved either sex, violence, or some combination of both. (Cue The Exploited). 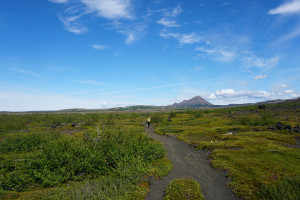 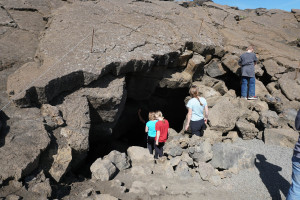 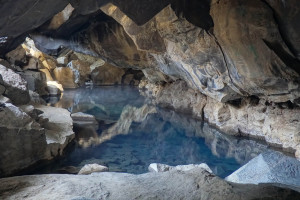 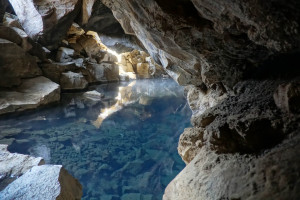 It’s a very fun spot, though visitors are no longer allowed to swim in the water. It’s got a magical quality to it – the long exposure shots capture the blue of the water, with steam rising off of it.

Back to the car, we hit the road for the Snaefellsnes peninsula. Along the way, we had plenty of sites to check out though! We stopped at Akureyri for an ice cream and a hot dog. It turns out it’s the second largest city in Iceland – 18,000 residents! It’s a big cruiseship stop though, so it’s very well developed with cute cafes and restaurants. Our ice creams were a bit disappointing (imagine a Dairy Queen blizzard, but made by someone who’s only read about the Blizzard via machine translated websites) but the hot dogs were up to standard.

Our first nerd stop after lunch was to take a photo of a cutaway through a caldera. Kat was thrilled because our photo is just like the one in the book – it actually matched! 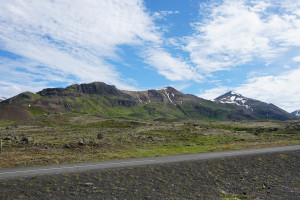 Our next stop was a little more perplexing. We were hunting for a particular gorge with a stream running through it. GPS got us close, but it still involved some poking through fields. This gorge is special, because the lava cross-section reveals tree moulds – areas where tree trunks and branches were enveloped. One lava flow killed the tree, and before it could decay, a second flow came through and preserved it. Think Pompeii, but with trees. After some scrambling, we found them .. we think. We found tree root looking holes in lava. 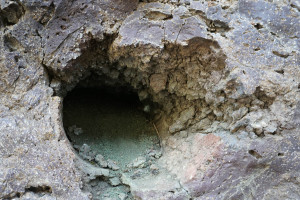 From there, we hit a bit of site fatigue, and just wanted to get some euromiles (kilometers) behind us. We rolled into Borgarbyggd around 8, and got ourselves dipped ice cream cones (to make up for our earlier disappointment) and then visited the town bath. This isn’t a fancy hot spring, but more of a community rec center. It was delightful – the baths are still plenty hot (geothermally heated) and it was a bargain. Our campsite doesn’t have showers, so it was a great chance to get cleaned up and relax a bit after sitting in the van for many hours. 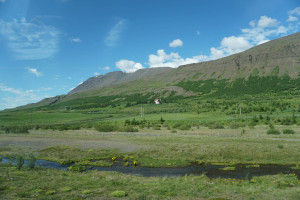 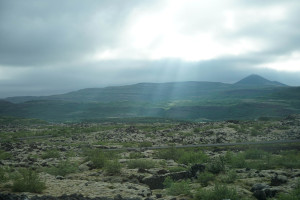 Tomorrow, we’re going to try to squeeze in a lot into a limited amount of time. We need to be back in Reykjavik in the evening, so we’re going to get a very early start to explore the Snaefellsnes. It’s odd to be back into an area that feels more modern – where paved roads intersect other paved roads. We’re not sure how we feel about that.