For our last day in Iceland we booked an Inside the Volcano Tour. Since we had to return the Happy Camper first, we pushed our tour back to 1 pm. This turned out to be an extremely good move since our morning did not go as planned.

The night before, we had taken all the dishes inside to be washed and cleaned out the van to get it all ready to go. However when we arrived at Happy Camper (45 minutes away), we realized we had forgotten the rented inverter back at the apartment. We drove back to Reykjavik, Kat jumped out and handed off the inverter, then Colin continued back to Happy Camper. Our paths diverged.

Kat was given the more enjoyable task of procuring baked goods, sandwiches and doing a load of laundry while Colin had to return the van, catch a shuttle to the airport, and a bus back to the apartment. Kat enjoyed a nice stroll around town, a visit to two bakeries, a sit with a dog while waiting for the grocery store to open, and an organ concert at Hallgrímskirkja.

Fortunately, plans from here went better. Colin made it back around 11:45, with some time to spare before our 12:15 pickup for the tour. The sandwiches and baked goods were delightful, and the clothes smelled modestly better.

The tour involved a mini-bus pickup at our apartment, with a transfer to a larger bus at the bus depot, then a 30 minute ride out of the city to a ski lodge. From there, it was a two or three kilometer walk to “base camp,” at the volcano. It was a very well built trail over lava flows and gorgeous mosses and lichen. 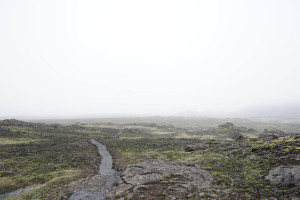 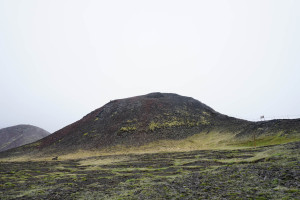 Base camp turned out to be a pretty swanky place – a few very nicely built-out shipping containers. Kat made the first exciting discovery when she went to pick up what she thought was a dog toy near the entrance. A little creature moved a bit – it turned out to be a baby arctic fox that lives there. Apparently the arctic fox population is big enough that it is periodically culled, and this one had lost its mom and moved in with the guides. It was very snuggly, and let Kat give it a pet, which was a bit of a highlight. 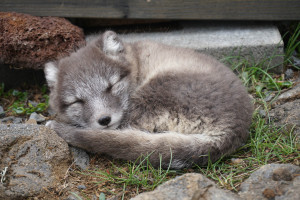 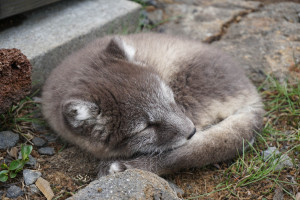 The trip into the volcano itself is done in groups of 6 or 7 at a time. They’ve modified a window washing elevator over the rim of the volcano, so you clip in with a safety harness and then drop the 150 meters down into the collapsed chamber. It’s a massive space, beautifully lit. We were expecting a tour, but instead we were given some brief safety tips and an introduction, and then let free to wander for around half an hour. 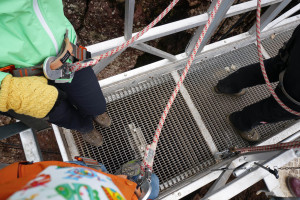 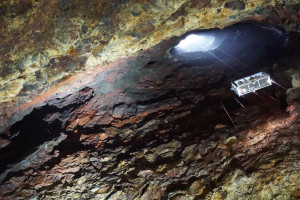 The Thrihnukagigur volcano erupted 4,500 years ago and sits on a fissure in line with two other large vents that date back to 50,000 years ago. This younger splatter/scoria cone was fed by a dyke that is amazingly visible as a large black arch that extends from both sides of the cave, and meet up at the top where the lava actually poured out of the vent. The chamber we were exploring was formed by the partial collapse of the walls of the vent. Usually this collapse is fatal to the internal structure and we had already explored many scoria cones in Iceland with large sloping central craters. In this case, just the inside had collapsed and we were climbing around on blocks that had fallen from the walls and ceiling after the eruption had ceased. 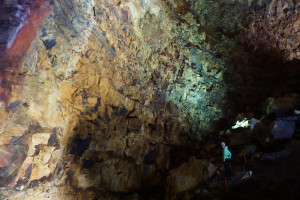 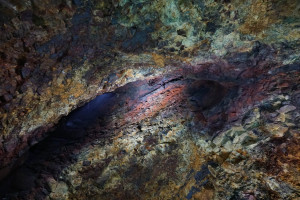 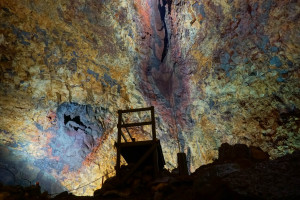 This truly is an amazing site. The walls are beautifully colored by iron, sulfur, copper and calcite. A small magma body is visible in cross sections as the ‘black rose’ high on the chamber wall. The original ground surface created by the older 50,000 year old volcano is also visible along the base of one of the sides. Colin touched it only to find it crumble beneath his hand. The older volcano was formed under a glacier by the explosive interaction between water and magma. This creates hyaloclastite, a fine powder-like material that then gets glued together into a very soft crumbly rock. 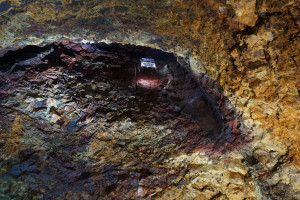 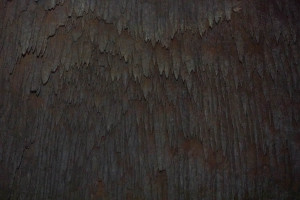 Geology aside, the space is simply beautiful. Water droplets steadily drip down into the cave. One of the men who runs the site is a photographer who has lit the internal features so you can really see the lovely colors on the walls. And the mouth of the vent is covered in lavacicles, where the hot lava ran back down into the mouth of the volcano after it was finished erupting. An exceptional place.

After our dip down into the chamber, we had to wait for the next two groups to finish their explorations. We were greeted at base camp by hot lamb soup and the curious arctic fox pup. There is also a path out of the back of base camp that leads to some interesting lava bubble formations. 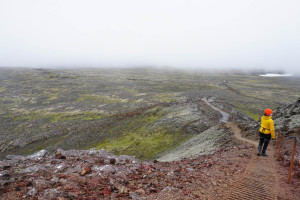 We were back in Reykjavik by 6:30pm, and after a shower (unlimited, guilt free hot water is amazing), we went back out on the town. Iceland is competing in the Euro 2016 soccer tournament at the moment, and there’s a large screen setup in the town square so people can watch. We watched for a bit (Iceland doesn’t play next until Monday, but there was still a big crowd) and grabbed a hotdog. Then we met up with the Haunted Reykjavik tour, which we’d seen a sign for the night before.

We figured a ghost tour would be a fun way to get a guided walk around the city. Our guide was a lot of fun – she’d spent some time living in the US, and our whole group turned out to be Americans. We walked around town, learning about the folklore, ghost stories, and general Icelandic history and culture. Iceland elected a new President on Saturday, so we got to look in on a polling place as well. Elections on a weekend, imagine that. 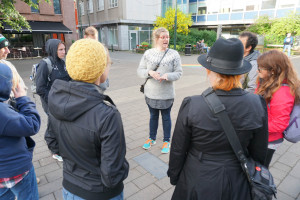 The tour wrapped up around 10:00, leaving enough time to get some ice cream cones (this time, dipped with candy toppings). Then it was back to the apartment to pack and get to bed.

Our airport transfer bus came at 5:00am, and after a bit of a zoo at the Reykjavik airport, we made it to our flight. Now we’re somewhere over Canada.

It’s been a fantastic trip, and gave us a taste of many things we’d like to explore more deeply on a future visit. There are huge parts of the country we haven’t seen (or have barely seen), not to mention outlying islands. And we are still deeply uninformed about the Icelandic culture. We’ll just have to return!

1 thought on “So long, and thanks for all the rocks”