We’re back, the lawn is mowed, and the dog is back to being her typical depressed self (having been briefly, ever so briefly, happy about being home). Before the trip fades, we wanted to share some of our notes on exploring Iceland in a campervan. 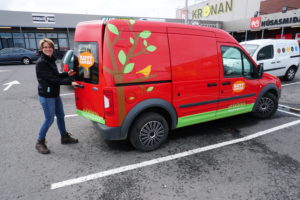 As a reminder, we rented from Happy Campers. We got a “Happy 1,” their smallest vehicle. Ours was a Ford Transit. First off – pretty much all the rentals you’ll find will have manual transmissions. The fellow from Happy Campers said that sometimes ends up being a deal breaker for Americans who show up expecting an automatic. Ours was a diesel, and got perfectly decent mileage. In the back, they have a bench which converts into a bed, along with a kitchen area containing a fridge, sink, and a camping stove. There’s also cutlery, plates, a pot and a pan. Pretty much everything you would need. The fridge runs off its own battery, recharged by the van and the solar panel on the roof, so there’s no problem with keeping things cool all the time. In fact, we had ours set too cold initially, and froze some items. The van also has an auxiliary heater, which burns a little diesel, which can warm the space up before bed. It’s very effective.

We also rented camping chairs, a small grill, and a camping table. We wouldn’t do that again. The grill wasn’t particularly effective by ‘merican standards. We found that most of the time, it was either too windy, too cold, or too buggy to want to sit outside and lounge around at the campsite. And, because the sun never sets, we often didn’t pull into our camping site until 10 or 11 at night, at which point we just wanted to eat and get to bed.

We were traveling with a fair amount of technology – two phones, a laptop, a camera, a drone, and an Apple watch. The van has a single 12v port. We rented an inverter from Happy Campers, which allowed us to charge the laptop and drone batteries, and also brought a dual port 12v USB charger. We also had a small USB solar panel and a large usb battery.

Because the van had a single port, and it was only powered when the van was running, there was a need to be strategic about charging. On sunny days, we used the solar panel to top up the USB battery, which could be used to charge our phones overnight. We weren’t using the laptop much, so it only needed to be charged every couple days. We also took advantage of any cafe or campsite hangouts to top up batteries when we could.

The drone batteries were the biggest hassle, since they take ages to charge and don’t love running off the inverter, but we had enough batteries that we could make it work.

We brought a bunch of food from the states, having heard about the high prices and limited selection. In reality, that was overblown a bit, but it was still nice to have a starter kit. We brought just under 7lbs of food total (Kat weighed it), including a variety of ramen, velveeta mac and cheese (no milk needed), pasta, and granola bars. One of the best things we brought was a bag full of hot drink options – tea, starbucks instant coffee packets, hot chocolate, and some Malaysian white coffee. It was great to be able to have a hot cup of tea in the van after a hike in blowing rain.

We made an initial stop at Kronan to get fruits, vegetables, pasta sauce, yogurt, hotdogs, eggs and cheese, and did a few more stops along the way. Prices aren’t crazy, though it’s definitely not cheap. Icelandic dairy products are really excellent – we loved the yogurt, butter, and the local cheeses (nice stinky blues and camemberts). Don’t miss them! We kept a supply of hardboiled eggs for hiking snacks. And of course, we bought lots of Icelandic snacks – paprika chips, various cookies and candies – all the requirements of travel abroad.

The van holds enough water for a couple days, and it’s easy to refill (there’s a hose behind every gas station). Many of our dishes just involved boiling water, though we did occasionally use both the pot and the pan – fancy!

If you research a trip to Iceland, you’ll hear a lot about the shelter law which says you’re allowed to camp for a night on any land. That law made a lot of sense at one point, but it wasn’t taking into account 1.2 million tourists per year. Even though you can legally camp almost anywhere, especially in your camper van, please don’t.

Iceland is fully of great campsites, which are very affordable – around $15/night total. They’ll have showers and bathrooms, and many will have kitchens and cafes. Almost every town has nice public baths as well, if the campsite shower isn’t to your liking.

As we noted a few times when traveling the country, Iceland doesn’t have the infrastructure for the number of tourists it’s now seeing. This is especially noticeable when it comes to bathrooms. You see a lot of toilet paper when hiking. From reading online, it sounds like some of the more popular campervan parking spots are similarly overrun. Now, if Iceland wants to continue with this type of tourism, they’ll need to build up some of this infrastructure at the popular sites. But that doesn’t give a traveller an excuse to litter – you carried the toilet paper in, carry it out (see the note on plastic bags a little further down).

As Minnesotans, we’re used to spending a lot of time talking about weather. And quite honestly, none of the weather Iceland could throw at us was worse than what we’re used to in Minnesota. However, it changes with a striking amount of frequency. Days routinely went from bright and sunny and calm, to storming and gale force winds, and back to sunny. Sometimes in a matter of an hour or two. Up in the mountains, it got chilly, but not February-in-Minnesota chilly. Gloves and a hat, a decent raincoat, and a layer or two of clothes was all it took. A fancy wool sweater completes the look.

The Iceland weather app is helpful for knowing what to expect. It seems like common sense, but be sure to pack smart for any extended hike. We saw hikers setting out on lengthy walks ill-prepared for a sudden change. Water is drinkable everywhere, but you should still carry enough food and water to stay safe if you need to hunker down. Most long hikes will have emergency shelter huts as well. Install the Iceland 112 app as well, which can help with requesting emergency aid.

Credit cards are accepted literally everywhere (except the ghost tour – that was the only exception). Make sure you’ve got a card with a chip (you should by now). AMEX is a bit less accepted, though still probably more accepted than it is in the US. Gas pumps want to know your PIN and none of them do AMEX, so be sure you know it – for some banks, the PIN for your chip will be different from the PIN you normally use at an ATM.

It’s actually kind of strange – the whole country runs on credit cards, even for small transactions. It seems like that would mean some crazy proportion of GDP goes to VISA?

There are three cellular networks in Iceland – Siminn, Nova, and vodafone. T-Mobile customers will be able to roam freely on all of them. Other folks should consider getting a sim. Siminn has the best coverage, and sells a data-only 4g sim with 1gig of data for around $18. The convenience store outside baggage claim (not the duty free store) at KEF sells them. Most of the places in the countryside that claim wifi have that infuriating sort of wifi that works just enough to make you think it might be working, but isn’t actual usable.

Other Stuff To Pack

We were very happy to have an assortment of ziplock bags, from small to large. Also, dog poop bags (or a similarly compact roll of plastic bags) make for great van trash and hiking trash collectors.

1 thought on “Traveling Iceland in a Campervan”