Hanoi at 72 degrees and sunny is a far more enjoyable place than Hanoi at 115 degrees and chewy. Today was a near perfect day to wander the city and get the lay of the land. We started things off, as one must, with some breakfast pho. Oh, and a pug, in a sweater, sitting in a window. Then we went to the Viettel store to get ourselves some sim cards. Then it was really time to start our day. 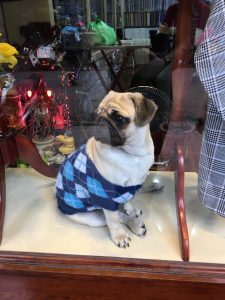 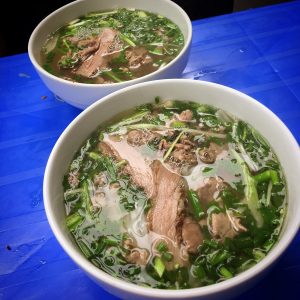 Our intention was to visit the National Museum of Vietnam. On the walk there, we passed a man cutting a child’s hair on the street corner. He asked if Colin wanted a haircut. He’d meant to get a haircut before leaving on this trip, and ran out of time, so hey, why not? 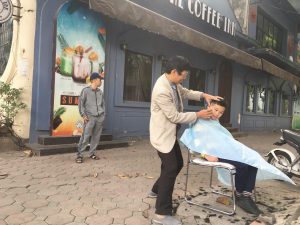 While waiting our turn, we got to chat with the child who’s hair was being cut. His name was James, and he spoke excellent English. He told us about his favorite foods, and was very interested in hearing our opinions of Hanoi. We also chatted with some young Malaysian men who strolled past. James was very interested in Kat’s blond hair, and wanted to know about her family. He was a perfectly charming young man. 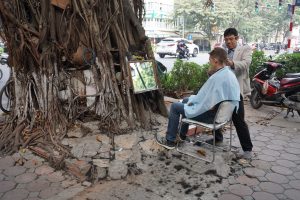 The National Museum turned out to be closed today (the first Monday of the month) as was the nearby Geology Museum. Working our way down our todo list, we hit upon the Vietnamese Women’s Museum, which chronicles both the traditional role of women in Vietnamese culture, as well as their role in the fight against the French and the Americans. We read about many incredible women, fighting for the liberation of Vietnam (there’s always some cognitive dissonance reading accounts of the war from the Vietnamese perspective). 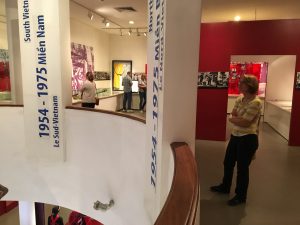 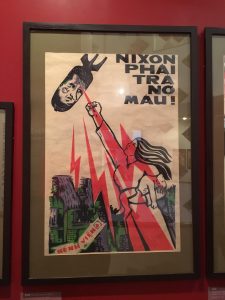 By the time we were finished at the Women’s museum, we were ready for some lunch. We stopped at a hot pot restaurant – they provide a bowl of deliciousness over a chafing candle. Through some magical process, as the bowl heats, soup appears in it. It doesn’t make a ton of sense. But it’s delicious! 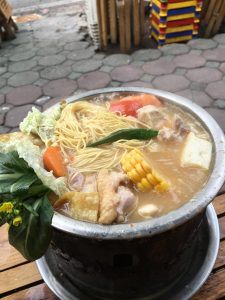 After lunch we passed a woman frying corn cakes. We purchased something from her basked and bit inside only to find a fried banana (Kat’s favorite). We enjoyed our happy surprise en route to the Hoa Lo Prison (the “Hanoi Hilton”). The exhibit is mostly focused on the way in which the Vietnamese prisoners stayed strong in their communist ideals despite the horrible cruelty of the French. The brief touch on the history of American imprisonment leads one to believe the prison was more like a hotel where the Americans pilots hung out and played basketball until the end of the war when they were sent happily home.

After a quick stop at the apartment, we set out for Huu Tiep Lake, with the remains of a downed B52. Along the way, we passed the Vietnam Military History museum, which was supposedly closed today. It was not, so we stopped in. The exhibits are older, and mostly directed at a Vietnamese audience, with a large focus on the French occupation. The Vietnamese have a long history of invasion by outside powers dating back thousands of years. The final room of the museum was filled with examples of international support for the north Vietnamese against the U.S. invasion. Looking at these photos and documents, you could learn a lot about the geopolitics of the 1960s and 1970s. Children in Brazzaville (Republic of Congo) holding signs supporting the North Vietnamese, etc. 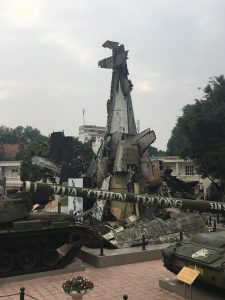 Continuing our walk towards Huu Tiep Lake, we weaved in and out of the alley ways of the city, running into dead ends, friendly dogs, and lots of scooters. The lake itself isn’t particularly impressive – it’s more of a “see it to say you saw it” sort of destination. To prove that point, there was a group of young English-speaking women there checking it off for a scavenger hunt. But it was a good chance to explore. Somewhere along the path of this walk, both of our phones stopped working, which indicated that perhaps all was not right with our new sims. A stop back at the Viettel store, wherein an employee did something magical, resolved the issue.

Since we were already in the Old Quarter, we decided to stick around for dinner. We got some bahn mi’s at a place recommended by our AirBnB host. On our walk, we passed “Obama’s restaurant.” Sadly, based on the dearth of customers, Obama’s restaurant seems unlikely to last much longer than his legislative achievements. 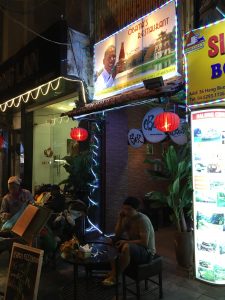 We ended the night with a chocolate coffee pocket and a stroll around Hoan Kiem lake, watching people of all ages enjoying the mild weather. As we wound our way around the lake we passed through a gauntlet of bride and grooms having their ‘night lake’ photo shoots. 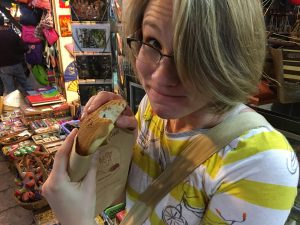 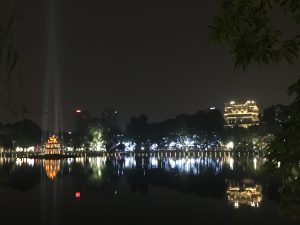