We decided to spend the sunniest day in the area around West Lake, the largest lake in Hanoi. We walked north and stopped for our first coffee. Fortuitously, a banh mi lady set up shop on the corner in front of us. These ladies carry around little stoves and all their ingredients and wander around until someone asks for a sandwich. Colin ordered two banh mi for us and we watched her scramble eggs with herbs and grill the bread. Breakfast banh mi is, as far as we know, unavailable back home. But it should be. 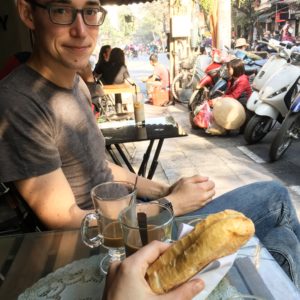 We continued our wander north until Colin got a bloody nose – we took a break on a stoop and watched some dogs play on the sidewalk. There are a lot of dogs in Hanoi and many of them wear little sweaters. Most of the pets are mixes of toy breeds but we have also run into a dalmatian and a few huskies. Eventually we continued our wander north until we reached the lake. 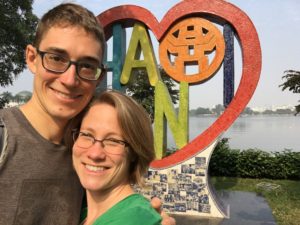 Our first stop was Quan Thanh Temple, an ideal place to take some quiet time. Colin read while Kat sketched and painted. After a while, we headed across the causeway to the Tran Quoc Pagoda, which dates to the 6th century, at least symbolically (neither the current buildings, nor the current location date to the 6th century). As Americans, we tend to be impressed by age and fixate on it, but in places where templates are made of wood and constantly rebuilt for hundreds or thousands of years, dates become somewhat more fluid. 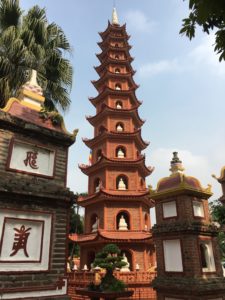 Feeling snackish, we walked a block to a fancy coffee shop and had some frappucino-type iced beverages on the rooftop overlooking the lake. After a good long bask in the sun, reading and painting, we were ready to continue on. We got some lunch – no idea what the dish was: lots of vegetables sautéed with some beef, served on some sort of seasoned rice – and then headed to Vietclimb, Hanoi’s premiere (only) climbing gym. Colin wanted to stop in, having been there on the last trip. And, after a week without climbing, he was itching for some bouldering. There were a few other climbers there – not a lot of english spoken, but beta is a universal language. 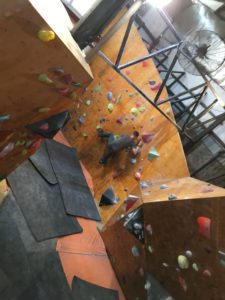 An hour of climbing meant we could reward ourselves with some iced coffee and a leisurely stroll to the Temple of Literature. Unlike most of our other destinations, this one is definitely on the tour trail – lots of tour busses unloading, groups following flags, and so on. The complex itself isn’t particularly jaw-dropping, having been blown up in various wars (mostly by the French, for what it’s worth). We were interested in the carved stele, recognizing doctors for having completed their exams and embracing study and wisdom. Maybe this is a practice we should bring back. 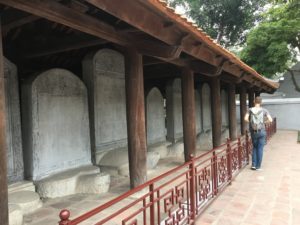 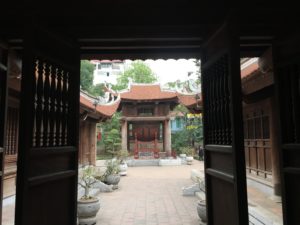 By late afternoon, we were ready for a rest. We had another coffee, and then stopped back home. Colin got another nosebleed (don’t worry mom) which took ages to stop. We ventured out for some chicken pho (Pho Ga) but we’ve mostly stayed in tonight. Tomorrow, we head to Ha Long Bay bright and early. 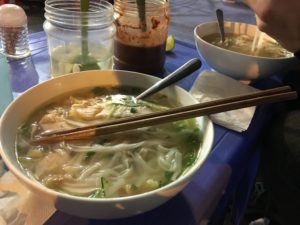