(’cause it’s pronounced “way”. Get it? Super witty)

Catching up on our blog a day late, on account of being dead tired yesterday.

Yesterday morning, we flew from Hanoi to Hue, the old capital of Vietnam, and the scene of multiple intense battles in the war. Hue is about 40 miles south of the DMZ, so we’ve crossed over into “south” Vietnam.

We’re staying at an actual hotel – it’s a nice place with a very friendly staff and a fancy veneer (we can see the sky through holes in the ceiling of the room, which does slightly ruin the effect). After check in, we set out for a wander. The city is dominated by the Citadel which is surrounded by a moat and thick walls and sits on the north side of the Perfume River. Inside the Citadel is both the Imperial City, as well as just normal neighborhoods. 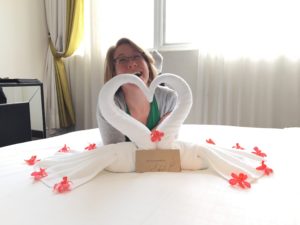 We went north across the river and visited Dong Ba market which spills out onto the riverfront. It’s a large, crowded market, and the stall holders are more aggressive than in Hanoi. We wandered around, but didn’t linger too long. 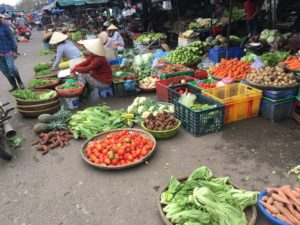 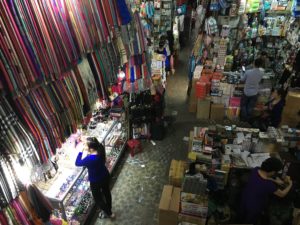 From the market, we crossed a canal into a smaller residential area, bounded by a curve in the river. We were looking for lunch, but found that we were mostly in among houses. Since Hue doesn’t have the density of Hanoi, there’s not as much (as we would say) mixed retail and residential. This neighborhood was once home to Hue’s Chinese community and there are a number of assembly halls that greatly resemble those we saw in Penang. 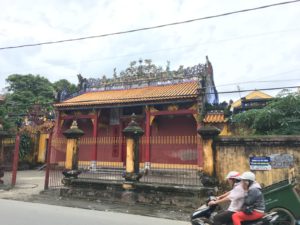 By this point, we were eager for lunch, so we crossed back to the market, where we’d seen food stalls. We settled on a busy stall selling bun bo hue. It was very different from other versions of the soup – far fishier and honestly not that great. We later found out it was a stall that Bourdain had eaten at on his recent Parts Unknown episode. I think that marks the third time we’ve accidentally eaten the same place as Bourdain.

After lunch, we loaded up on mixed candy at the market, and then went to the Imperial City. The Imperial City was more or less totally flattened between the wars with the French and the Americans. Walking around, it has the vibe of visiting an ancient archaeological site, with fragments of walls poking out of the ground. Then you realize that just 70 years ago, this was a functioning, gorgeous palace compound.

A few buildings have been rebuilt, many housing coffee shops or gift stores. The few buildings that were left standing are pocked by bullet holes. The narrative content is all pretty rundown and hard to follow, but the site itself is perfect for sitting, watching, and reflecting. Bullet holes are sprayed across walls and craters cover the landscape – all softened by grass and punctuated by arched tiled gateways. Kat did a painting while Colin read, catching fragments of conversations from tourists wandering by. 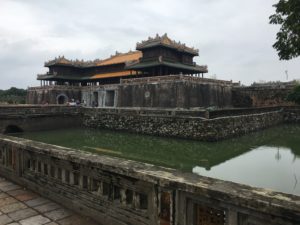 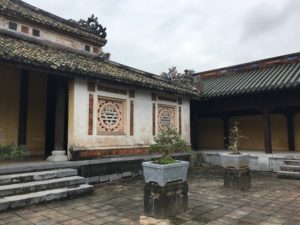 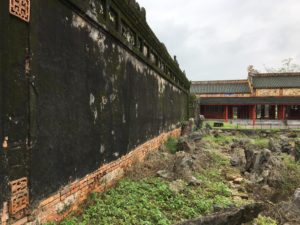 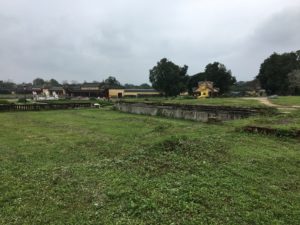 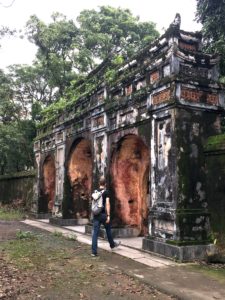 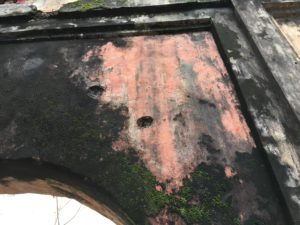 By mid-afternoon, we were feeling some travel fatigue (it was a very early start in Hanoi). We went to the fancy Highlands Coffee across the street for a fancy iced coffee and a chance to regroup. We’d been a little disappointed about struggling to find an awesome lunch stop, so we turned to the blogosphere for help. Thankfully, we found a great post from Legal Nomads which pointed us in the right direction. We went to Le Thanh Ton Street, not far from the Imperial City (still inside the citadel) and hit the jackpot.

We walked the length of the street, taking in our options. Banh ep and Banh trang trung, both mentioned in the Legal Nomads post, seemed like excellent starter snacks. Banh trang trung is a pizza-like dish made of rice paper grilled over coals with pork, shallots, and a squirt of eggs. Banh ep is cassava flour with filling, sandwiched between iron plates and heated over the coals. It’s got a gummier consistency. We were thrilled. 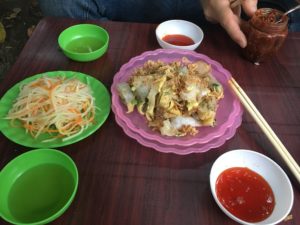 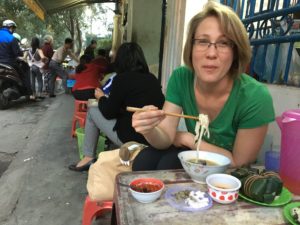 Our next stop was a stall making some sort of fish-based noodle soup. We had walked past this spot before and made a mental note when we saw the man making rice noodles to order – throwing them right into the bowls. We definitely hit the jackpot on that one – salty, savory, spicy, all perfectly balanced.

We took a slow wander back through the city, along the river, and eventually back to our hotel. We settled down early, and watched the Parts Unknown Hue episode (where we discovered that we’d just shared a meal with Tony) and relaxed for a bit before an early bedtime.