We’re a bit delayed with this last post, due to the … unpleasantness. But, better late than never!

Although technically our flight home was on Monday, it was very early in the morning, so Sunday was our last real day in Italy. We knew we had to be in Rome around 10pm to return the rental car, but the rest of the day was up for grabs.

Atrani has a couple different bars, which we’d been working our way through the previous mornings. The first bar we visited had excellent pastries, but a barista who wasn’t too interested in chatting. The second bar had so-so pastries, but a very friendly barista who told us all about town. For our last morning in Atrani, we did the obvious thing: went to both of them. Fully caffeinated and pastryified, we cleaned up our apartment and said goodbye. We put our bags in the rental, and then set out for a hike. 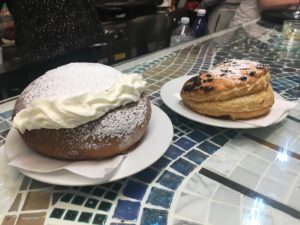 Our destination was Ravello, a hilltop town about 1000 feet above Atrani. Ravello has long been a destination for artists and musicians, and is a popular tourist stop. Kat had been there with her sister Caroline on their previous visit, and we wanted to return.

The hike involved a steady climb out of Atrani on a very nice path. We got to watch the goings-on of the valley – some men coaxing a three wheeled Piaggio Ape up a very steep incline, people tending to their gardens and checking their lemon trees, and sheep and horses clinging to very steep hillsides. 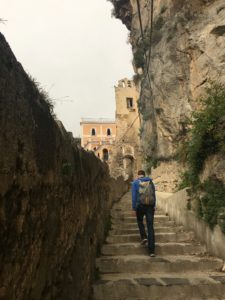 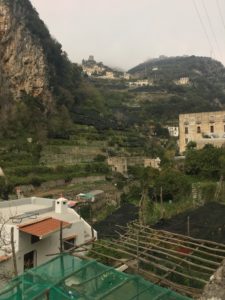 We made it to Ravello right as church was letting out, and the town was congregating in the main piazza. We had a coffee and a zeppole with the rest of the crowd. Fun fact, which we learned later in the day: zeppole are specifically made for St. Joseph’s Day, which is March 19th.

Our true goal in Ravello was to find the restaurant Kat ate at on her last visit. She had a vague memory of the interior, but no real sense of where it was in town. We wandered for a while, before turning to technology to study interior photos on tripadvisor. That helped us narrow it down, and when we finally poked a head in, Kat instantly knew we were at the right place. It’s a small restaurant run by a grandmother, her son, and a variety of other family members. We arrived right as some members of the extended family were arriving for their Sunday lunch. Because if grandma runs a restaurant, you go to grandma’s restaurant for lunch instead of grandma’s house.

We were handed some menus (handwritten of course) but then granny came out to say “If you’d like, I can just make you some plates of the things I made today for us.” So uhh, yeah. We did that. She brought us some prosciutto and homemade bread, and then some lasagna, cannelloni, and some other delicious-but-unknown item. When we’d cleaned our plates, she was concerned and asked if she could get us seconds. Completely stuffed, we didn’t have room for dessert, but she made us eat another zeppole anyways. In short, this was a pretty awesome meal. 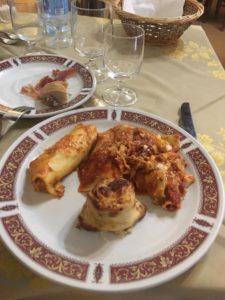 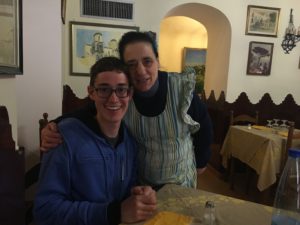 Waddling out, we made our way down the hill and back to Atrani. With so-so weather, and a number of hours to kill, we decided to hop in the car for an excursion before heading back to Rome. Our destination was Paestum, a Roman/Greek city on the coast.

Paestum was founded by the Greeks about 2500 years ago, and then taken over by the Romans a few hundred years later. The Romans left the Greek temples and tombs untouched. It’s a really large site, in amazing condition. Visitors are free to just wander. For the locals, it’s a place to come for a picnic and a gelato, and to relax on a sunny Sunday. It’s basically the way the we treat Fort Snelling, except instead of a 1970s recreation of an 1820s fort, it’s a complete 2500 year old city. 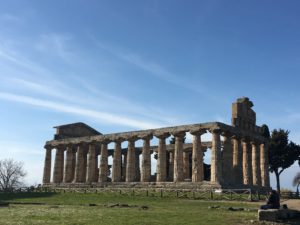 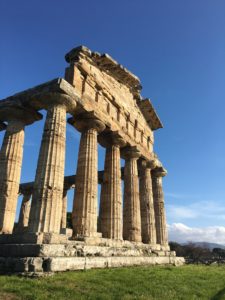 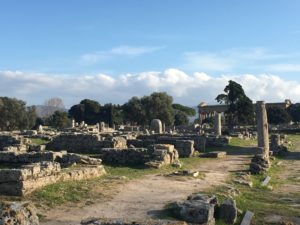 Because it was a Sunday (we presume) there were also historical reenactors on site. We watched a gladiator battle, and then got to walk through the forum and visit the different shops. A nice Italian teenager helped translate for us, so that we could learn about the Roman medical instruments and games. 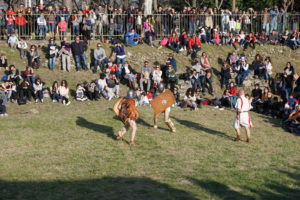 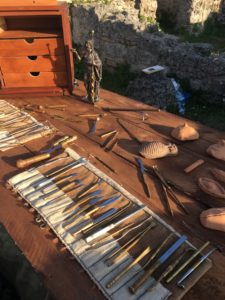 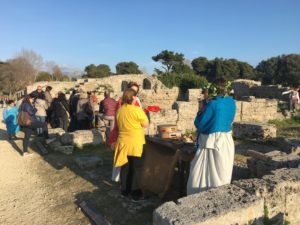 With one final gelato under our bulging belts, we hopped in the car and headed back to Rome, for a near-perfect* end to a completely wonderful trip. 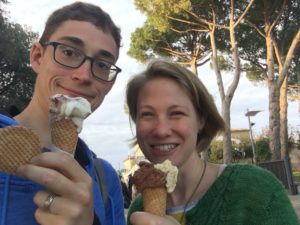 1 thought on “Grannies and Greeks”